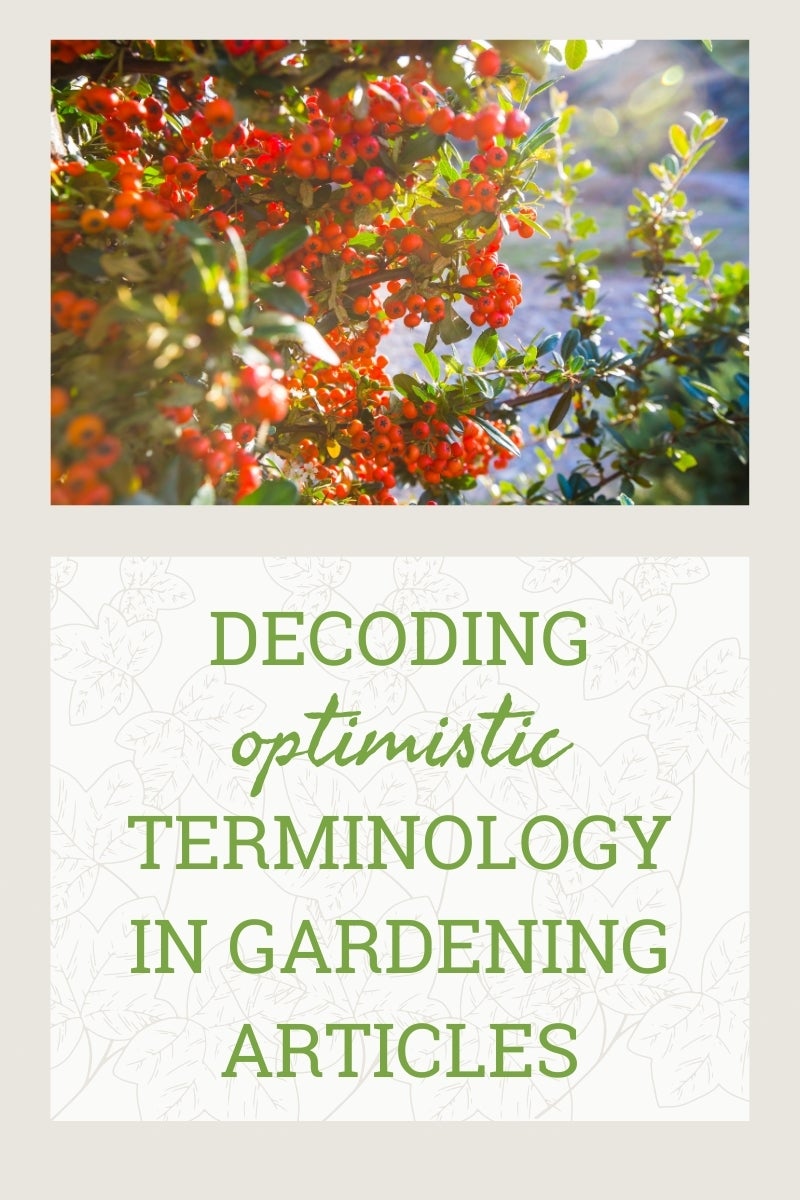 Experienced gardeners are not always impressed by the optimistic terminology writers sometimes use to write about plants, and their reactions vary. I know some gardeners who snap shut their laptop when they read that English ivy “can be a touch aggressive” or that firebush thorns “have been known to scratch.”

Others react like me, bursting into peals of laughter. As a garden writer, I know the push to paint appealing word pictures of plants. I mean, I once wrote that using cow manure as a fertilizer “might dim the fragrance of your roses,” when I should have said that your yard will smell like a barn for the next month.

But that’s garden terminology for you, and why not seize the opportunity to laugh? Here are other garden terms that evoke a different response than the writer was aiming for.

Scratch the surface of gardening blogs’ optimistic terminology – the pretty word pictures of plants as described in garden articles. You are sure to find cause for mirth.

If you don’t find it funny when English ivy is described as “a touch aggressive,” it’s only because you’ve never had it in your yard. It is incredibly aggressive, climbing up anything it can reach, including the stems of tall poppies, the lawnmower, and even your leg if you stand near it for more than a few minutes.

And firethorn? It’s true that it “has been known to scratch,” but that hardly describes the scope of the issue. I mean, people use firethorns to create impenetrable defensive hedges guaranteed to keep burglars and hungry deer at bay.

Once I tried pruning my firethorn without long sleeves and gloves. My arms and neck and torso ended up looking like a Death Eater had performed Severus Snape’s lacerating sectumsempra curse.

And what about plants that are touted as attracting wildlife? This one always makes me think of my friends in Northern California who built their beautiful home on 100 acres of redwoods. They have a fabulous organic garden larger than the house, and wanted to put in fruit trees. They choose a cultivar said to attract wildlife.

My friends imagined birds nesting in the tree, opossums, perhaps, eating the plums that fell to the ground. But the wildlife that came for the plums were black bears. So many bears ranged the property to eat those sweet pears that they couldn’t let the dogs out at night. They ended up installing high wire fencing around each of the plum trees.

So when you read optimistic terminology in garden articles, take it with a grain of salt. If something “may require staking,” get the poles in there before you plant. If it is said to be “vigorous,” keep the pruners handy at all times. And when leaves are said to have an “exotic fragrance”, it can mean that the plant smells horrible.