The Allure Of Pokeweed 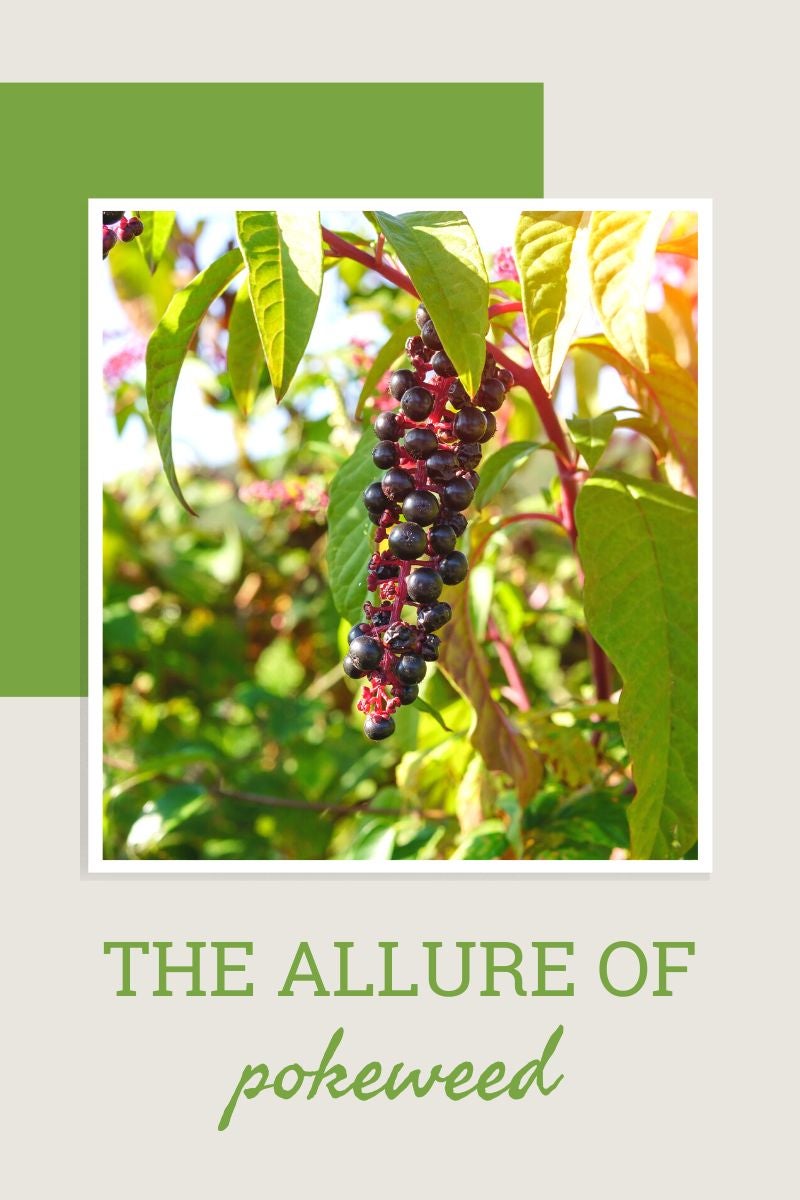 When my neighbor asked about a shrub planted against the boundary fence between our yards, I immediately asked if she wanted me to cut back the branches extending over her fence. But she begged me not to. She was just asking because it grew so well in the sandy soil that she was considering planting the same thing.

I had to laugh because I knew what she didn’t: it is a volunteer called pokeweed (Phytolacca americana). And all parts of the shrubby weed are toxic. But the truth is, I love it just like she does.

The first thing I noticed about the plant was how fast it appeared. A few inches one day, a foot the next, twice that tall by the end of the week. The leaves were bright green and up to a foot (30 cm.) long and half that wide, tapered on both ends.

I cut off a leaf and took it into the San Francisco Botanical Garden to ask the curator what it was. He said he’d get back to me and he did, a few weeks later: pokeweed, aka Phytolacca americana.

“Weeds are just plants you don’t want in your yard,” he told me.

So I decided it wasn’t a weed because, by that time, I really liked the shrub. The stem was deep pink to the point of being red and felt like it was hollow. Over time, the stem grew several wide and taller than I was. More stems appeared, more branches, more leaves. It became a tree in months.

One day my pokeweed started producing pokeweed flowers. The most interesting flower clusters appeared, racemes of deep pink with linear clusters, each purple flower on its own short stem. In time the flowers on the pokeweed racemes developed into grape-like berries, a deep and passionate shade of purple.

And the birds came to call. I always put out bird feeders in the winter, so birds were hardly rare in my San Francisco backyard. But the pokeweed berries proved much more popular. From dawn to dusk, birds of all kinds and sizes arrived and snacked on the berries. Imagine my astonishment to learn that they were poisonous!

I was in the garden doing some writing work on my computer one day and admiring my pokeweed, now towering over our 6 foot (2 m.) fence. Procrastinating, I did a Google search for pokeweed, only to find that all parts of the plant were poisonous, especially the roots and berries. The article offered ideas on how to dig up the roots and destroy the plant.

But I kept “poking” around for pokeweed facts and found the other side of the story. Indigenous people had used pokeweed leaves and roots for food and medicine. The foliage was used to treat rheumatism and arthritis, and, later in folk medicine, to treat skin cancer, mumps, ringworm, scabies, tonsillitis and sore or swollen breasts. The leaves, when young, were eaten as “poke greens.” The berry juice has been used as ink and a dye.

I warned my neighbor about the shrub’s toxicity and again offered to trim back the branches on her side of the fence. And one day I did see her pruning back the berry stalks. But she’s taken by the perennial just like I am. She was just building a pokeberry bouquet to decorate her home.