Angel’s Trumpet with Devilish Side Effects 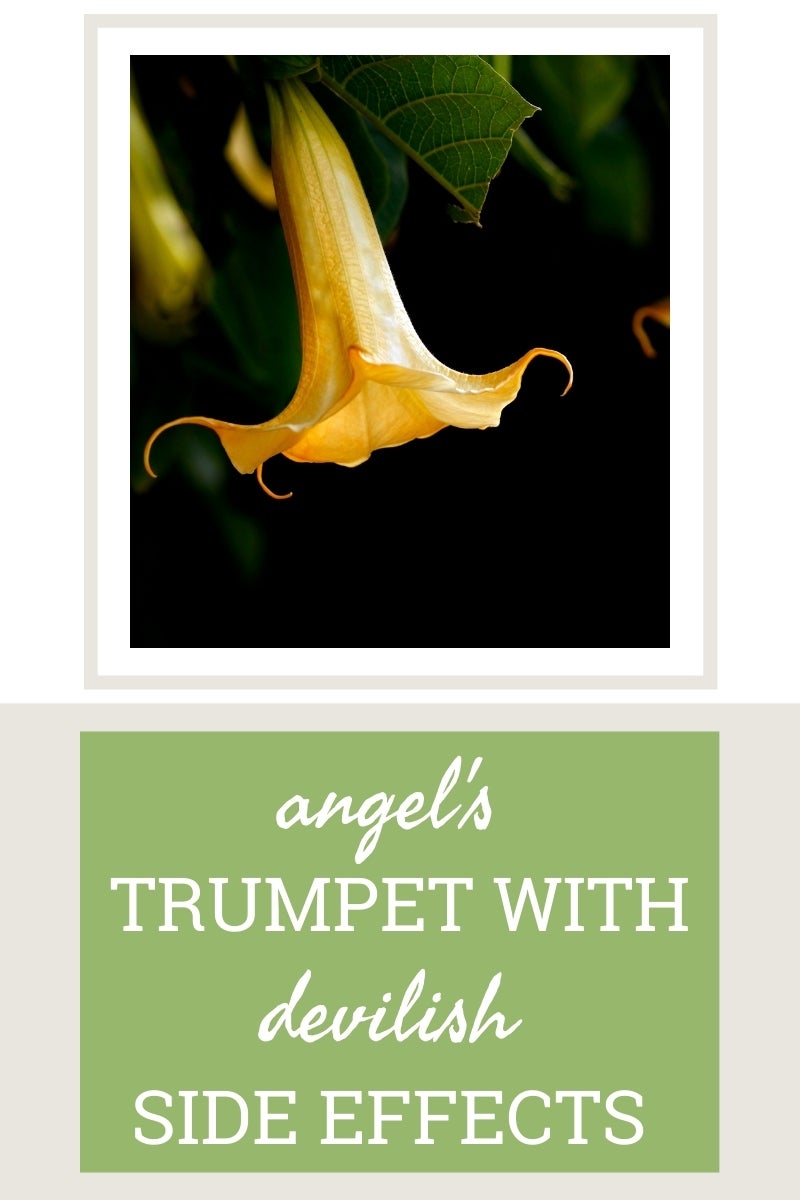 I always wish I could grow tropical flowers. The blooms from warm regions seem to have much more cache than the standard varieties I can grow in a northern climate. I have tried to grow and overwinter some exotic species with little to no luck. If I could be a flower it would be Brugmansia, and that is probably because I truly wish I had the plant. Plus, it has 2 sides to it, a literal floral duel of good and evil. That’s a script that sounds exciting.

A plant that is both angelic and wicked is the Brugmansia Angel’s Trumpet. Datura plants also have trumpet shaped blooms and carry the same moniker, but are weedier and smaller. However, both also possess deadly properties. Brugmansia produces huge, drooping, pendulous flowers, while Datura blooms are more upright. Brugmansia is less hardy than wild Datura plants, which is why I can’t grow them in my USDA zone 6b. I also shouldn’t grow them because I have very inquisitive kittens.

Imagine a plant that’s a small tree, up to 30 feet (9 m.) in height. They literally will grow several feet per season resulting in a towering mass of stems, leaves, and trumpet shaped flowers. The plant is a woody perennial that needs heavy feeding and plenty of water. That sounds just like me! The heavy flowers may grow up to 24 inches (61 cm.) long, and come in hues of pink, orange, white, yellow, peach, and red. Angel’s Trumpet flowers also emit a powerful fragrance which is more pronounced on warm evenings. Some say the scent is literally intoxicating, leading to headaches and fainting episodes.

The Dangers of Angel’s Trumpet Flowers

The thing about these tropical flowers is not only their beauty but their deadliness. Some history claims that the wives of Egyptian pharaohs were fed Brugmansia and then buried alive with their dead husbands. Still other lore claims the name Angel’s Trumpet is due to the sound you would hear if you ingested any part of the plant. The plant can definitely kill you, but in modern cases most patients recover. The worst part might be the intense hallucinations that make you you’re your grip on reality. Still, it is best not to grow the flowers where pets or children play.

Brugmansia is an amazing tropical plant with astounding flowers. It needs full sun (so do I if I can get it), and doesn’t seem to mind being pruned. However, the intense scent and the possibility of getting sap on your skin means pruning must be done with extreme caution. I like Angel Trumpet’s flowers’ dual personality. On the one hand, they are lovely and beautifully scented. On the other hand they can kill you without effort. Each trait is one I respect and admire.