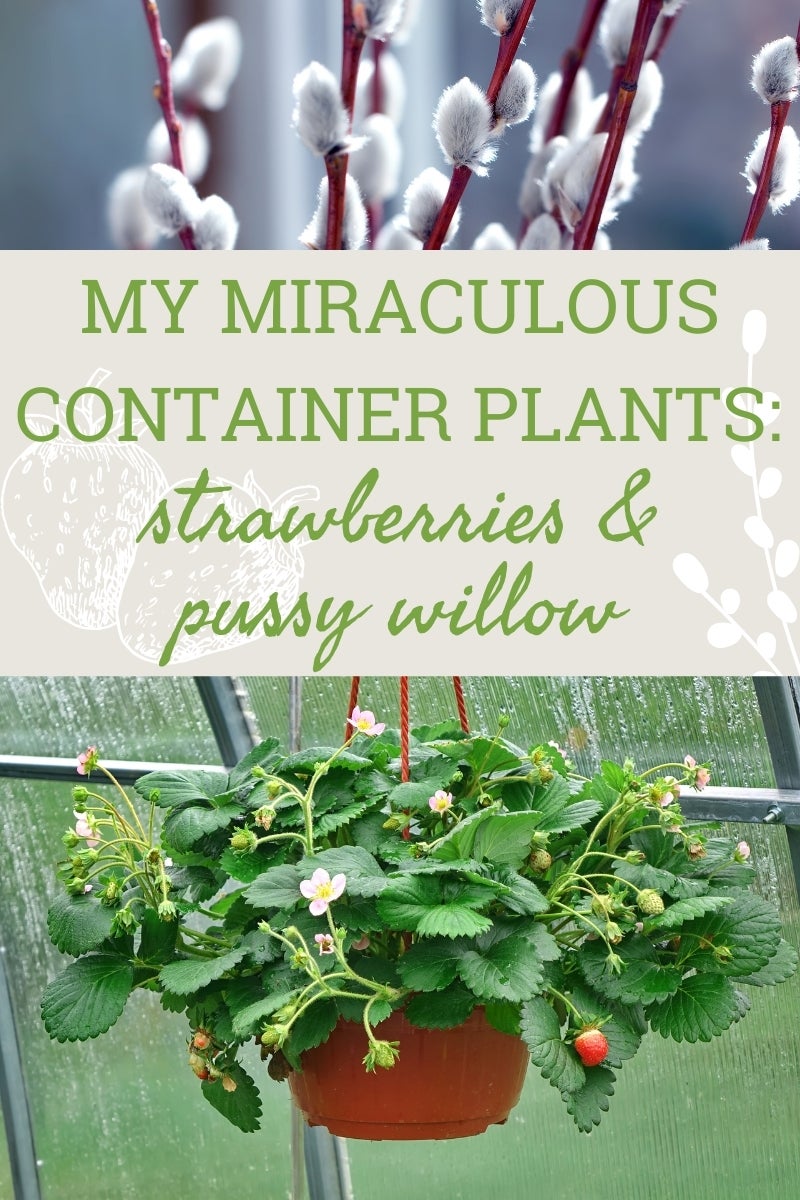 Strawberry and pussy willow“¦ two plants I would never have imagined keeping in pots, but they’ve been thriving in their contained environments for years now.

I used to grow my strawberries in a cinderblock tower I constructed. They were fabulous. And then I moved unexpectedly, fleeing an abusive marriage. Leaving my garden was probably more difficult than the torment that followed for months afterward. But I got through it and succeeded in growing another garden somewhere new, albeit much smaller and in containers that could travel with me this time (if needed). One of these included a lone strawberry plant that I managed to grab from my abandoned cache nearly a year later. It was mine after all. I had put so much work into that bed – into all of them. I wanted strawberries that were just like grandpa’s, and they were. That’s why I went back for some plants. The place was empty then, the garden beds long overgrown and sad looking.

I dug up at least one of every plant I was able – from iris to hosta and everything in between. The strawberry, though, had fond memories attached. I stuck my strawberry plant in a hanging basket just until I could once again start another bed in a place of my own. Turns out the container grown strawberry thrived in its pot, putting out daughter plants to the point that I found myself pruning the runners a lot. Years later, it’s still in a hanging basket and many of those cuttings are growing in another strawberry patch out back, now that I’m in a place where it’s possible. But I will always keep the mama plant hanging right where she is as a reminder of where I’ve been and how far I’ve come. And, yes, those ripe strawberries are just as tasty as grandpa’s.

Much later and in my current home with plenty of yard space, my mom gifted me a pussy willow in a container. It was just a little plant then (looked more like a stick in a pot) and I had every intention on transplanting that pussy willow somewhere in the garden. But life happened. I got busy, with the kids and with work. The potted pussy willow sat in the spot where I aimed to plant it for months, and then years. You may think this turned out bad, maybe even curious if growing pussy willow in pots is possible. Well, I’m happy to say that it can be achieved, even if it wasn’t on purpose.

My “stick” has grown magnificently, now transformed into a lovely little shrub, and I look forward to the soft pussy willow catkins every spring. It’s done so well, in fact, that I decided to keep it in the container, just giving it a root pruning now and again as needed. As they say, “If it ain’t broke, don’t fix it.”

I never intentionally set out to grow either of these plants in containers. It just happened. I grow a number of potted plants, many in some unlikely items, but the strawberry and pussy willow plants are the two that I was surprised by most. Sometimes success comes unexpectedly.

Tell us what you think: Leave a comment
5 people are already talking about this.
Printer Friendly Version
Read more about Backyard Stories
<PreviousNext>
Did you find this helpful? Share it with your friends!
FacebookTweetPinEmail