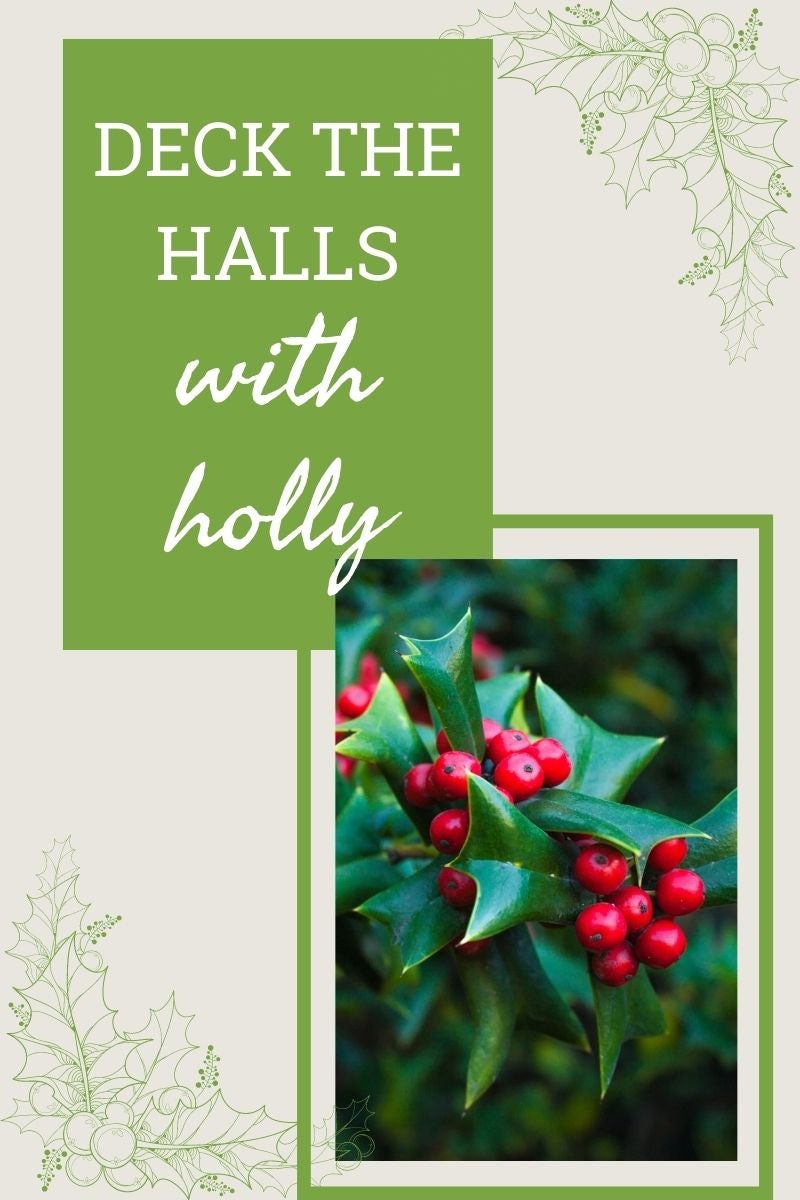 It sounds almost trite to name the holly tree as the plant I associate with the holidays. Surely everyone and their brother knows the carol about decking the halls with holly boughs, so it doesn’t sound like a unique choice.

However, my holly story goes way beyond fa-la-la-la-la, la-la la la. I love the wild holly trees in France because they have nothing to do with humans or human traditions. They decorate themselves for Christmas, provide winter food for wild birds, and protect their neighborhood from bad energy.

The first time I saw a wild holly tree was in France. I was hiking up the mountain behind my little house in winter and there it was, standing along on a rocky hillside. I loved its dark green spikey leaves and bright red holly berries. It didn’t wait to be decorated by humans for Christmas; it brought the joyous spirit to the mountainside from November through February.

I had seen cut boughs of holly in San Francisco in December. But this live tree in the wild was not an owned ornament. It seemed to have strength and wisdom in and of itself, the same qualities I associated with the mighty native oaks in France.

It wasn’t until much later that I learned that the holly and the oak are considered twins in Celtic mythology. The oak rules in the sunlit seasons of the year, while its evergreen twin, the holly, reigns during the dark, winter months.

In Basque Country, holly is said to be the best wood for making makhilas, the staffs those crossing the mountains use for hiking and protection. That means that holly trees are occasionally cut down, although this is said to bring extremely bad karma.

Once my young daughter came running back to the house in tears, having discovered one of the wild hollies up the mountain had been cut down. I went out with her to look and to mourn. The dark, beautiful trunk was what the cutter had wanted, and the branches, full of the spined leaves and red holly berries had been left behind on the ground.

We gathered them up and carried them home, determined to make use of them. We ultimately made four Christmas holly wreaths out of the branches. Rather than decorate our door, we tied the holly wreaths into trees around the property. Every day, we delighted to see the blackbirds coming to eat the holly berries.

But the birds didn’t get all of the berries. At least a few holly berries must have fallen from each holly wreath or else it was a bit of Christmas magic. Because the next spring, we spotted tiny holly trees growing near each of the trees in which we had put the wreaths.

Of these trees, five have grown into trees now taller than their parent. Three are females, bearing berries, and the other two are males, essential to the berry-making. Somehow, that story represents to me all the best of the Christmas spirit of joy and loss and renewal.