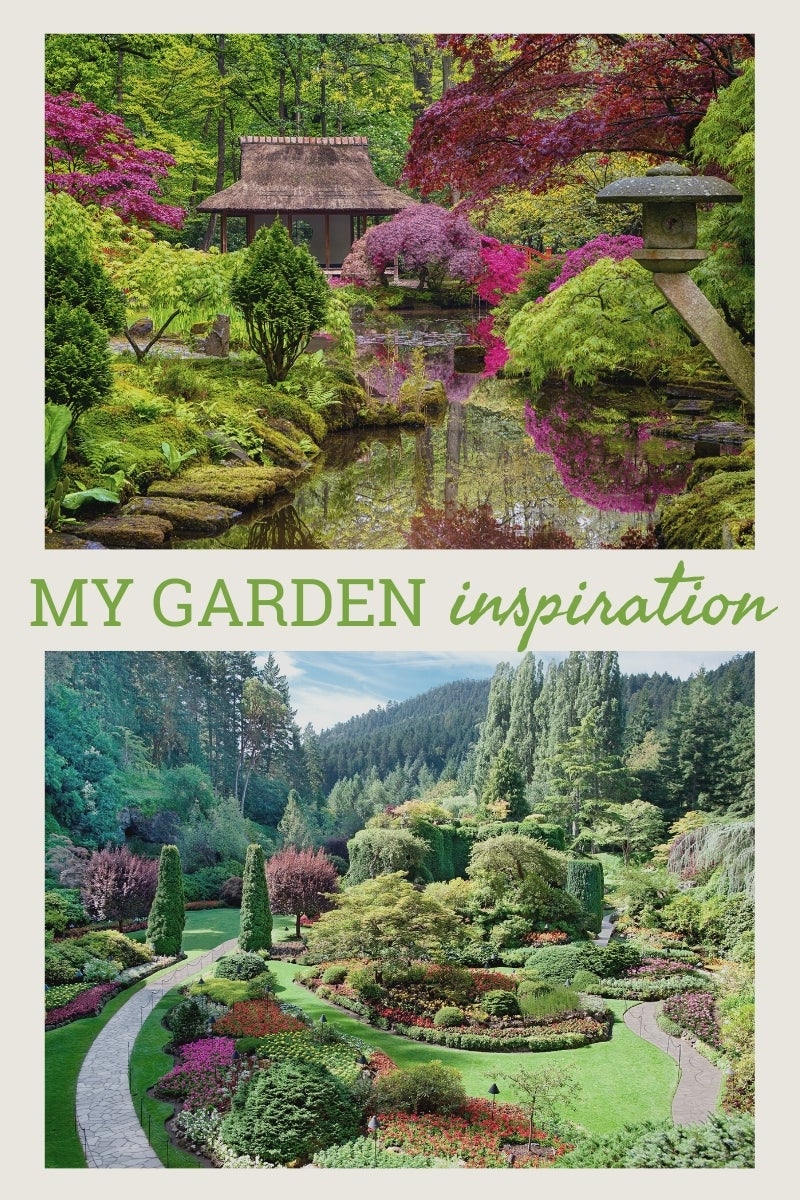 My previous home’s landscape was filled with mossy, patchy grass, and no garden beds. I wanted to do something unique with the garden design. My inspiration came from trips to see professional gardens in Spokane, WA. and British Columbia in Canada. I had seen both these gardens as a child and then more recently as an adult. The first had an elegant Japanese garden, while the latter was English classic. I had my plan.

Many gardeners create a holistic appearance in their front yards. Plants must set off the home and blend beautifully for either a peaceful effect or an impactful statement. I couldn’t decide where to go with my landscape, so I melded together two classic design plans. I was inspired by the Nishinomiya Tsutakawa Japanese garden and the Butchart gardens.

The Japanese garden was developed by Nagao Sakurai, a well known Japanese garden architect. It was started in 1967 and completed in 1974 and was meant to cement a friendship between Spokane and its sister city, Nishinomiya in Japan. There are maples of all sorts, flowering azaleas, beautiful dogwood trees, and many other Asian garden touches. It also features a large koi pond with a lovely bridge as well as carefully placed stones and rocks as inorganic features. In spring it is awash with flowers, while the trees blaze in fall. It is truly a harmonious garden that honors the timeless traditions of the Asian garden.

An English Garden… Of Sorts

In Canada, Butchart Gardens was born on an old quarry. Today it boasts a rose garden, Italian garden, Japanese garden, and more. It’s the spring flower displays that really wow though. There are over 900 bedding plants as well as groundcovers and bushes that transform the gardens into a sea of flowery glory. While not a traditional English garden, it has many elements that reflect the style. These include paths and vertical structures such as arbors. The sheer number of plants is key to creating the abundant verdant feel of the spaces, as is the layering of the planting.

For my garden, I divided the front yard in half. One side boasted large stones, a pagoda statue, clumping bamboo, a maple in an Asian glazed container, and more Asian garden elements. The other half got a cute little picket fence around it decorated with an evergreen clematis. Inside were perennials, annuals, boxwood, and even herbs such as sage and rosemary. When in bloom it was a seamless mass of color, movement, and lush planting. The two sides were divided by a cobblestone path.

While not a traditional garden in that it was comprised of two different styles, the effect was very pleasing. One side was more austere, I guess, while the other side was a bit wild. However, I had many seasons of interest and each garden mimicked the traits I admired from English garden design and the Japanese style. It was truly a labor of love and one I enjoyed greatly.