My Exhaustive Fight With Chickweed Plants 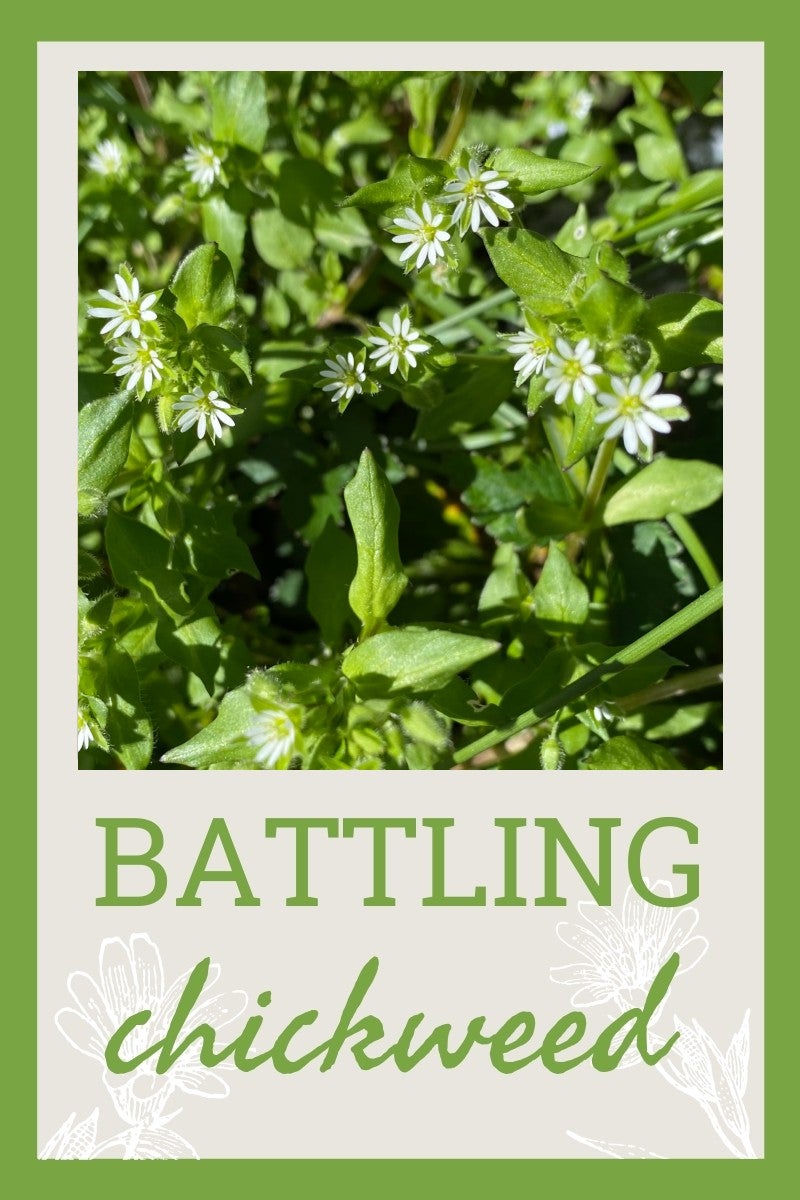 Image by Nikki Tilley via Gardening Know How

Weeds are inevitable. As a gardener, I know and accept this. But some of them can truly test your patience. Chickweed (Stellaria media), for example, is the bane of my existence.

Yes, chickweed plants are edible (In fact, they’re said to be highly nutritious and a great substitute for spinach.), but they multiply at such a high rate that I simply cannot keep up. The plant takes over in no time. While it’s not too difficult pulling chickweed up, it’s time consuming and backbreaking work. And if you’re not careful, you’ll miss some and before you know it, the area is covered again. Blink and the garden is engulfed. Omg, is there no end?!

Battling Chickweed in the Garden

It all started when I was redoing one of my garden beds in early spring. I had been fighting briers that I can only assume hitched a ride in the wildflowers I’d gotten from the edge of our wooded lot. That was a lesson well learned (and another story for a later time)! Anyway, after taking everything out and literally starting from scratch again, I replanted my flowers and other plants, mulched the area, and expected to see a flourishing garden once again as the season progressed. But, alas, this was not to be. Yes, the plants grew nicely and the flowers bloomed, but I was astonished to find the bed was now home to what appeared to be small weeds of some kind – and they grew up fast.

I plucked them out, which seemed easy enough, but when I would go back out there in what was only a matter of days, there would be more. The culprit turned out to be chickweed in the garden. And so began my battle with this persistent invader.

Here’s the thing, chickweed plants enjoy sun to partial shade. This garden bed receives lots of sun until the foliage of my cherry-plum tree fully leafs out. Then the area gets a little shade. Unfortunately, the chickweed likes these conditions. Okay then, what about more mulch? After all, mulch reduces the growth of this and other pesky weeds. Yea, right! Even this has not slowed the plant down. Its shallow roots simply take hold on top of the mulch. It also apparently loves moist soil. Okay, I’ll just try to keep the soil somewhat on the dry side and maybe it won’t be so prolific. No such luck. The weedy plant is laughing at me by this point as I continue bending and squatting, pulling and tossing. My back and knees aren’t laughing though. The more I pull it up, the more it comes back, better and stronger than ever before. What is a girl to do?

Being a winter annual weed, chickweed begins popping up in my area around the end of winter and seems to grow vigorously in early spring. And while it should die back in late spring or early summer as the temps start to rise, that isn’t always the case. I’ve found myself plucking the plant well into summer, after its grown into maturity. It it pulls up easily enough, but there’s a downside to this. The seeds, which can still germinate after being in the soil for up to 10 years. This continual self-seeder simply “replants” itself long after painstakingly removing it. And each plant houses anywhere from 800 to thousands of seeds. It’s no wonder why managing chickweed can be so maddening. Oh, and beware where you toss it out. I’ve just been filling my weed bucket and emptying it in a designated area at the edge of the woods. Oopsy daisy! It’s only managed to take hold there and has now found its way into my wildlife garden. Where’s those chickens when you need them, or maybe a goat?

After battling chickweed the past few years, I’ve ultimately given up and given in. When I think about it, the tiny white flowers and mat-forming foliage that sprawl along the ground can be quite attractive amongst the other plantings, which still seem to thrive. It even helps keep other weeds out, acting as its own type of living mulch in the garden. Since the plant is deemed good for you, I guess I’ll give it a try and at least make its presence here useful. I’m sure it will eventually grow on me – lord knows it grows everywhere else.

Tell us what you think: Leave a comment
6 people are already talking about this.
Printer Friendly Version
Read more about Backyard Stories
<PreviousNext>
Did you find this helpful? Share it with your friends!
FacebookTweetPinEmail

Image by Nikki Tilley via Gardening Know How