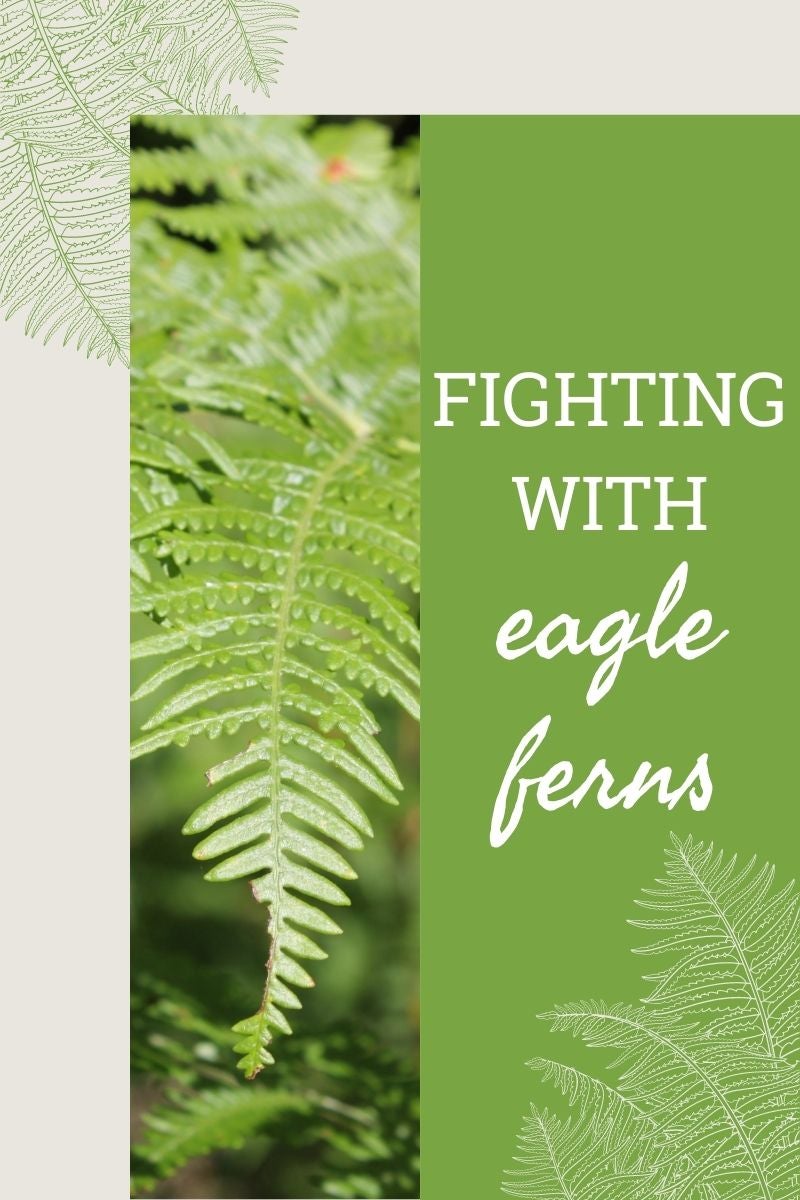 Imagine a hillside so steep that an escaped orange can end up almost a mile away if it doesn’t run into any obstacles. That is what my yard looks like in France, where my little stone house is situated halfway up a mountain slope.

Now the house itself is built on a flattened pad, but above and below, it’s steep. Needless to say, this makes for fabulous views all the way to the Atlantic, but it does not lend itself to putting in a neat, normal lawn. Or even a meadow.

Introduction to the Eagle Fern

I bought my little house in winter and at that moment in time, the slopes below it were bare. Only a few trees were present on the 10 acres; thick, tough oak trees growing at the edges of the property. But most of the land had no shrubs or grasses.

When I returned in spring, I saw a different story: new green shoots poking up everywhere. The story continued and evolved, however, as the shoots uncurled themselves into eagle ferns (Pteridium aquilinum), a type of fern sometimes called bracken, common to temperate regions.

Invasion of the Eagle Ferns

The eagle ferns delighted me with their bright, fresh color and wide mature fronds. The fronds are roughly triangular and resemble eagle wings. The first year I found them lovely. Little did I know how well I would come to know them.

The eagle ferns grew very happily on the slopes all summer long, to die back in fall. I learned later that they thrive in sunny areas in pastures and steep hillsides.

The ferns are incredibly adaptable, readily and aggressively colonizing disturbed areas. In my case, the ferns soon were so high that when the wild ponies living on the mountain would visit my land, they could walk around completely hidden. I would only see the movement of the fern fronds above their heads.

The ferns quickly covered and shaded out not just the flowers I had planted, but the larger shrubs as well. My neighbors told me that repeated cutting could work if I did it regularly for several years. They also told me the ferns wouldn’t grow in shade. So I went to war with the ferns. As it turned out, it was an extended battle.

I bought a weed whacker and cleared the slopes nearest to my house. It would take a few weeks for me to do this if I weed-whacked steadily in the mornings. I did this in July, then again in September. In addition, I started planting trees across the property. With these two strategies, I managed to get the ferns in control on the acres around the house. I also sprinkled native grass and flower seeds around the property and watched a meadow emerge.

While trees and meadows are not a nice, neat lawn, they work for me. The diversity attracts wildlife and doesn’t require much work. Every year I try to take out more ferns and expand the meadow. Am I done yet? No, I cannot claim victory. I will be busy at this for years to come.