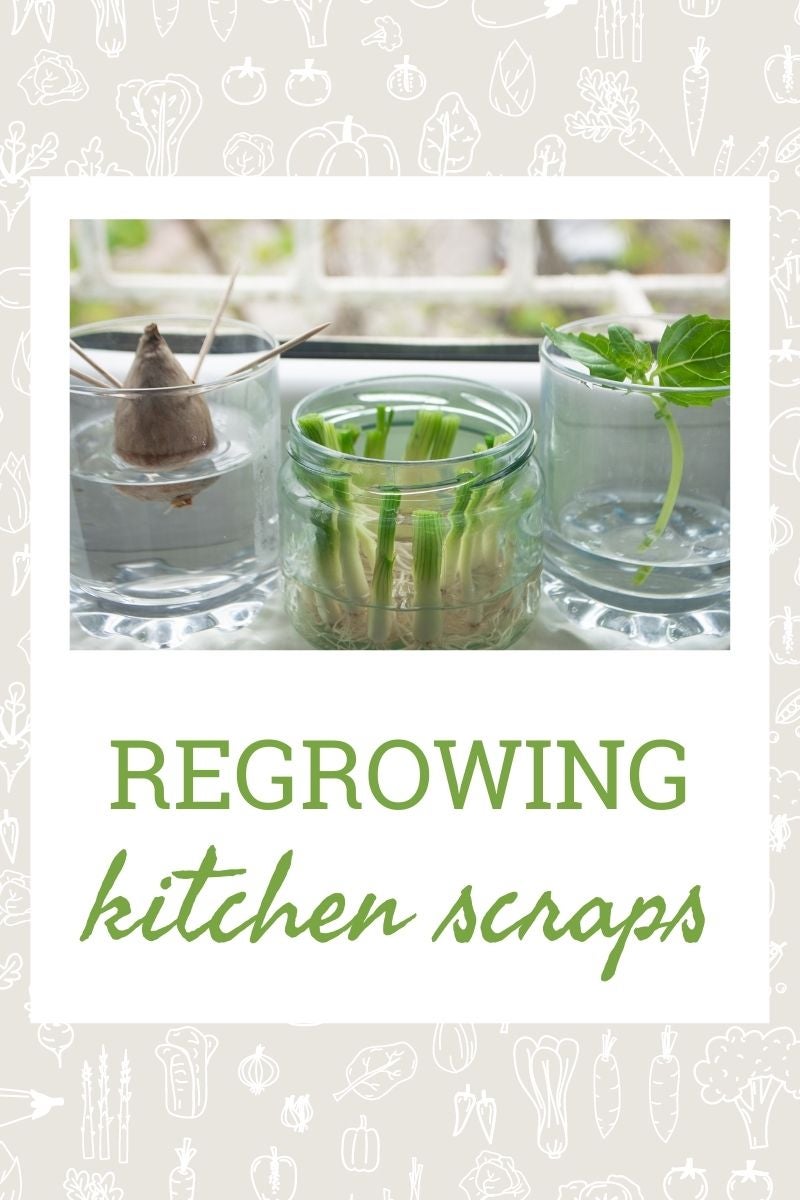 We live in the boonies. I mean really far from civilization. We take an hour and a half trip once per month to get our groceries and non-food items. That is it, especially with gasoline on the rise. So anything I need to cook with has to be purchased then or already processed. But some things need to be fresh, so I grow them from leftovers.

It had never really occurred to me until I saw a video, but you can re-grow veggies using the trimmings. I saw a video quite by accident, which recounted all the things you can grow from trimmings. You know, things like the top of a carrot or the bottoms of green onions. It was quite astounding and fit nicely into my problem of having fresh produce by the end of the month.

I compost religiously in a tumbler or bury kitchen scraps in my dirt farm. But once I learned you can re-grow veggies in some cases, I was hooked. So I keep little dishes of shallow water to start my veggies. Once they take off, I put them in soil under a plant light to continue to grow. Growing kitchen scraps is the most satisfying thing. I can have green onions at any time of the month, long after they would have gone bad.

It’s not just kitchen scraps I have in the home interior in winter. I also have a Meyer lemon, a dwarf pomegranate, assorted herbs, and currently I am growing potatoes. I just used a car litter bucket with holes drilled into the bottom, and under that another litter bucket to catch water run-off.  When I harvested the outdoor potatoes, a few had already begun to sprout, so these are growing nicely. Soon I will add another layer of dirt to “hill” them. This is another way to re-grow veggies that would otherwise have been compost.

How to Regrow Veggies

Currently I have the green onions sprouting, a bottom of a Savoy cabbage, basil starts in water beginning to root, and a celery base. It is so easy to grow from trimmings with these sorts of veggies. Started in water, they quickly produce roots and leaves. Some of the things I grow from trimmings came from the supermarket, while others are from my harvest. I am also in the process of starting some seeds which I will be grown in my indoor greenhouse.

Other things which will probably not produce, I grow for fun. These include an avocado pit and the top of a pineapple. They produce plants but generally not fruit, which is ok. I just love to have plenty of greenery in my home and enjoy the process, whether they give me food or not.

By growing from kitchen scraps, I feel like I am doing something good for the earth. I also enjoy being able to generate fresh food that will tide me over until the next shopping trip. Plus, it is just a fun project and so easy it would be foolish of me not to give it a go.