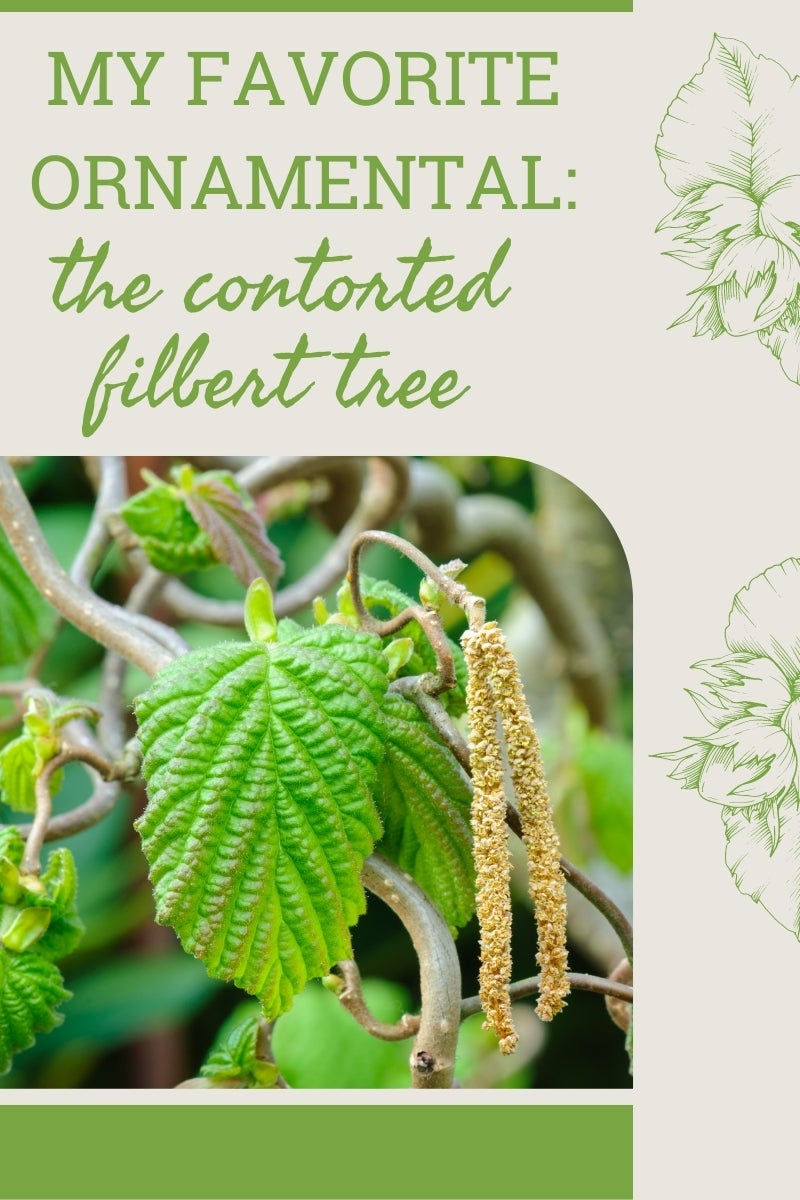 I like dual purpose plants: those that provide beauty but also some food for my table. One of my all time favorites is a contorted filbert. It is also known as Harry Lauder’s Walking Stick, and mine is the bronze variety “Red Majestic.” The stems are what really attracted me: twisting, cavorting twigs and limbs that have a very Dr. Seuss quality. With such natural art, the garden looks quite whimsical, even in winter.

Developing an edible garden is important to me, but I also love ornamental plants. So this influence leads me to interesting, uniquely formed food plants. I love filberts and wanted a nut tree, but not something too huge. Hazelnut trees are perfect. They are actually large bushes to small trees and they thrive with very little care.

For some added drama, I selected the Harry Lauder’s Walking Stick. Not only did it eventually produce nuts, but the crinkly reddish leaves are attractive until late fall. After leaf drop, you are still left with the curly stemmed skeleton, an oddity, but a wonderful one. As an added bonus, the plant produces golden catkins, dangling deliciously from the stems. It has 4 full seasons of interest and then after a few years it develops hot pink nuts. Glorious!

The Harry in the name came from an early 20th century entertainer named Sir Harry Lauder. He was a beloved Scottish singer and dancer whose constant companion was a gnarled and twisted walking stick. It was almost as famous as he was and was part of his traditional Scottish garb. Hazelnut trees are native to North America. They grow wild in the woods and forest edges and are a common sight. They are in the birch family of flowering, deciduous shrubs and trees. Interestingly, hazelnuts are the plant’s fruit while filberts are the commercially recognized name for the nut.

My tree grew to about 6 feet ( 1.8 m.) in height and almost as wide. It doesn’t ask anything special of me. All it wants is nice juicy soil and plenty of water. I haven’t had any insect or disease issues, although apparently filbert blight can be a worry. They are very hardy trees with tolerances down to zone 3 and up to 9. Most come off a rootstock, so you have to watch carefully for suckers which may not be of the contorted variety. The plant grows rapidly, reaching maturity in just a few years. Mulching around the tree helps keep soil cool and moist.

Hazelnuts are funny. They are monoecious, which means they have male and female flowers. However, the males come months before the females. Fertilization is usually in winter. But, hazelnut trees can’t fertilize themselves. They need pollen from another filbert tree. This is where wind born pollen is the savior. As long as the plant isn’t too far from another hazelnut, it will have success producing nuts.

I love my Harry Lauder’s Walking Stick all the more for its quirky form and name. Its uncomplaining nature is a bonus, as well. But best of all is watching the brightly colored nuts form, and snacking on them at the end of the season.