Crushing Japanese Beetle Populations: My Fight Against These Invasive Beetles 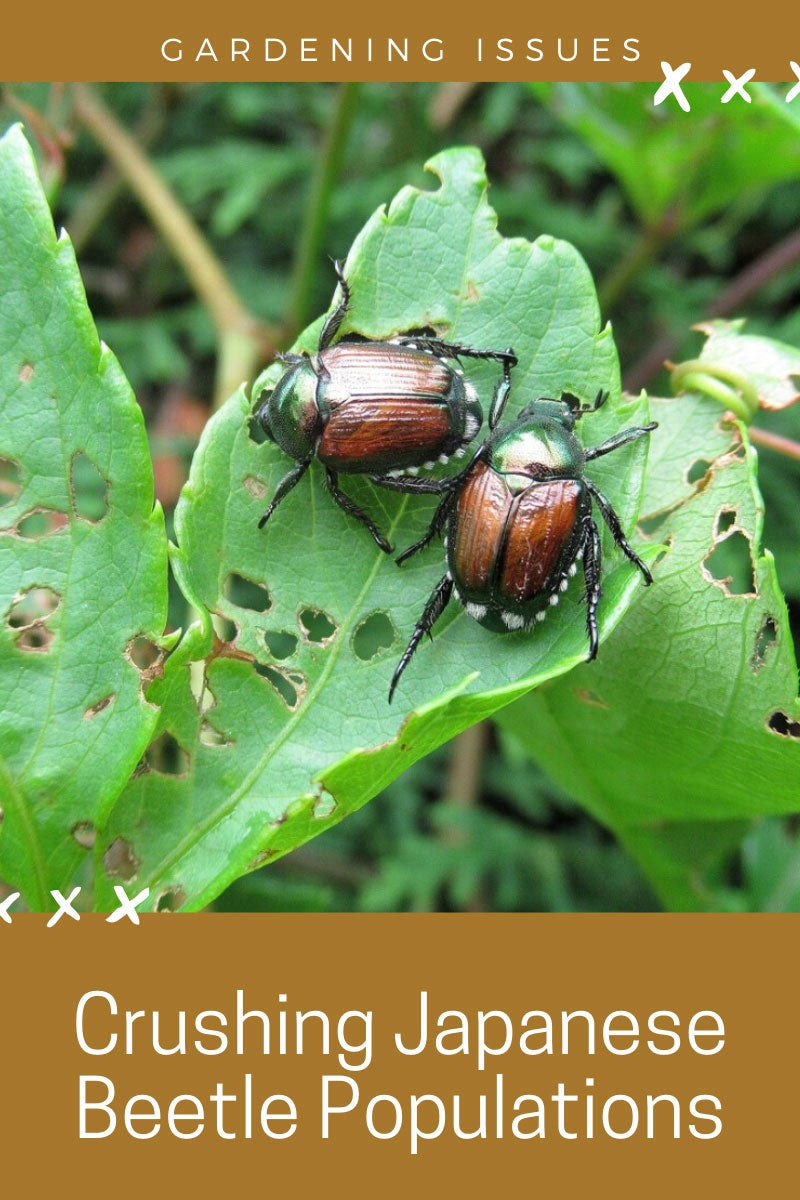 I prefer to maintain a healthy, natural ecosystem in my garden. I don’t like to use pesticides and prefer less damaging methods to protect my plants, like encouraging predator insects and using traps. So, for me, a non-native pest, like invasive beetles, is a real problem. The Japanese beetle has been invading southeast Michigan gardens and damaging turf and other plants. My battle against them has been protracted and frustrating.

These small beetles are actually pretty attractive with a metallic, deep green exoskeleton. But if they are in your yard or garden, it becomes obvious quickly that they should not be made welcome. The beetles in Michigan have been a big issue for golf courses because their grubs feed on grass roots in spring.

During my worst infestation, I ended up with dry, damaged patches of grass later in the summer. The damage to the roots makes the turf especially susceptible to drought. One especially bad season the grubs attracted their own predators, namely crows, who really churned up the lawn looking for the juicy treats.

The adult beetles also nibble on all kinds of plants, from the leaves of fruit trees and shrubs to nearly everything in the vegetable patch. One year they did serious damage to my favorite rose of Sharon, sketonizing the plant.

How I’ve Kept Japanese Beetle Populations Down in My Yard

To manage Japanese beetles, pesticides weren’t really an option. I don’t want to harm native species. So I have used a combination of other strategies to get them under control. First, I tried traps, which are easy to find at nurseries, but they didn’t seem to help. A little online research told me I was actually attracting beetles from other areas, potentially making my problem worse.

I also tried boosting populations of the beetle’s predators, including tachinid fly, wasps, and nematodes. I planted flowers that the flies and wasps feed on, including meadowsweet and Queen Anne’s lace. I used an application of beneficial nematodes designed for killing grubs in turf.

I have also spent many mornings hand picking beetles from some of my beloved plants. It is oddly satisfying to pick them off and drop them into soapy water, but this is, of course, time consuming.

Improving the native ecosystem by planting native flowers and promoting predators has helped over the years. It was not a quick fix, but it has improved the situation. I will admit that when the beetles went for my beloved rose of Sharon, I did resort to pesticides. I’m not proud of it, but the problem was overwhelming.

I still have some beetles around, but the problem is much less than it used to be.