The One Hundred Dollar Potato 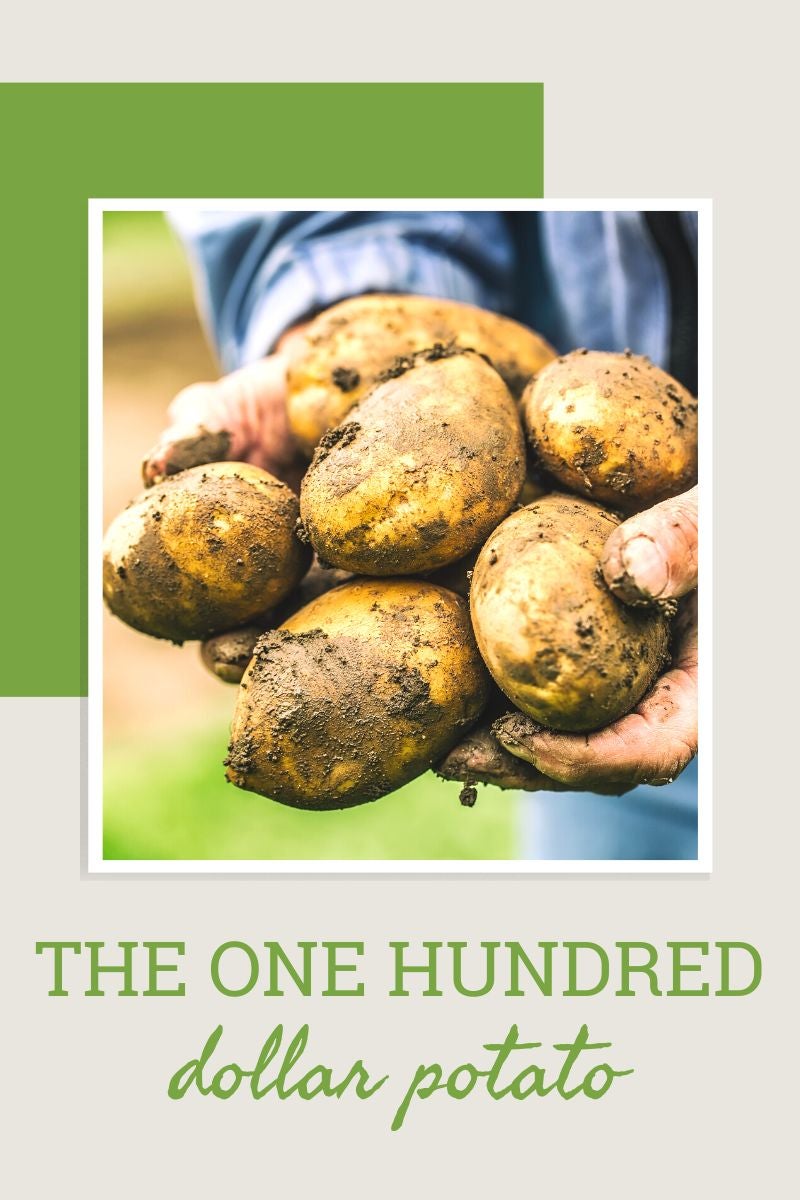 Does growing a garden really save money? If you’ve read the amusing book The $64 Tomato by William Alexander, you may not think so. In his anecdotal tale, Alexander tallies up the cost of his garden only to find his prized Brandywine tomatoes actually cost him $64 each to grow. Is vegetable gardening really this costly?

Is it Really Cheaper to Grow Your Own Vegetables?

I have to admit, I’ve never had the inclination to estimate the cost of each of the veggies I grow. I don’t track the amount of produce I harvest, nor do I tally up the amount I spend to grow a garden each year. I don’t have to.

Most years, I knew the value of the produce I harvested was much more than my average $100 investment in seeds and plants. Yet, one year I grew a potato that beat Alexander’s $64 dollar tomatoes. That’s when I began to ask, “is growing a kitchen garden worth it?”

I lovingly refer to that growing season as “the year the deer ate my garden.” With my youngest away at college, I remember being quite excited to start my “empty nest” growing season with a new vegetable garden vision. Instead of focusing mostly on tomatoes and peppers, my plan was to cultivate as many different kinds of veggies as possible.

I began the season indoors by sowing a variety of cruciferous vegetable seeds, including broccoli, Brussels sprouts, cabbage, cauliflower, and two kinds of kale. When the weather outdoors was suitable, I transplanted my babies into the garden. All went well for the first several weeks.

Then one day, I noticed a newborn fawn laying in my neighbor’s field. Soon after that, the tops of my transplanted cruciferous veggies began to disappear. I’m not sure if it was the fawn or the doe who likely wanted to forage within sight of her baby, but the first damage occurred on the plants nearest the field.

I shrugged it off as we had never had any lasting damage to the garden from nibbling deer. The injured plants began to recover, and I thought I was safe. After all, I usually grew some form of cruciferous vegetable each year and the deer had always left them alone.

Oh, how wrong I was. The deer visited again and again. The more seeds and transplants I put in the garden, the more the deer ate. What they didn’t eat, they trampled. By the end of the season, I had only been able to harvest one lonely potato. That certainly wasn’t much of a return on my $100 investment.

When is Gardening Worth it Financially?

From that year on, we’ve had a deer problem in the veggie patch. I’ve had to invest in fencing, t-posts, deer netting, and hoop tunnels to protect my crops from Bambi and her hungry offspring. Taking these extra expenses into account, my costs to grow a garden have risen considerably.

Do I still find gardening to be a cost-efficient method of procuring food? Definitely! But then again, after eating flavorless store-bought tomatoes all winter long, who wouldn’t spend $64 for a real, garden-fresh, homegrown tomato?