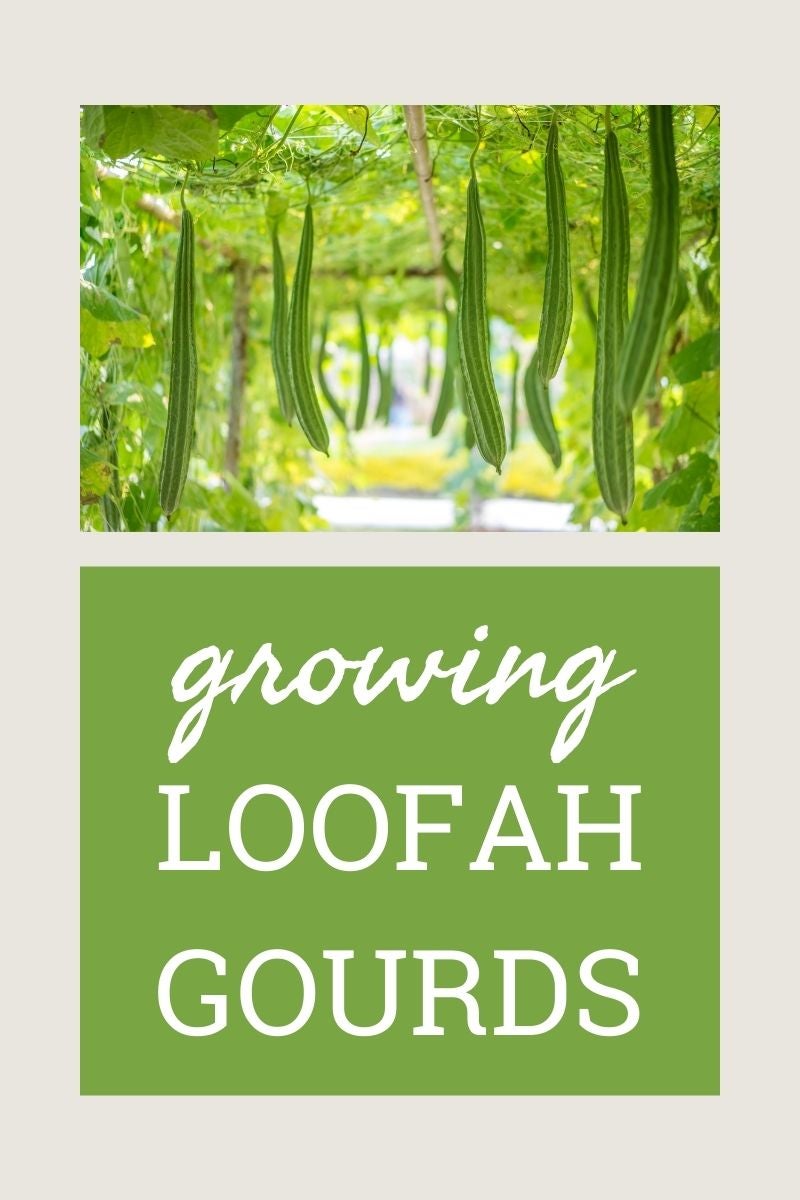 You can’t go into a body shop (not the car kind), without finding various loofah sponge offerings. I had often wondered what produced loofah. For decades I actually thought it was an ocean creature that had been dried. Imagine my surprise to find it came from a gourd.  The loofah gourd is in the genus Luffa, and is native to the Old World tropical region. You can eat young fruits, but it is also a common body scrubber.

I love having a loofah sponge in the bath. Nothing exfoliates as quickly and completely. The gourds hail from tropical to subtropical regions and need a long growing season to produce fruit. But gardeners in lower zones can successfully raise the plants. In cool regions, start growing loofah seeds indoors 6 to 8 weeks before your last expected frost. It is helpful to have a bright window or plant light to keep plants from getting to gangly.

The year we grew the gourds, we did have to start them inside. The vines need 150 days at the minimum to produce sizeable gourds. Our growing season was long that year, luckily. To speed up germination, which is notoriously slow, we scrubbed the seeds with sandpaper and soaked them. Once hardened off, our seedlings grew like weeds. The care of loofah gourd is similar to other gourds, squash, and cucumbers.

Well draining soil of average fertility is also necessary for growing loofah. We amended ours with leaf litter and that seemed to do the trick. The vines are vigorous and require a sturdy structure to grow over. We just used some scrap wood and cobbled together a trellis of sorts. Some gardeners recommend removing all the first flowers, but we didn’t do that. We let the first fruits remain on the vine to ripen for scrubbers, and harvested a few subsequent young gourds to taste.

The flavor of loofah gourds is not very impactful. It is traditionally used in Indian and other national dishes. Because of its low flavor, it compliments spicy foods very well. Consider it a squash and toss it in your curry. If you want to harvest the gourds for sponges, let them stay on the vine until they discolor and turn dark. Leave them until just before the first frost. Then soak the gourd in water for a few hours. The brittle skin will be easier to peel off. Once the rind is removed, shake out the seeds and soak the sponge in a solution of bleach. You are now ready to use it in your shower.

We gave a bunch of these away at the holidays in cute gift baskets with other toiletries. They were quite easy to grow and peel. I’m not a fan of the fruits being used in food. They are nondescript in taste and required so much spicing to get any flavor in the fruit. But, it was a fun experiment and one I would happily repeat.