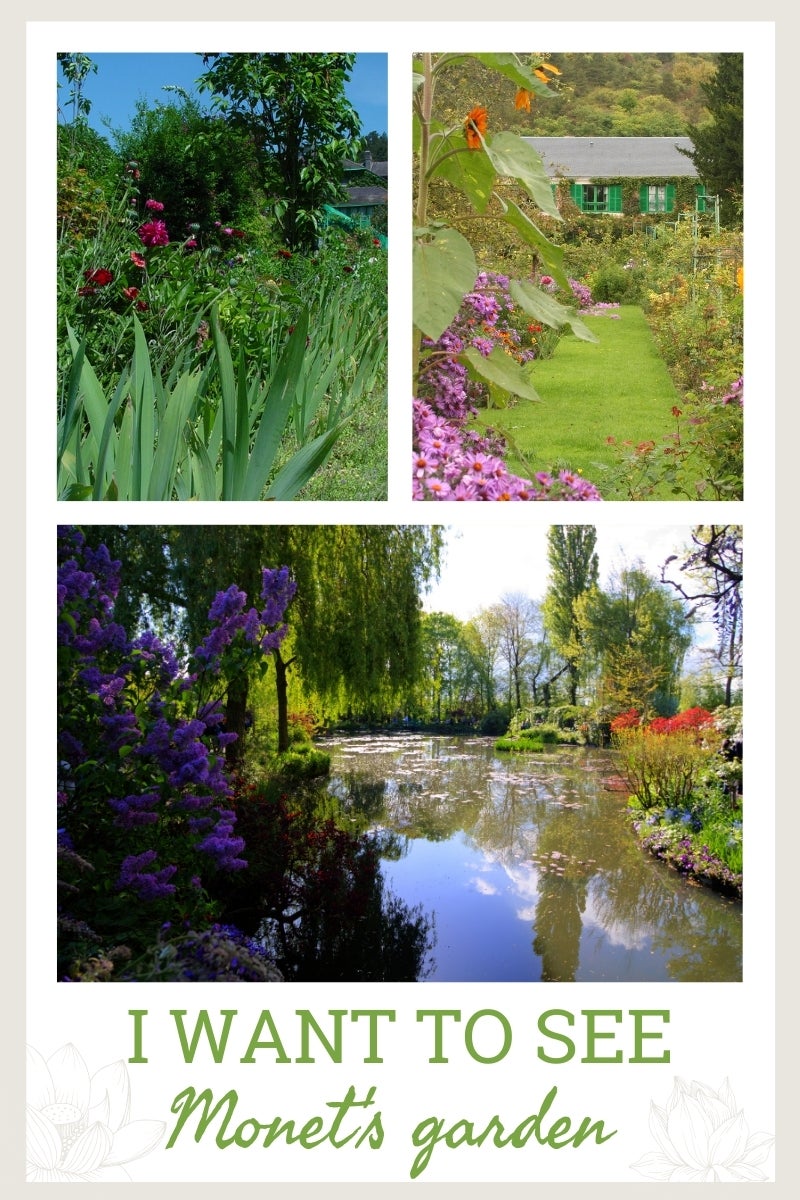 I’m not a traveler. I enjoy occasional road trips, but mostly I’m happy to stay close to home. Although I love looking at various gardens online, I have no burning desire to visit them, with one exception. I would love to see Monet’s garden “in person.”

Monet loved nature, and he spent his early years traveling along the river Seine, often planting flower seeds as he went along. On one trip, Monet was on a train that passed through Giverny, a rural village on the river Seine, about 50 miles from Paris.

He admired the tiny farming town so much that he wanted to live there. He, his wife, and their combined family of eight children rented an old farmhouse and two acres.

The property, formerly a cider farm, had a huge garden that had fallen into disrepair, but with his family’s help, he turned it into a flower garden. He soon became obsessed with the beauty of his garden, which he grew by swapping seeds and cuttings with friends, and ordering plants by mail.

He studied horticulture and consulted with botanists. He planned his garden with an artist’s eye, and the result was a constant play of color and light. His flowers included both ordinary and exotic. Monet’s garden became more extravagant, and eventually he was able to hire a small staff of gardeners.

Claude Monet was the founder of French impressionist painting — a new and rebellious style at that time. Some say that while most artists captured what they observed in nature, Monet was the first artist to create the landscape, and then paint the controlled environment that he had created.

Later, Monet decided he wanted to build a Japanese-style water garden, but trying to convince the local bureaucrats that his pond wouldn’t contaminate the area’s supply of drinking water became so frustrating and infuriating that he nearly gave up. However, the garden was finally authorized in 1893.

Monet constructed Japanese bridges over the pond, then created atmosphere by planting plants such as maple trees, gingko, peonies, bamboo, willows, lilies, and of course, lotus and other aquatic plants in the pond itself.

His water garden grew in importance, and one full time gardener was hired to keep the pond in perfect condition. Monet spent hours in this peaceful oasis, and loved showing it off to visitors.

Monet lived in Giverny until his death in 1926. His garden and home are now maintained by a nonprofit organization, with much of the funds for restoration donated by Americans. Monet’s garden is classified as a national historic monument.