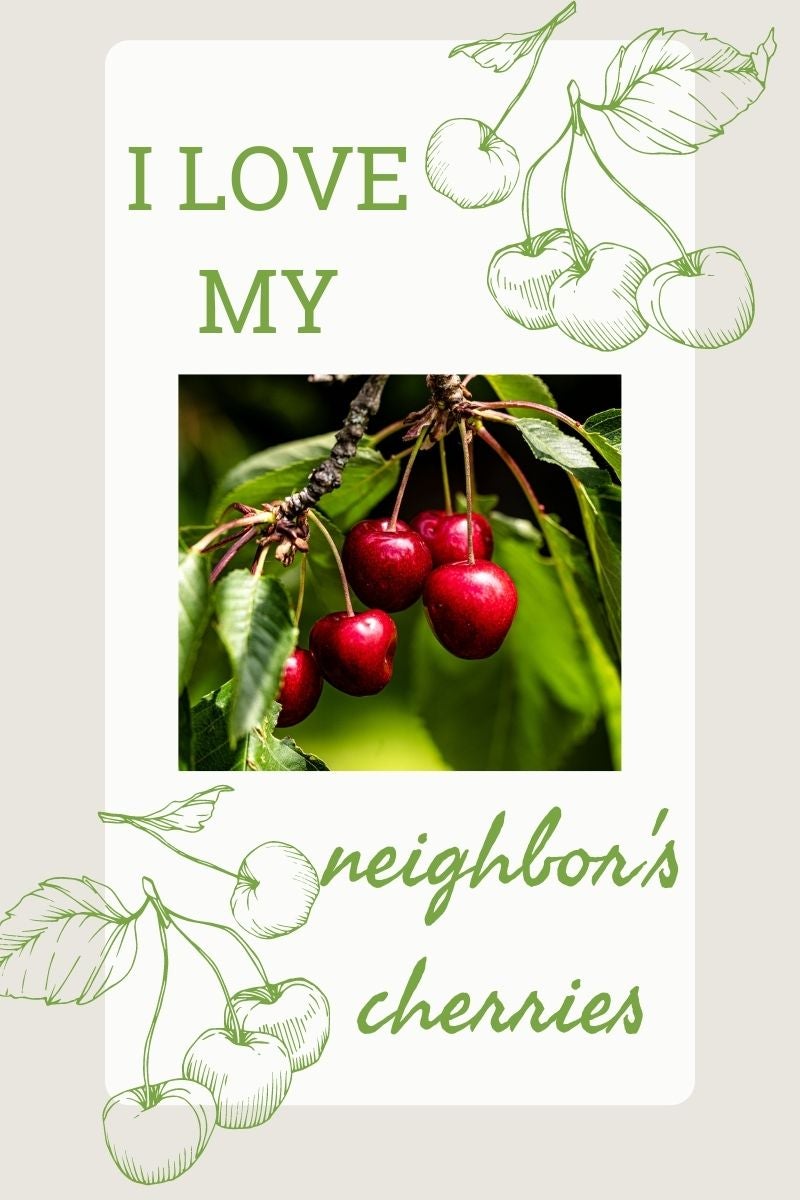 What is better than growing cherries in your own back yard? Having a neighbor who grows cherries! I must admit that the fruit I look forward to most in the Basque Country are the cherries that ripen on my neighbor’s tree. But it isn’t as much a sin as you might think!

My little house in France’s Basque Country is in the foothills of the Pyrenees.  To get up, you have to drive a four-by-four or be prepared for a brisk, 10-minute hike uphill. My closest neighbor is some distance away, but there are fields just down the hill from my house on which a farmer grows grass and a type of eagle fern for their livestock in the winter.

That particular farmer – whose name is Xabi – leaves a few clusters of trees on the field to supply shade to the sheep in the heat of the summer, Merisier trees. They are essentially wild cherry trees in the same family as cultivated cherries. I have a few on my land as well, but the birds take the small fruits before they even ripen, so I never get many.

On the other hand, my neighbor’s 12 Merisier trees produce enough fruit that there are always dozens of wild cherries to pick. They are not sweet like cherries that ripen on regular cherry trees, but they are quite nice to snack on.

Then, about 10 years ago, Xabi decided to graft cultivated cherry branches onto some of his Merisier trees. One fall he pruned the trees back by several feet as usual. Then he cut some of the Merisier branches quite short on a deep slant. He brought cherry cultivar branches over to the area, also cut on a deep slant.

He lined up the cut parts of the branches with the open wounds on the branches and wrapped them together with circle after circle of twine. These grafted branches grew as the warm autumn rains fell. By the following spring, these grafted trees were producing leaves.

Cherries That Ripen in My Neighbor’s Field

The next June, as I drove my four-by-four by Xabi’s field, my daughter saw something bright red in the trees. Merisier fruits are round like cherries but much smaller and burgundy, not bright red. We stopped and hopped over the fence to look.

Yes: the grafted branches were bearing cherries, big, red and sweet. We took a handful with us and savored them. The next time I saw Xabi working the field, I stopped to tell him we had sampled his cherries. He was pleased. As it turned out, he had grafted the branches to give the bees some variety of blossoms and really didn’t like cherries at all.

Needless to say, we took advantage of his kind invitation to eat as many as we wanted. Even now, years later, I look forward to June to be able to pick the cherries that ripen in my neighbor’s field.