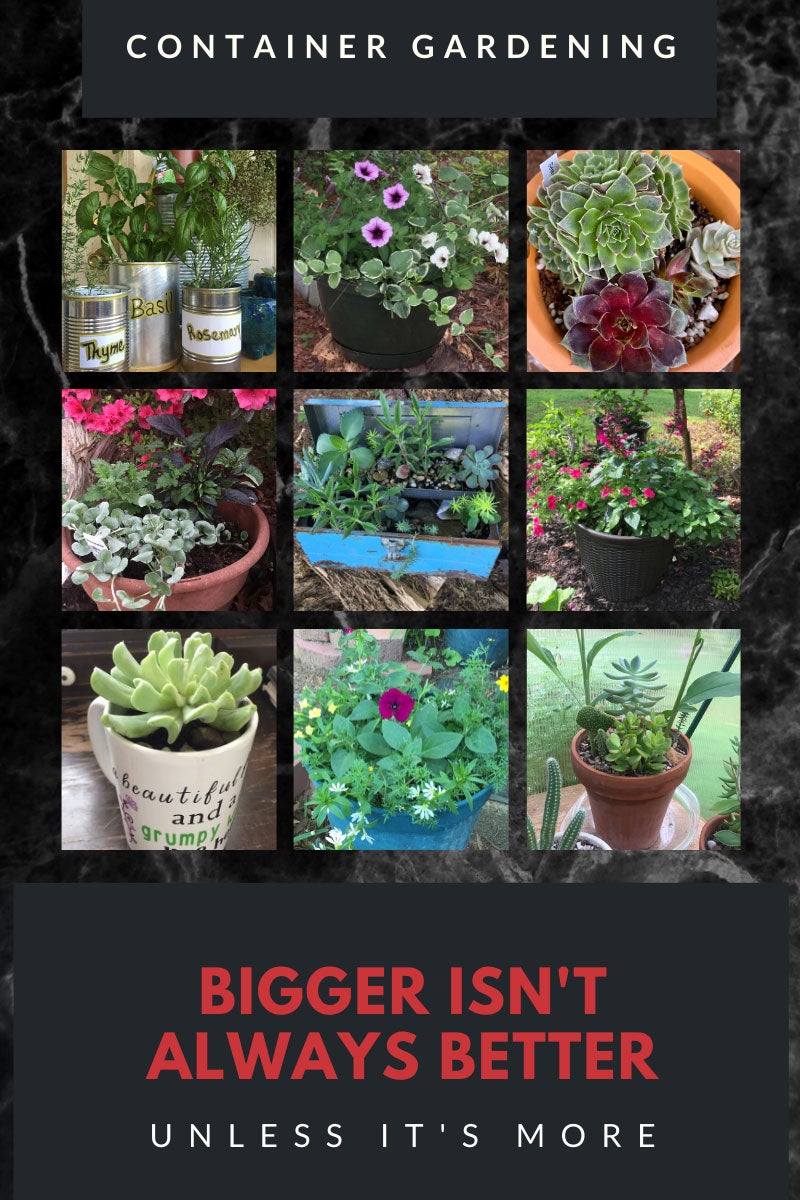 I’ve never been one to follow the so-called “rules” for gardening. I prefer to follow my own path, experimenting and making up my own rules. And while most of the time this works out, there have been moments where trying my own thing has led to failure (and heartbreak). But such is life and we must soldier on in the wake of such losses – hopefully with our pride in tact and a willingness to learn from our mistakes. Container gardening is no exception.

I once thought growing plants in pots simply meant sticking a lone plant into one large container and being done with it, other than occasional water now and then. Not so! I learned the hard way that bigger isn’t always better when it comes to growing plants in containers. I often wondered why my plants looked so spindly or failed to thrive and fill out in their potted environments. There’s a reason for that.

A little plant with a smaller root system in an oversized container is far more difficult to water efficiently for one thing. You either don’t water it enough for fear of drowning the little tyke or you do the opposite and thoroughly saturate the pot (cause that’s what you’re supposed to do, right?) and only end up rotting the roots, especially since the container stays wetter longer than in a smaller pot.

It also took a while to understand that repotting something into another container doesn’t mean two or three sizes bigger. Choose a container that is only a few inches larger than the old pot; one size up is ideal.

Truth is, most plants are quite happy in a contained environment with little space, especially succulents, which are known for their shallow root systems. Shallow rooted plants also do well in pots that are wider than they are tall. Of course, there are exceptions to adding small plants to bigger containers – like vegetable seedlings that don’t typically benefit from transplanting as they grow. Most vegetables also benefit from deeper pots, and vining types perform better in broader containers such as half barrels, which are relatively deep too.

A large pot also is necessary when growing more than one plant together, be it herbs, houseplants, flowers, etc. It never occurred to me in those earlier years that you could actually grow more than one plant in a container. Surprisingly, many plants grow happily together in those larger pots. And they look better too.

As long as you allow enough space for them to grow, you can basically have plants in nearly any small pot. And when you do have a large container, add more than one plant. You can always follow the rules of planting more than one using the thriller, filler, spiller method or go your own route and just plant what you want (provided they share similar growing conditions that is).

I’ve come a long way since those newbie days and now I’m well known for growing plants just about anywhere and in anything, from old purses, books and boots to veggie cans, cups and teapots. No more single tiny plant in a huge pot for me”¦now I fill those suckers with whatever I can (sometimes literally)!