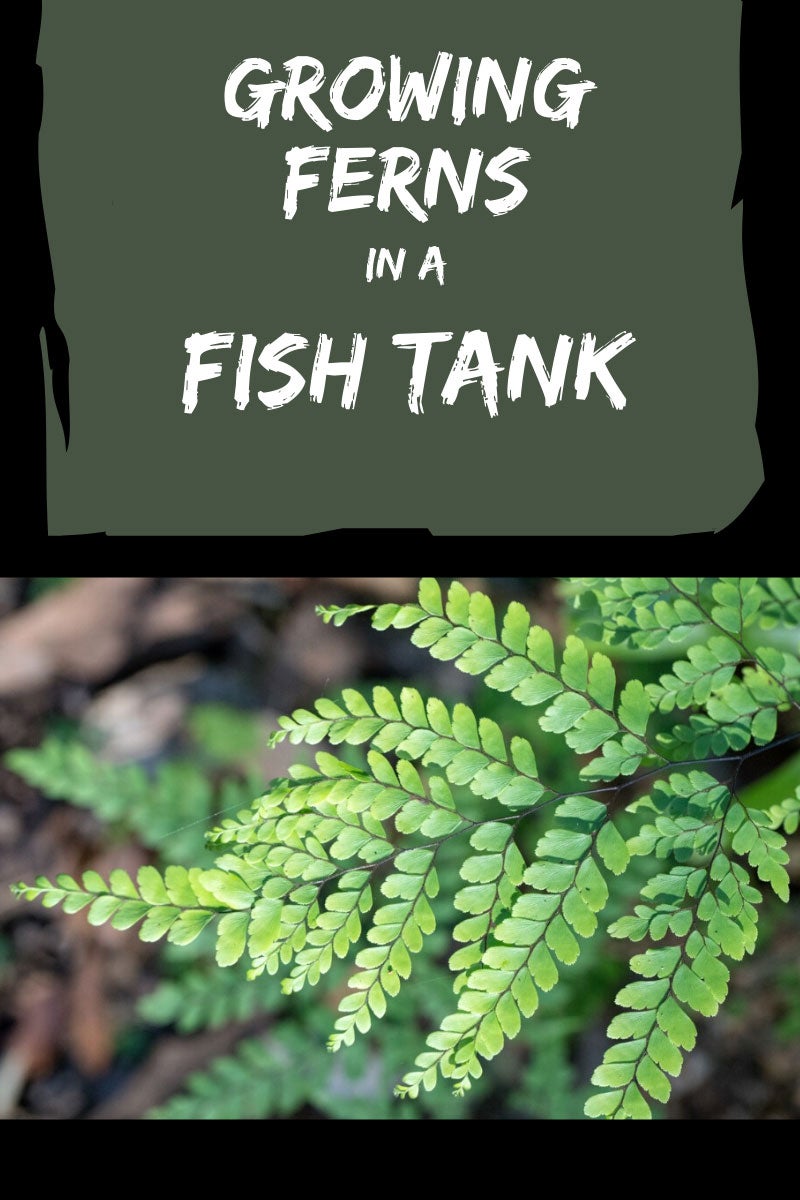 Aquariums are incredibly versatile. While I don’t do live fish anymore (yes, there’s a story!), I still keep an aquarium in the living room. It’s where my maidenhair fern lives. Here’s how my idea of using aquariums for plants got started.

If you’ve never had a bad experience with a fish tank, you are a very lucky person. My first exposure to fish tanks was when I was 10 years old. I fell while ice-skating on a frozen lake in Alaska and knocked out both front teeth. We drove 100 miles to see the nearest dentist in Fairbanks and he had a fish tank in the office. From that moment forward, root canals and fish tanks were inextricably linked in my mind. That was enough, but it wasn’t all life had in store.

When I was married, my spouse took a sudden shine to tropical fish and came home one day with an aquarium and all the fixings. Soon after came the fish, too soon, in fact, since they began dying the next day. And then followed an awful period of a month or so where I would find a dead fish or two floating in the tank every morning when got up for my coffee.

Neither that husband or the aquarium lasted very long, but my current living room has a fish tank as part of its décor. This one I found on the street, doubtless dumped after a story similar to my own.

Sitting there on the sidewalk, the glass container looked a lot like a little greenhouse, and, on inspiration, I brought it home and cleaned it thoroughly, thinking I would plant herbs in it. This didn’t work out very well since most of the herbs I use do not tolerate humidity. But that happened to be just what my maidenhair fern required.

I fell for a maidenhair fern in the garden store, buying it and carting it home, but neither I nor the fern were very happy with the arrangement for many months. The fern needed moist soil, which I could do, but also bright indirect light and high humidity. I had to move it frequently between the bathroom, where the humidity was high, and the bedroom, which got indirect sun, and it never thrived.

When the aquarium appeared in my house, it seemed like it might be a solution. I placed a large saucer with pebbles and water in the base of the aquarium, then set the fern pot on it. I added water to the saucer as I watered the plant and, day by day, the maidenhair grew healthier. Fresh green foliage appeared and new young shoots. Living in the abandoned aquarium, my maidenhair fern is happy at last. Apparently, growing ferns in a fish tank works well – lasting much longer than those fish or my marriage did.