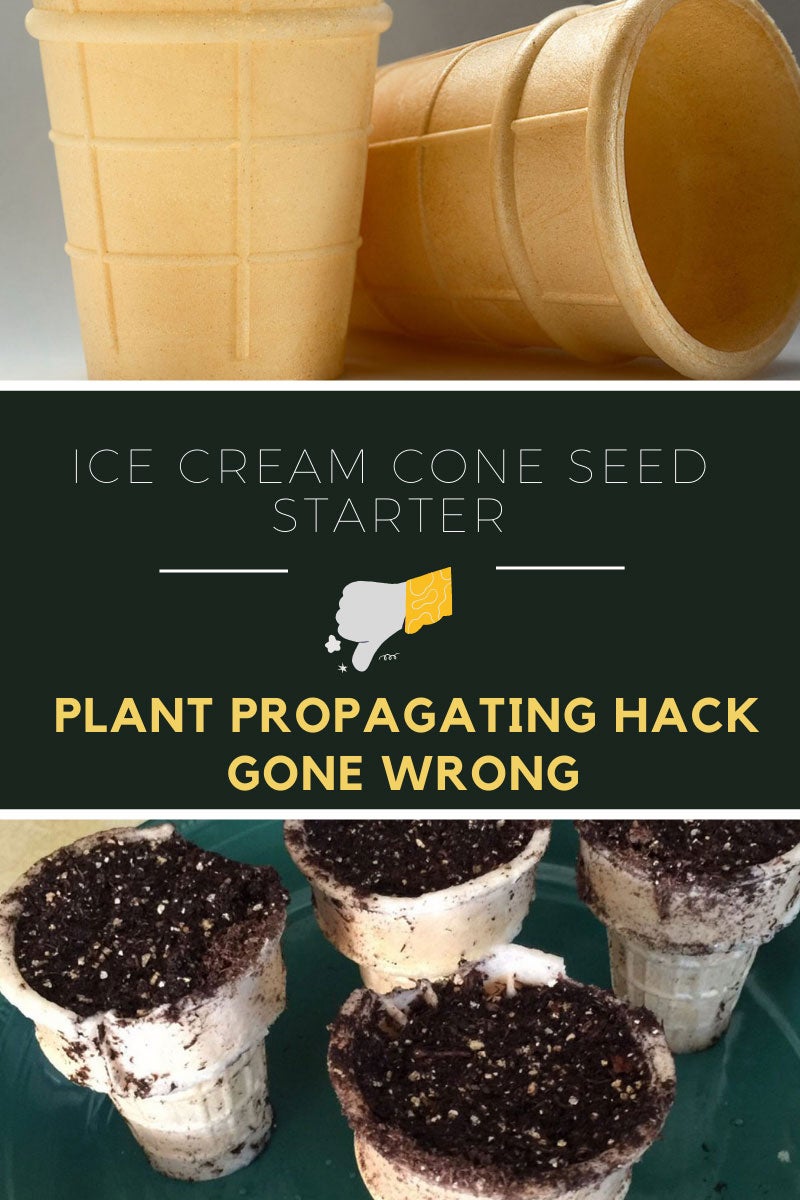 When I first started gardening, I often found myself feeling frustrated by a lack of supplies. I had not yet invested in many of the materials that I really needed. From watering cans to seed trays, I had set a very strict budget for my new hobby. In doing so, I often scoured the internet, looking for the next great “gardening hack” that would solve all of my problems.

It was a bright, sunny day in spring that I decided my attempt at starting flower seeds in ice cream cones.

Before I even start explaining my unfortunate experience sowing seeds in ice cream cones, it should be noted that I was already somewhat skeptical. Afterall, I love eating ice cream. Why would anyone want to waste the cones like this? I realize that cones are relatively cheap, but they’re also delicious. Despite my hesitation, I decided to give this gardening hack a try.

The idea of an ice cream cone seed starter gained traction very quickly on the internet, with the most popular image being one in which what appears to be clover growing from a cone. After trying the plant propagating hack myself, I’m fairly confident that the image is not true to life.

I filled my ice cream cones with soil and pressed in the seed. I made certain not to overwater, as I knew that this would only lead to potential problems. The next morning, when I checked my ice cream cone planters, I had discovered that they had all collapsed! Each one had already become soggy, almost beyond recognition. To my surprise, they were also covered in ants! I quickly moved the project outside and decided that I would continue from there.

A few days later, my seeds finally germinated. The problem? Many of the cones were also covered in mold. Due to their fragile condition, picking up the cones to plant them would have been impossible. Not sure what to do, I decided that I would let them continue to grow for a few more days.

Two days later, when checking on the cones, I was shocked to see that they had vanished! I was honestly relieved, as I didn’t exactly want to clean up the green moldy mess. While I’m still not certain what ever happened to the cones, I can only imagine that my local garden raccoons may have been the culprit. This gardening hack certainly did not work for me.

Note on This Gardening Hack

Our senior editor also gave this a try with varying results. First time was an epic garden fail: cones became soggy and moldy. Second attempt, not to be outdone by failure, results were iffy but workable. Only lightly misted the cones, kept them in more light to prevent sogginess (dry out quicker), and seeds germinated well.

Then, rather than waiting for the seedlings to grow larger in the cones (like that aforementioned picture), the cones were “planted” in a container where they were free to break down and the seedlings able to grow freely. While some of the seedlings perished, there were survivors! So it CAN work, but you have to get creative.