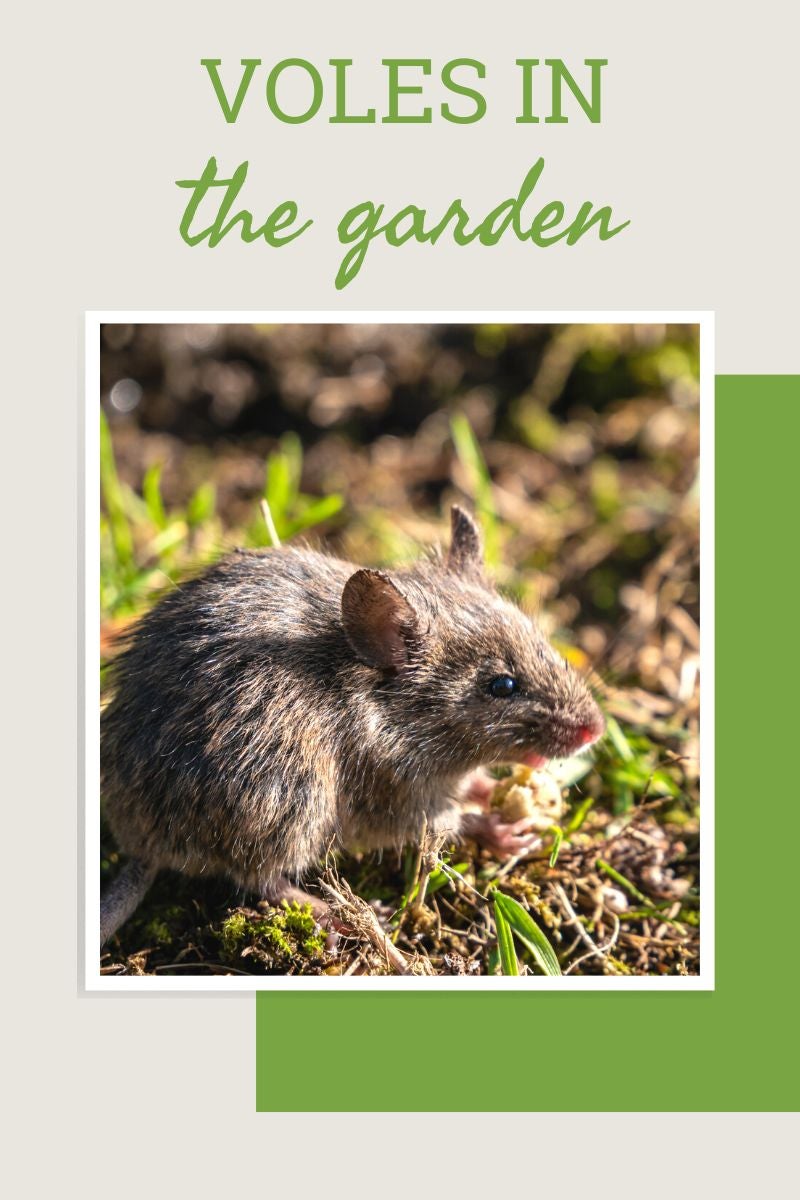 When we bought this house, it came with many helpful garden items. There were numerous types of hose, sprinklers galore, rose systemics, herbicides, and a huge bag of vole bait. This should have been a clue, but I didn’t see any vole damage and don’t believe in chemical poisoning to control pests. I have cats as pest control.

Voles in the Garden

Voles are tiny rodents, even smaller than field mice. They make tunnels in the soil, often in your sod. Apparently, every three to five years a vole population will boom. Last year, we had a very mild winter, which encourages vole breeding. I never really noticed much in the grass as it is very uneven already. But this spring, as I started the first mowing cycles, I noticed even more bumpiness. And it was in obvious, snaky trails. It is a minor inconvenience when mowing, creating an uneven cut surface. But I still didn’t think much of it.

I planted some new shrubs and also an early veggie garden in spring. Oddly, many of my root vegetables had started to disappear. Also, my new plants were doing poorly. I pulled one gently to see if it was rooting, and not only was it not rooting, it lacked most of its roots. Nothing still gave me the answer, even though all the signs were lining up to a clear fact. I had voles.

I may have mentioned we were gifted kittens by a feral mama cat. They were raised on our patio until ready to wean when we caught them and brought them indoors to socialize, get fixed, and have shots. We kept two who are allowed outside during the day. Well mama did a great job of raising them. They are killers. And they were the first to really open my eyes to the extent of the voles in the garden.

Cats love to present their people with tokens of love. Often birds, but also mice and other small prey. Our kittens are quite fond of a good vole hunt. Most mornings I can rely upon being greeted by a dead vole, or two, or three. Both like to toy with the small rodents which I feel is not fair, so I often cut short the game and dispatch the poor, cowering thing myself. The kittens eat only the head, which is odd. So little bodies are left to be cleaned up.

I don’t use chemicals in my landscape so vole bait is out of the question. I suppose I could get traps and use peanut butter as bait. However, cats as pest control seems environmentally friendly and non-toxic. Also, voles in the garden can be a bad thing, but it keeps the kittens busy enough so they ignore the song birds. All in all, a win-win for our avian population. Sorry voles. You can’t win. You are outmatched by some sneaky, wily kittens.

Now that I am sure I have voles, I can throw out the vole bait. I don’t need it. I have a healthy clowder, or group of cats. There are six here in my landscape, all capable of taking down a vole population. The older ones are lazy, fat housecats, but the young ones? Watch out voles.