Western Juniper Trees: The Good, The Bad, And The Ugly 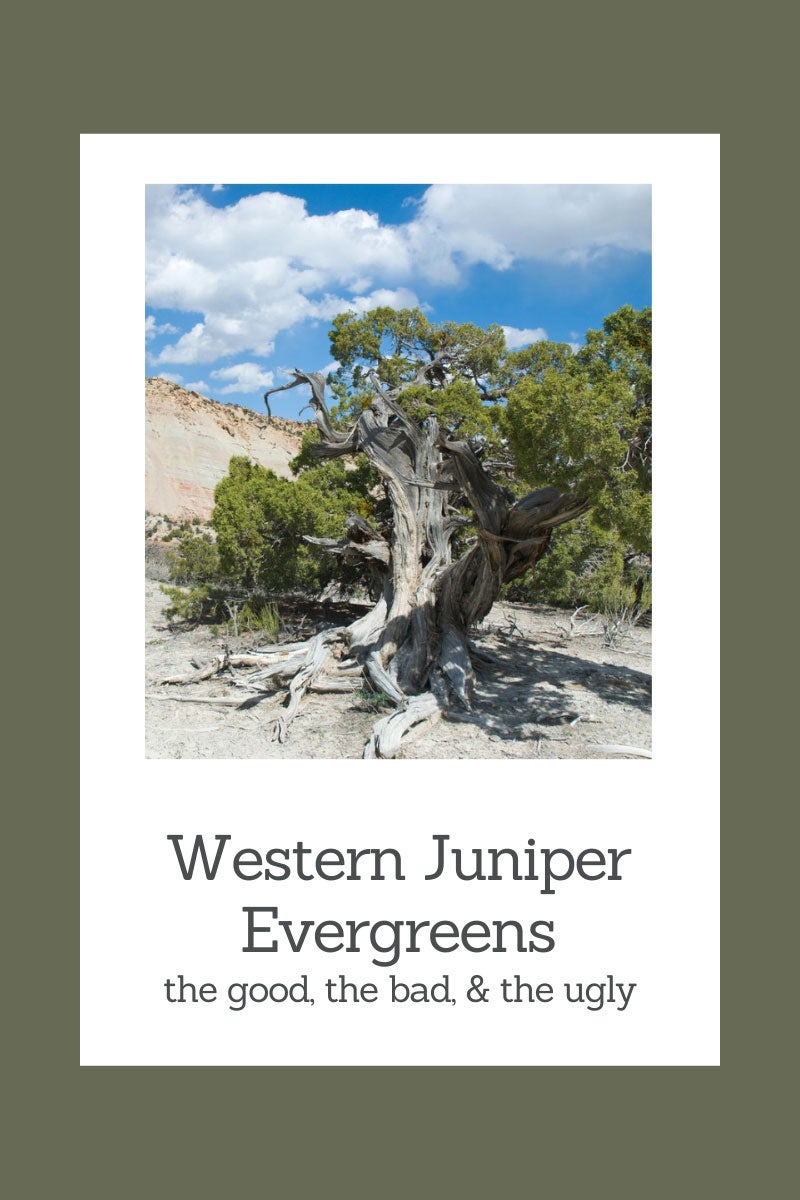 I love and appreciate evergreens in the garden, which require almost no care and look nice all year. Without them, things look pretty bleak between November and March.

The Pacific Northwest is home to millions and millions of trees, including both deciduous and evergreen. The majestic “Doug Fir” is the state tree. I am a desert dweller from the arid eastern part of Oregon. Trees are so lush and dense in Western Oregon that the beauty and sheer number of trees still takes my breath away.

Trees are sparse here in Eastern Oregon, and it’s possible to look miles and miles in either direction without seeing a single one. That might sound horrible to you, but the open country, deep canyons, uninterrupted vista, and big sky have a particular type of rugged beauty.

In Eastern Oregon, you might see Ponderosa pine, lodgepole pine, western white pine, grand fir, and western larch. However, trees in this part of the high desert consist primarily of western juniper (and sagebrush, which is technically a shrub, but it is linked to juniper and is important to the ecosystem).

Western juniper is an interesting, oddly attractive plant with tough, crooked, gnarly branches and loose, scaly, reddish-brown bark, especially as trees mature. Birds love the odd-smelling, bluish-purple berries, and new junipers grow undisturbed from the seeds dropped in bird poop. Because of its weird nature, juniper doesn’t have many practical purposes, although it makes good, but messy, firewood.

Juniper has actually become troublesome in some areas. According to the U.S. Department of Agriculture, juniper forests in Oregon have increased from about 420,000 acres in the 1930s to over 3 million acres today. The slow, steady expansion is blamed on overgrazing by early ranchers, fire suppression, and climate change.

It’s an interesting example of how everything is connected: Overgrazing has reduced the amount of fuel to carry fires that would kill smaller juniper trees and keep stands under control. Warmer, wetter weather has also created favorable conditions for juniper to expand its range. Juniper sucks up water, which is already in short supply in the high desert. A mature juniper tree can consume 10 to 30 gallons per day, which draws water from nearby springs and streams.

As a result, juniper outcompetes native grasses and sagebrush, thus degrading habitat for the sage grouse, Brewer’s sparrow, and other birds that use sagebrush for nesting and food. Pronghorn antelope and bighorn sheep are more vulnerable to cougars, which stalk prey by hiding behind juniper trees.

Over half of Oregon lands are managed by the U.S. Forest Service and the Bureau of Land Management (BLM), which are slowly ramping up efforts to restore Eastern Oregon’s sagebrush-steppe ecosystem. The goal is to retain old-growth juniper stands while regaining control over younger, invading high desert junipers.