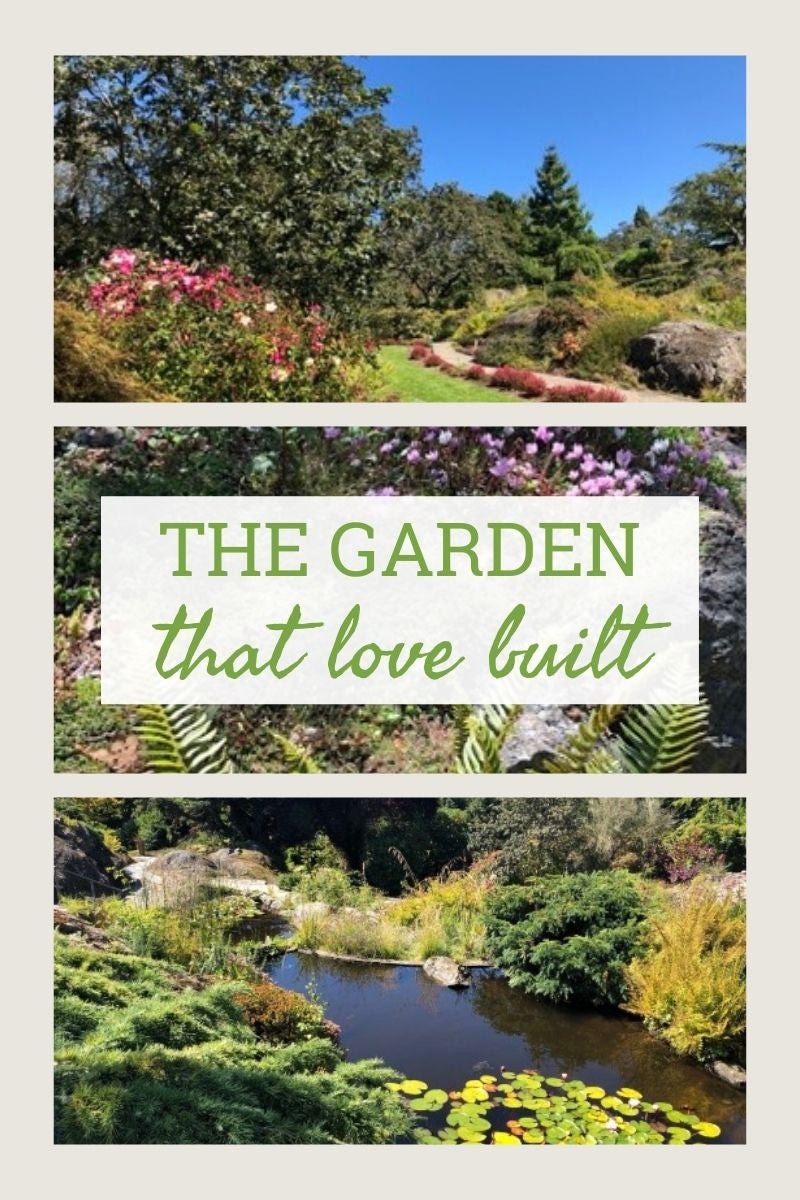 Image by Peggy Doyle via Gardening Know How

Victoria, British Columbia is famed for its gardens, attracting tourists and locals alike to its verdant beauty. But none rival the Abkhazi Garden and its love story that spans many continents and decades.

Prince Nicholas Abkhazi, the last in the royal line of Abkhazia, a state between modern-day Russia and Georgia, had been living in exile since the Bolshevik Revolution. Peggy Pemberton-Carter and her mother lived in various places all over the world. The two met by chance in Paris in 1922 and fell in love.

They didn’t marry immediately, though. In fact, they saw each other only occasionally. But they kept up a correspondence — and a fascination with each other — for years.

The arrival of the Second World War further put off any chance of their coming together. Nicholas, a member of the French army, was captured by the Germans and sent to a POW camp. Peggy, living in Asia at the time, spent the war in a Japanese camp in Shanghai.

When the war ended, they found each other, and though they hadn’t laid eyes on each other in over a decade, they decided they’d never be apart again. The couple married and moved to Victoria, BC, where they bought a home and a one-acre garden.

The Abkhazi Garden, as it came to be known, is very well-hidden behind a tall hedge and a fence in a quiet residential neighborhood. There’s no sign of it from the street, so a casual passerby could easily not even notice it.

But notice it people did, as Nicholas and Peggy cultivated it and tended to it over the course of their lives together — more than 40 years. The couple never had any children, instead referring to the garden as their child.

In the year 2000, after Nicholas and Peggy had passed away, the Land Conservancy of British Columbia bought the property, transforming the Abkhazis’ home into a tearoom and offering tours of the garden.

Now, more than 20 years later, the Abkhazi Garden is as beautiful as ever, a testament to the love of two people who found each other and swore never to let go.

Peggy and Nicholas designed their garden to reflect both their individual past histories as well as their shared life together. And they did this while also featuring the plants native to British Columbia and the unique aspects of the site, such as the views and the rock formations.

Peggy found inspiration in her years living in China, and conceived of the garden as a Chinese scroll, gradually revealing a series of garden “rooms” as it unrolled before the visitor.

After entering through the garden gate, the visitor passes through a woodland garden, an understory of rhododendrons, ferns, and other shade garden plants beneath the sculptural Garry oaks native to the area.

From there, the path leads to the South Lawn which frames the view to the original house, now a tearoom. The house is sited on an elevation and surrounded by natural rock formations, which the Abkhazi’s used as another framing device for the house, while also incorporating water features on this rocky hillside. The overall effect enhances the long views and provides a sense of a garden much larger than the true size of just a modest acre.

The next space on the tour is another garden space inspired by Peggy’s life in Shanghai. The garden leading from the South Lawn to the Summer House was dubbed the Yangtze River. An undulating green lawn edged with heather; this part of the garden celebrates the natural attributes of the site.

The Summer House was the first building placed on the site. It is both a focal point in the garden, and a wonderful vantage point to take in the garden’s rooms and overall design.

End your tour of this gem of a garden on the House Terrace, where you will be able to take in views of the entire property as well as expansive views beyond to the city of Victoria, the Strait of Juan de Fuca, and the Olympic Mountains.

Printer Friendly Version
Read more about Virtual Garden Tours
<Previous
Did you find this helpful? Share it with your friends!
FacebookTweetPinEmail

Image by Peggy Doyle via Gardening Know How