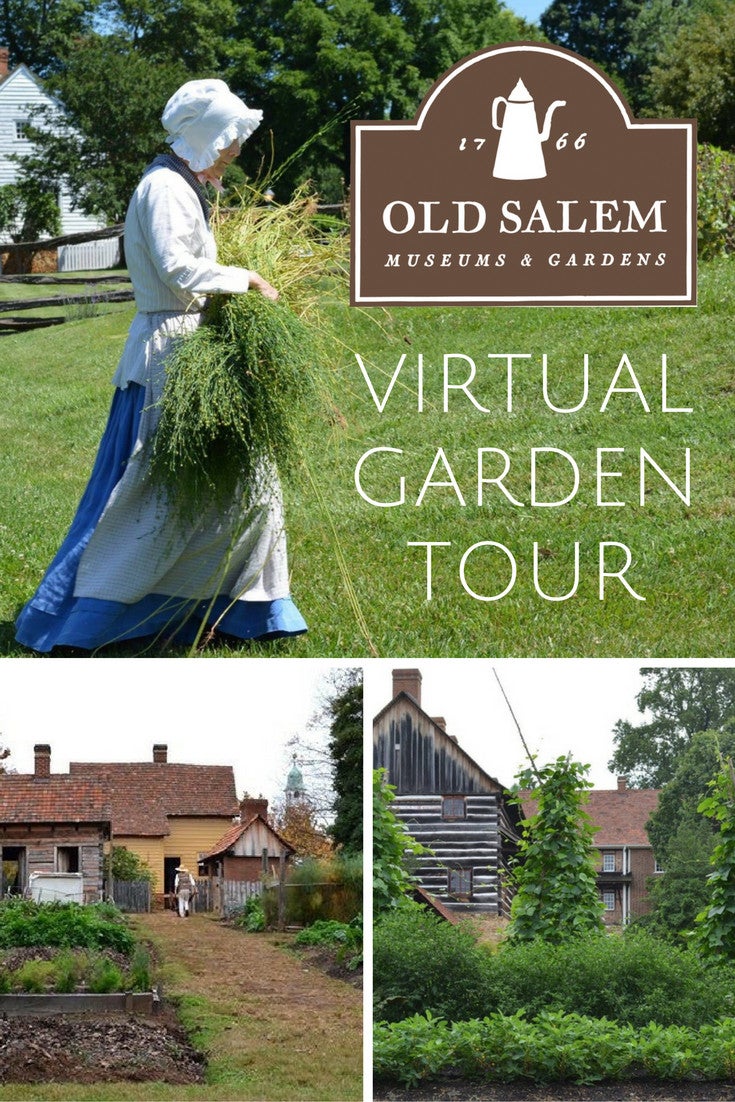 The Moravian town of Salem, now referred to as Old Salem, lays just outside the outskirts of the busy city of Winston-Salem, NC. While most people enjoy visiting this quaint museum town of Old Salem simply for its historical buildings and Moravian heritage, there is another reason to come here – the gardens.

In Old Salem, every house had a garden, and everything grown had a reason for being there. All of Salem’s gardens today have been recreated on their original sites, targeting the specific time period; for instance, in the Single Brothers’ Garden, is a kitchen garden, which fed men and boys of the Single Brothers’ Choir and is laid out much like it was then – in large squares on earthen terraces. As a result, Old Salem is considered to be one of the most authentic restorations in the U.S. 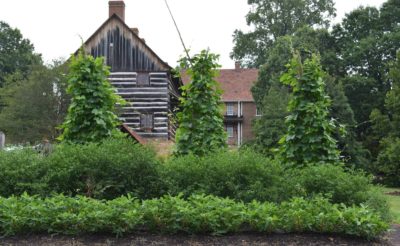 The landscape surrounding this town have been carefully researched and recreated to mimic life according to the German culture of these people. Here you will find growing together in perfect garden squares a variety of heirloom vegetables, herbs and ornamental flowers, all retaining blissful harmony with one another. An array of fruit trees can be found growing within orchards and family gardens. Additional interest can be found in the sections of split-rail board fencing or, my favorite, the snake-rail fencing that borders much of the area, outlining original property lines. Along the streets are native trees, such as red maples, replanted to imitate its history, and deeply rooted in local Moravian tradition.

Just as the Moravians created beautiful, functional gardens to satisfy their ‘Old World’ aesthetics, so do the Salem gardeners today. Plant materials are restricted to only those that were known to be in cultivation during the particular time period, typically before 1850. During this period of time, people relied heavily on their gardens for food, medicine, and crafting. Most of the gardens are comprised of long, narrow lots enclosed by fences and located at the rear of the property. Family gardens commonly grew vegetables and ornamental plants together in squares or rectangular plots surrounded by grass, bark or bare dirt paths. Also found growing along property lines at the rear of the garden stand fruit trees, like apple and cherry.

-placead-The Leinbach Garden is a fine example of the family garden at that time. Located and recreated along Salt Street in Old Salem, the garden of John Henry Leinbach, the town’s shoemaker, accurately reflects the style and materials seen in backyard gardens before the mid-nineteenth century. Enclosed by a fence, the garden, which depicts the year 1822, consists of six garden squares with fruit trees and border beds along the sides. The rear of the garden is sloped with three of its garden squares terraced using stone and sod. Within the spring garden is a multitude of vegetables such as lettuce, peas, carrots, onions and cabbage followed by summer crops like beans, squash, melons, and peppers. All the varieties used here are heirloom varieties. Old-time variety herbs are present in the garden as well, intermingled with vegetable plantings. These were often used for both seasoning and medicinal purposes. A wealth of ornamental plants common to the period are included too. 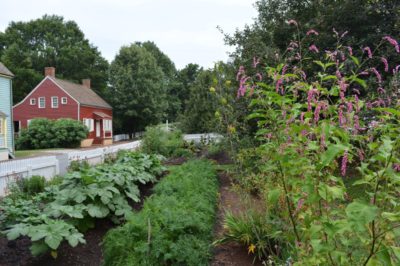 Other gardens of interest include the Cape Fear Bank Garden (serving the banker and his family), the Levering and Schroeter Gardens (belonging to Salem’s tailors), the Triebel and Miksch Gardens, the Vogler Garden and the Vierling Garden (the town’s doctor). The Salem Tavern also maintained a vast vegetable garden, but in the center of this garden is another point of interest – a careful planting of cedars forming a circle and ‘chained together’ at the tops to create an arbor. The tavern operated as a hotel during the Civil War, and it was here that many of the guests enjoyed sitting. Today, a costumed staff serves lunch and dinner throughout the week to visitors of the museum. Salem Square reflects a variety of landscape features common to the time period as well, such as perimeter plantings of sycamores and tulip poplars.

In addition to the family gardens, residents often obtained and managed small tracts of land for livestock or for growing field crops, such as wheat or potatoes. These were generally located at the edge of town. Some gardens were even grown strictly for pleasure. For instance, the Single Sisters once maintained a large garden, but this was eventually reduced to a succession of small garden squares behind the house, each sister with a garden of her own. Here one would grow mostly ornamental plantings such as cockscomb, larkspur, daffodils, coreopsis, lilac and hyacinths. 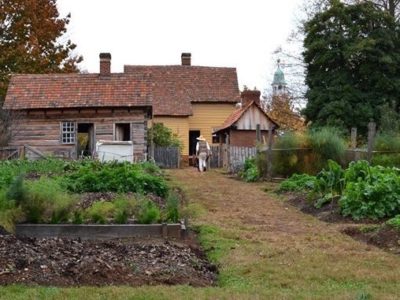 Old Salem has one of the leading horticultural restoration programs in the country, and as a result, Old Salem’s garden history still flourishes today. It can be seen as you walk along its streets, found in the numerous roadside plantings of native trees and shrubs, like towering magnolias and Carolina allspice. It can be viewed in the old-time orchards containing pear trees and cherries. It can be found in the recreated family gardens overflowing with heirloom vegetables, herbs and ornamental favorites like hollyhocks and antique roses. Its rich history can also be found in the field crops of cotton, flax and tobacco, all of which are used in hands-on demonstrations of old world techniques for spinning and tobacco processing.

The gardens of Old Salem are maintained by a staff of knowledgeable gardeners specializing in historical methods of cultivation. Only plants found growing during a particular time are represented in each garden. Most of the plants are grown from seed that is collected each growing season, many of which are sown directly into the garden beds. Much of the produce is used in cooking demonstrations for visitors with the remaining crops dried, pickled or stored in root cellars. Just as with the Moravians of this time in history, nothing in these gardens is wasted. Likewise, you’ll find no chemicals being used in these natural gardens. Instead, composting play a significant role in fertilizing and beneficial insects help keep pests at bay. 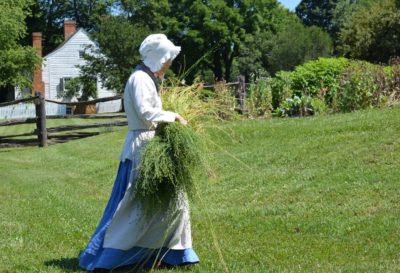 The natural beauty found in the gardens of Old Salem not only provides interest to visitors year round but offers an inside glimpse into the simple lives of the local area’s founding fathers and a community of individuals that took pride in the natural resources available to them. I was lucky enough to have grown up in Winston-Salem, where school field trips are quite commonplace here, having visited numerous times as a child and adult with my own children. My mother even worked there as one of the costumed interpreters where I was fortunate enough to have participated in ‘dressing the part’ during Christmas, walking the streets and talking to visitors. It was an experience I’ll never forget.

So grab a camera and see for yourself just how amazing the historical town of Old Salem and its beautiful gardens are. Take the guided garden tour ($17 per person) or purchase an all-in-one ticket, which allows you to visit all the museum and grounds have to offer – either way, you can’t go wrong. Visit their site for more information on pricing and hours of operation.