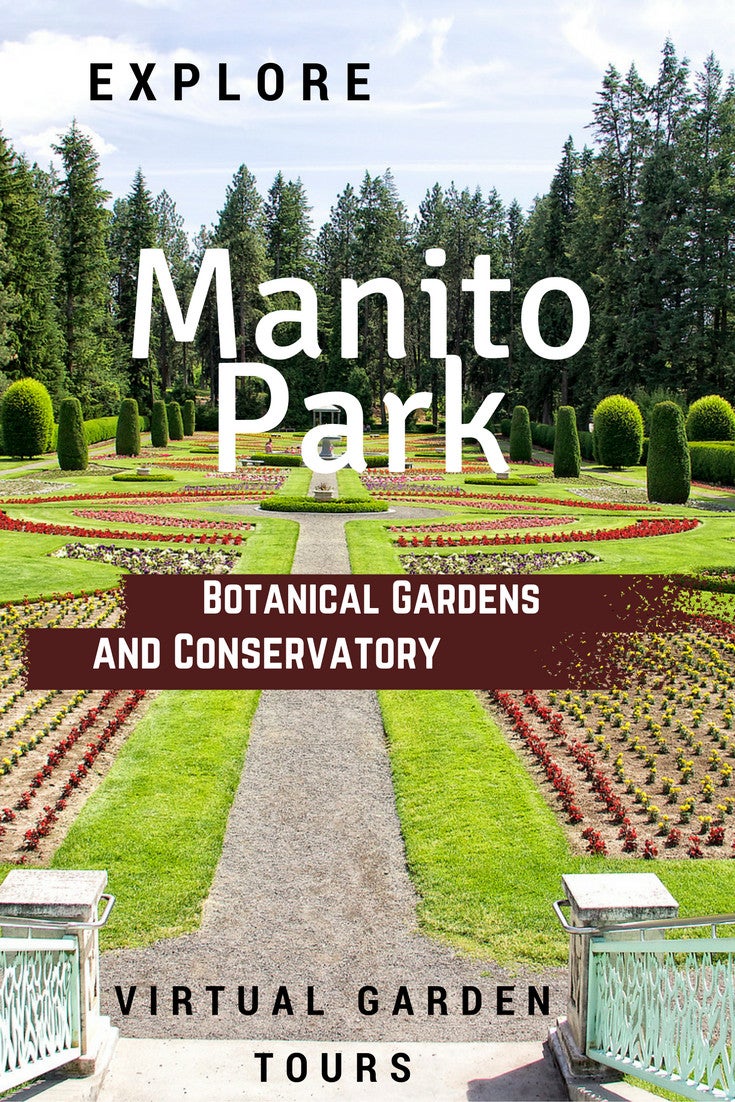 On a recent visit to see family in Spokane, Washington, we indulged ourselves with a trip to our favorite park. This is Manito Public Park and botanical gardens, a 90-acre extravaganza of five individual botanical gardens and a score of recreational pursuits. The park was named in 1903 and was a hubbub of social and recreational activities, including a zoo in its earliest years. While the zoo is a thing of the past, the original conservatory, rose gardens, perennial gardens, formal Duncan garden, Lilac garden (to rival any), and the more recent Japanese garden are all open to the public for FREE.

The park is home to tennis courts, a scenic loop with a historic stone bridge, cafe located in the original 1923 “peanut shack,” duck pond, picnic shelters and playgrounds, but it is the manicured gardens that are my favorite feature. The impeccable Duncan garden is a formal garden built in 1912 by John Duncan. It was originally called the “Sunken Garden” because much of the soil was hauled out of the area to build gardens in the city’s parks, leaving quite a depression. The garden hosts a central water feature and a geometric planting scheme. This 3-acre garden is also graced with deeply green lawns that provide contrast to the seasonal colored beds. Strolling through the garden is pleasurable, but the full breathtaking impact can be viewed at the top of the stairs near the conservatory.

The conservatory houses plant specimens from around the world with a large tropical area and succulent display as some of its more impactful features. It is open daily except for certain holidays with winter hours considerably shorter. The original conservatory was built in 1912 but was replaced by aluminum supports and greenhouses in 1974, although the original stone facing remains on the back side of the buildings. The dome was redesigned and built in 1988 and named after a local park patron, Dr. David Gaiser. Gaiser conservatory is toasty warm in winter and just the place to go to chase away winter blues.

The nearby perennial garden is a riot of color and movement in spring and summer. John Duncan was again the designer, but the park was named after a one time board member, Joel E. Ferris. There are over 300 plant species and it is a favorite viewing spot for butterflies. Across the street is Rose Hill. This was originally established in the 1940’s, although John Duncan was the instigator of the idea. It boasts an attractive pergola, sundial and gazebo among the over 150 varieties of floribunda, tea roses, grandiflora, and miniature roses.

Spokane is known as the Lilac City and it has its own representation of this in the Lilac gardens, which house over 100 named cultivars. Most of the cultivars were originally brought from Rochester, New York, but Spokane homes and parks are graced by many wild and native species. We, again, have John Duncan to thank for the original species though the Spokane Lilac Society is heavily involved today with funding and selection.

The newest garden in the park is the Nishinomiya-Tsutakawa Japanese garden. It took over 12 years of planning, which became a reality in 1974. Nishinomiya is Spokane’s sister city and the peaceful layout is supposed to represent that relationship. The garden has a large pond with an arching bridge over the center and charming begging koi throughout the blue green water. Large boulders accent the sweeping plantings and graceful trees. Sadly, no photography is allowed in the garden, but it is worth taking some mental pictures of the arrangements and housing these away for future moments of tranquility.

Manito was once named Montrose Park, but the name was changed in 1904. Manito means “a supernatural force that pervades nature.” It is a place of deeply diverse plant life and calming natural influences perfect for a stroll, drive, picnic or any type of day excursion. If you ever get the chance, Manito’s gardens are a destination worth some travel.