How to Turn a Bowling Ball into a Garden Globe 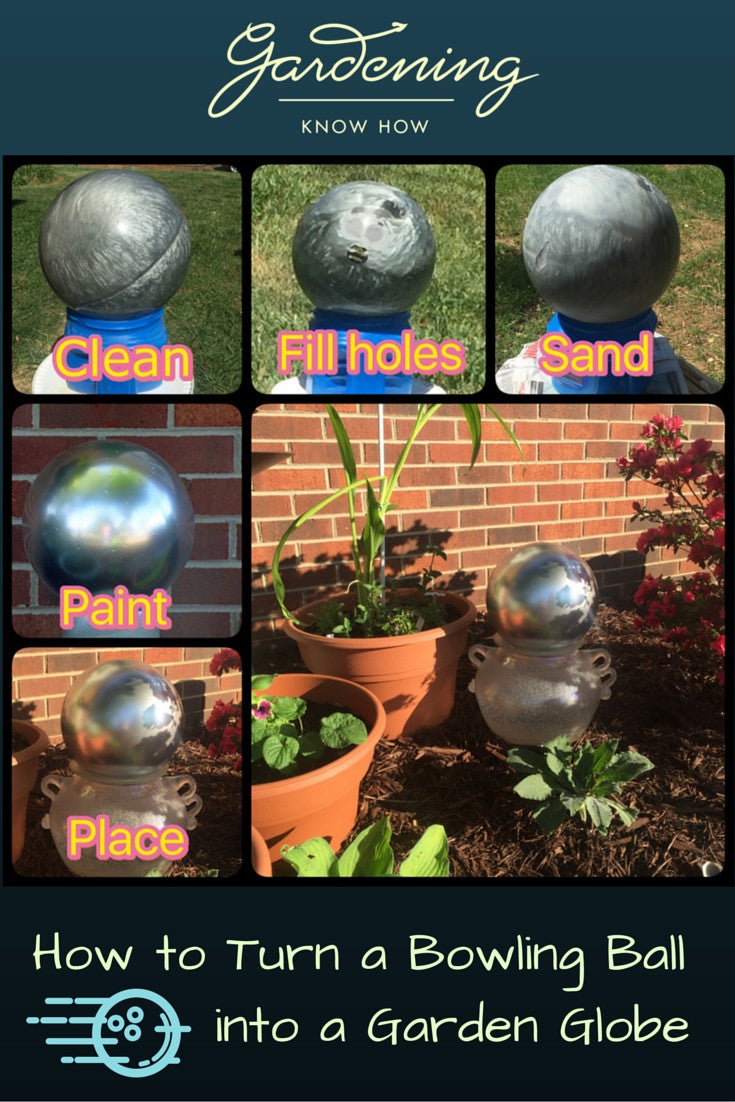 So those that know me fairly well often think I’m nuts or creative – either way, I see myself as artfully frugal. I enjoy making things without spending a lot of money, especially in the garden. Anyone that has a garden knows just how expensive it can be dressing it up, not only with plants. It’s always nice to add an attractive accent here and there, but some of these can be a bit pricey. One such example – a garden globe or gazing ball, whichever term you prefer to use.

My mom had a gorgeous one and she paid right much for the thing. I say “had” cause it got destroyed in a recent storm after having been knocked of its pedestal by a tree, where it met its demise upon crashing to the ground. So long garden globe and all that money spent for it! I wanted one in my own garden but I’m too cheap to buy one. Instead, I took to Pinterest for alternative ideas.

Well, you could say there were many. I weeded through them until I happened across some using bowling balls. Lightbulb moment! Wasn’t there an old one in the woods behind my house? Bingo. It was tossed out years ago by the neighbors, and although much time had passed, I asked if I could have it. I’m sure you could also scour thrift shops, yard sales and such too.

After retrieving the ball, I cleaned it up, wiping down good with rubbing alcohol (removes wax finish). Once that’s done, you simply let the ball dry. Next, you need to fill in the finger holes and any nicks, which after having sat in the woods so long, this one had more than a few. Wood putty works well for this but it just so happened that the hubby had some cement stuff similar to putty left from work that not only did the job but was FREE (told you I was cheap).

Note: If you don’t have a pedestal for your ball to sit on, just do like I did and grab an old bucket, turn it over, cover with newspaper and set an old coffee can on it. I found this to work just as well for holding the ball while drying and painting later.

When the holes and any other cracks are filled, the bowling ball needs to dry thoroughly for about an hour or so (depending on what you use). Once it’s completely dry, lightly sand the ball to rough it up some, which helps paint to stick better – or even glue if using mosaic tiles.

Wipe down the ball with cloth and you’re ready to paint. You can use any color you want for yours, but for mine I went with a metallic, high gloss spray paint (only a couple bucks) in silver/chrome to create a mirror-like effect. Again, you will need to let it dry and add more coats as desired.

When you’re pleased with the final outcome, simply place it in the garden and enjoy! You’ll have an attractive addition for next to nothing. 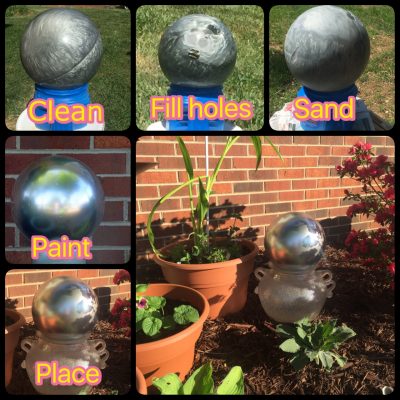 Printer Friendly Version
Read more about Gardening DIY
<PreviousNext>
Did you find this helpful? Share it with your friends!
FacebookTweetPinEmail