Q & A with Ann McClellan, author of Bonsai and Penjing 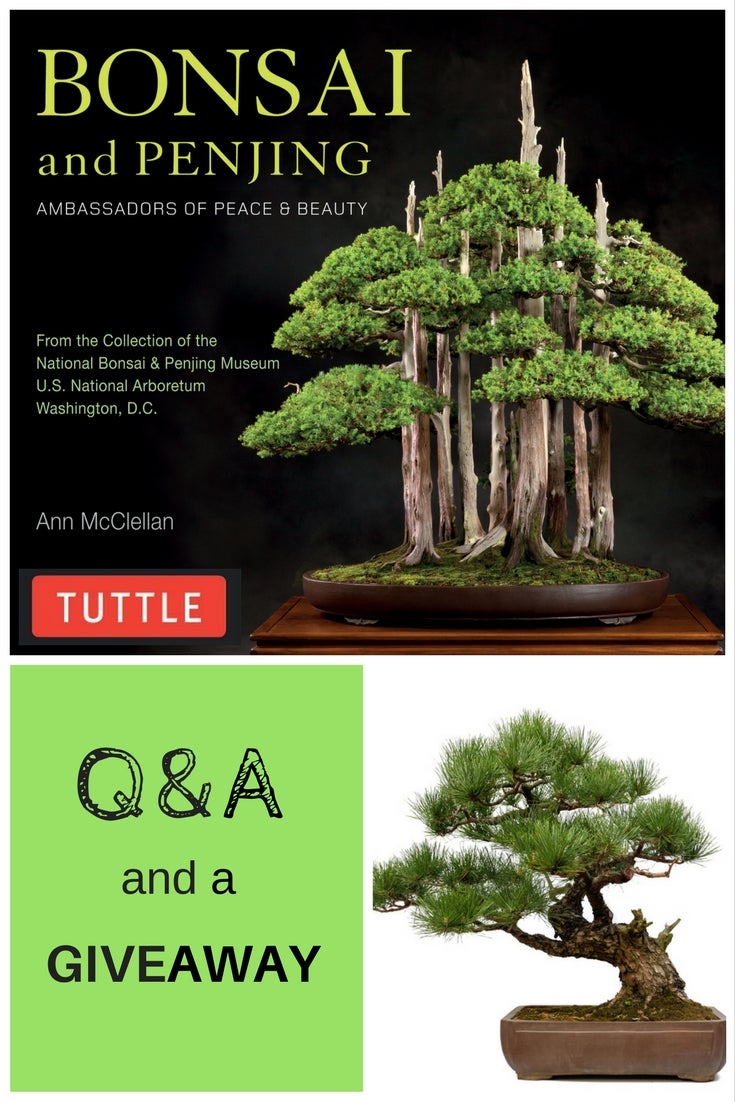 Ann McClellanÂ is delighted to addÂ Bonsai & Penjing, Ambassadors of Beauty and Peace, From the Collection of the National Bonsai & Penjing Museum U.S. National Arboretum Washington, D.C.Â to her previously published books about the flowering cherry trees of Washington, D.C.:Â Cherry BlossomsÂ andÂ The Cherry Blossom Festival, Sakura Celebration. All three books reflect the lifelong love of trees that she developed while growing up in New Jersey on an arboretum-like campus laid out by Frederick Law Olmsted. Her professional career has included executive positions at nonprofit organizations, such as the Smithsonian Institution, World Wildlife Fund, and the American Association of Museums. She treasures the living collections of the National Museum of Bonsai & Penjing as profound expressions of the best that people together with nature can create.

Read on to learn more about her latest Tuttle Publishing release, Bonsai & Penjing, and enter below to win one of five copies!

1. What intrigues you about bonsai and penjing?Â

To me, bonsai and penjing are tiny and sublime expressions of nature’s beauty. They are living works of art that create a world in miniature in which we can lose ourselves, presenting viewers with a new way to experience the mystery of all life. Now when I see trees or landscapes “in the wild,” they appear to me to be bonsai grown large.

It is amazing to remember that one person began to work with a tree or to create a forest planting””the moment referred to as “in training”””and that generations of people have cared for it for decades or even over centuries. While it is a goal of bonsai and penjing artists to create the illusion of antiquity in their works, it is the fact that many of the bonsai at the National Bonsai & Penjing Museum are truly ancient that astonishes me.

2.Â  Why is the National Bonsai & Penjing Museum worth the visit and how does your book help the reader to capture the spirit of the museum?Â

The collections on view at the National Bonsai & Penjing Museum are considered the most comprehensive in the world because they feature bonsai from Japan and North America as well as penjing from China. The bonsai and penjing are displayed in pavilions open to the sky because these are living works of art. While photographs can highlight what makes each bonsai or penjing special, the diminutive scale of each tree or forest planting is best experienced in person, where each tiny world and its magical qualities can be explored at eye level.

Another reason to visit the museum is that only about 75% of the museum’s 300 living works of art are on view at any given time. Plus, being live plants, the bonsai and penjing change throughout the year, just as full-sized trees do, so there is always something new to see.

The book captures the spirit of the museum by focusing on the most significant bonsai and penjing in the collections, telling their stories augmented with outstanding photographs, including several trees shown in different seasons. The book highlights many of the people who have had an impact on either the trees or on the museum itself, and it also provides some behind the scenes glimpses, showing what is involved in caring for these remarkable living works of art.

3. What criteria must a bonsai & penjing meet in order to be museum worthy?

The museum uses a range of criteria when considering a bonsai or penjing for inclusion in the national collections. They look for the highest quality and aesthetic appeal appropriate for a world-renowned collection, plus they seek diversity in plant material and in styles not represented in the collections already. They look for bonsai and penjing that are old in appearance; might in fact be old; evoke a scene in nature; and/or are the work of an esteemed bonsai master or are part of a notable collection. Whatever its merits, each living work of art that enters the museum’s collection must improve the quality of the museum overall.

The tree with the most fascinating story is the Yamaki pine, a Japanese White Pine (Pinus parviflora ‘Miyajima’), in training since 1625. It is the oldest tree at the museum, and it is named for the Yamaki family of bonsai masters who cared for it for centuries. It was part of the Bicentennial Gift of bonsai from Japan to the U.S. in 1976. While its great age was known upon its arrival in the U.S., it was not until much later that its most noteworthy feature was revealed””it survived the bombing of Hiroshima””leading to the creation of its nickname: The Peace Tree.

5. What are some interesting facts about the bonsai and penjing featured in the museum that you would like to share?

There were 53 bonsai that came from Japan as part of its Bicentennial Gift to the U.S. in 1976. There was one for each state plus three from the Imperial Household, including a Japanese Red Pine (Pinus densiflora) from Emperor Hirohito himself.

The museum’s collection includes viewing stones, where nature’s beauty in specific vignettes or in landscapes is evoked in found stones.

Each bonsai or penjing has one view intended by the original artist, though many are interesting when seen from the rear or even in the round.

6.Â  What does the future hold for the National Bonsai & Penjing Museum?

As the national collection of bonsai and penjing, the museum will continue to sustain and perfect its world-renowned status, setting the standard for the highest quality of these living works of art. The renewed Japanese Pavilion will open later this year, and plans are in place to revitalize the Chinese and North American Pavilions.

Tell us what you think: Leave a comment
8 people are already talking about this.
Printer Friendly Version
Read more about Gardening Experts
<PreviousNext>
Did you find this helpful? Share it with your friends!
FacebookTweetPinEmail