Q & A With Joann Moser, Author Of ‘Garden Builder’ 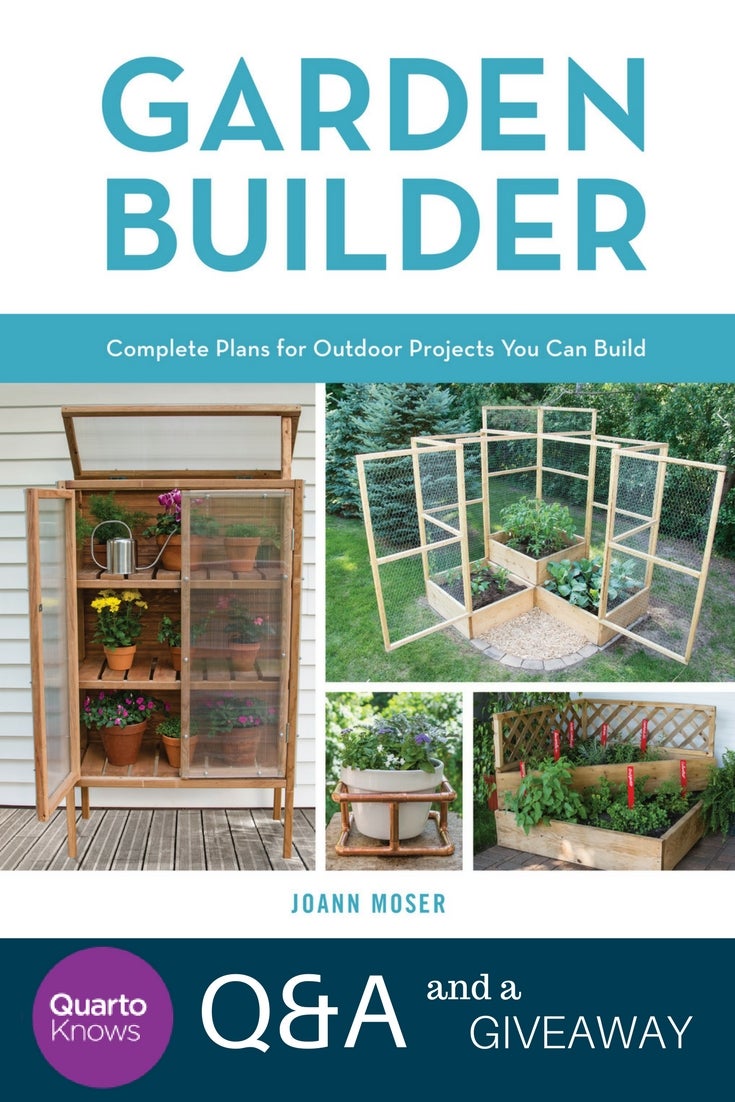 JoAnn Moser, writing as DIY Maven, is a featured contributor to the DIY website Curbly.com.Â  Her designs and writing were featured in four books: Make It! Secondhand Chic, Make It! Hardware Store Decor, and Make It! Mid-century Modern, all published by Curbly Publications, as well as I Love Handicraft, published by China Light Industry Press.Â  In addition to her not-so-secret crafting obsession, Moser is also an accomplished fiction writer. Her short stories have appeared in Alfred Hitchcock’s Mystery Magazine and Futures Mystery Anthology Magazine, among others. She resides in Eden Prairie, Minnesota, where she and her husband design and build wood furnishings in their spare time.

In her latest book, “Garden Builder“, JoAnn offers a treasure trove of lovely yard, patio, and garden projects you can build yourself!Â  Read on to learn more and enter to win one of two copies of this Quarto Group book.

1. I must admit I’m a bit mechanically challenged when it comes to home improvement projects.Â  What skill level does one need to complete the projects featured in your book?Â  What sort of budget should we have in mind for these projects? And, can most projects be completed in a weekend or less?

We tried to make the projects in such a way that any DIYer of any skill level could tackle them with ease. For instance, we made sure that each woodworking project could be completed with common woodworking tools such as hand drills and circular saws. We also saw fit that each could be constructed using simple glue and screwed, basic butt-joints. That doesn’t preclude more experienced woodworkers from using more specialized woodworking tools, like compound miter saws, table saws, drill presses and the like. More sophisticated joinery, such as mitered butt-joints, half-laps, mortise and tenon, and even simple pocket screws could also be used in construction as well, for those who have the knack and the equipment.

As far as budget goes, there’s something for everyone’s pocketbook. Some projects cost $20 dollars or less””and that’s only if you don’t happen to have any of the supplies on hand to make them. And, let’s be honest, MOST DIYers””including me have more than a few leftovers hiding around in the garage! As far as the bigger projects are concerned, the cost of completing them is really up to the individual makers, as they could be made with a variety of wood species, from inexpensive pine to cedar (for the more utilitarian projects) to mahogany (for the more decorative projects).

The majority of the projects in Garden Builder can definitely be made in a weekend. Some will take only a few hours with downtime in between steps letting glue or concrete cure, so although they might be completed over a weekend, they certainly won’t use up the weekend!

2. You mention that your book, the “Garden Builder” consists of a little of everything.Â  What sort of projects can readers expect to find between the covers?

You’ll be able to find purely ornamental garden objects to utilitarian things that you didn’t know you needed! Seriously, though, we’ve broken down the book into four parts including Decorative Elements, Small Projects, Planters & Accessories and Large Projects. The first three collections include those weekend projects I mentioned earlier. They include a copper trellis, a faux rock cairn, a garden obelisk, a child’s gardening bench, a collapsible grow box/seed-starter, and infinity planter among many others. The last collection, the Large Projects include a cabinet greenhouse, a pergola awning with integrated lighting, a modular critter-proof vegetable garden and a water barrel tower, to name just a few!

3. What inspired you to write this book and what was your inspiration for the projects featured within?

I wanted to put together a collection of projects that any DIYer of any skill level could handle. As for the projects themselves, the prerequisite of them making the cut was simple: they had to enhance one’s time spent in the garden and one’s gardening experience as well. From the actual gardening part to the enjoying the fruits of our labor part and everything in between.

4. What is your favorite project from the book and why?Â

This is really a hard question to answer because I honestly didn’t include anything in the book that I didn’t love. (And, yes, there were some fails along the way that I THOUGHT were going to be awesome. Nope. Not so much.) But be that as it may, I kind of adore the Faux Rock Cairn. Besides it looking really cool, it reminds me of Lake Superior where intrepid souls construct such things along the lake’s north shore. The Cabinet Greenhouse is another favorite, as I’ve always wanted a greenhouse. Oh, and the Water Barrel Tower. I LOVE that thing! No more lugging a hose or buckets to the vegetable garden!

5. Your husband was your DIY partner in crime for the creation of this book. Was this your first professional collaborative effort together and will you be joining forces again on another book? Â

He lent a teeny bit of his expertise while I was working on my book Mason Jar Nation, but, yes, this was our first collaborative effort. (Neither of us could have done it without the other.) I would LOVE to work on another book with him! I’ve actually been kicking around the idea of doing something with miniature garden construction. How does that sound?

Tell us what you think: Leave a comment
15 people are already talking about this.
Printer Friendly Version
Read more about Gardening Experts
<PreviousNext>
Did you find this helpful? Share it with your friends!
FacebookTweetPinEmail