Q & A with Laura Ten Eyck and Dietrich Gehring, authors of The Hop Grower’s Handbook 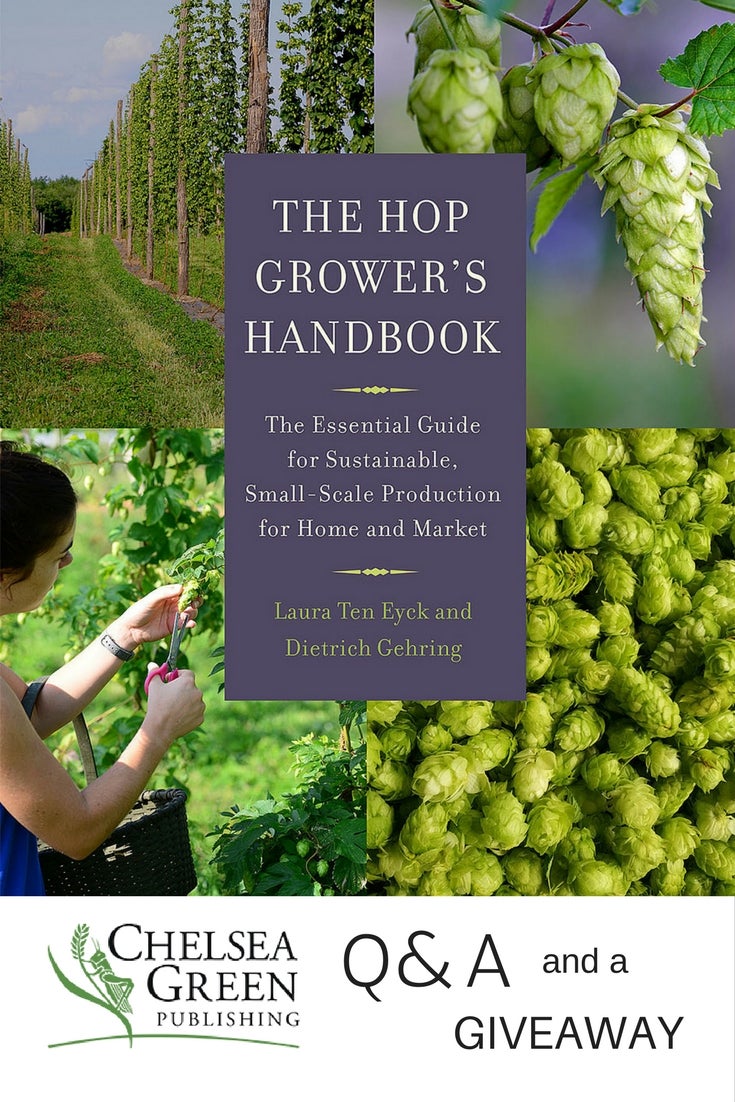 Laura Ten Eyck owns and operates Helderberg Hop Farm and Indian Ladder Farmstead Brewery and Cidery with her husband, Dietrich Gehring. The two have been growing hops and brewing beer at home for more than twenty-five years and have been working to restore local hop production in the northeast.  Ten Eyck is also senior manager of New York Outreach and Projects at American Farmland Trust, a nonprofit where she advocates for national and regional farmland conservation, and was previously a freelance journalist.

Dietrich Gehring is a small-scale commercial hop grower, professional photographer, home brewer, and co-owner, with Laura Ten Eyck, of Helderberg Hop Farm and Indian Ladder Farmstead Brewery and Cidery. He is a photographer of agricultural and natural landscapes, selling his work through galleries and to individuals. His work has been published in numerous magazines and can be viewed online at www.dietrichgehring.com. Gehring’s long love of hops and brewing began decades ago, when he was sales manager for Newman’s Albany Brewing Company, one of the first craft breweries in the United States. It was here that he learned how to brew beer and market it locally. He has worked in Boston, Massachusetts, and New York’s Capital Region selling high-end imported and domestic beers, as well as in specialty stores in the Boston area offering a wide selection of craft beer.

Their collaborative effort, The Hop Grower’s Handbook, provides helpful information on siting, planting, tending, harvesting, processing, and brewing of hops.  Read on to learn more and enter below to win a copy from Chelsea Green Publishing.

Although we are farmers, we originally got into growing hops as a hobby because we were very interested in craft beers and home brewing. Hops are a fascinating plant used to provide bitterness and aroma in beer. Hops also have many medicinal uses including promoting sleep and functioning as an antibacterial. A perennial bine hops, when provided with a supporting structure hops, will climb 20 feet or more, producing an abundance of fragrant bright green flowers called hop cones. In 2012, New York State passed the Farm Brewery Law allowing farms to be licensed to brew beer provided that they used a certain percentage of hops and barely grown in New York State. At that point we saw an opportunity to grow hops to sell to breweries so we made the transition from hobbyists to small-scale commercial hop growing.

2. What are some great features of this book that readers will find invaluable as they embark on their hop growing enterprises?

Like us, many people become interested in growing hops because they love beer. We had the advantage of already being farmers but many people who want to grow hops do not have an agricultural background. One really helpful thing about our book is that we assume the reader knows little to nothing about agriculture so we explain basic sound agricultural practices such as soil health and cover cropping along with information specific to hops. We go out of our way to describe processes and concepts in clear, simple language that is easy for a layperson to understand.

The vast majority of commercial hop production in the United States takes place on very large hop yards in the Northwest that are hundreds or even thousands of acres in size. Our book covers hop growing at a small, sustainable scale ranging from a garden plant to a few plants for home brewing to small, scale commercial hop yards a quarter-acre to a single acre in size. In addition to providing information about growing hops and installing a trellis system, our book includes information on small-scale hop picking as well as drying, processing, and storing, which are critical to having good quality hops for making beer.

3. I have some friends who are hesitant to get into hop growing for fear that the craft beer market is getting saturated.  Is this a valid concern?

We feel that the tremendous success of the craft beer industry definitely increases competition among brewers to make their products stand out from the rest. This is actually good for the small-scale hop grower using sustainable practices. In general, brewers purchase nearly all their hops from large Northwestern hop yards. Purchasing from local, sustainable hop yards gives brewers a way to differentiate their product from the competition.

4. How much does it cost to grow hops by the acre and, in a good year, what profit margin can be made?  How many acres of hops need to be grown for a commercial enterprise?

There are so many variables when it comes to growing hops on a small scale. A basic rule of thumb is that it costs approximately $15,000 to install the infrastructure of a one-acre hop yard, including poles, cable, hardware, and irrigation. Recouping on the investment takes time as hop bines take three years to reach maturity. Ultimately, the total annual yield per acre should be between 1,800 and 2,200 pounds. Here in New York State, due to the learning curve as well as pest and disease issues, we have yet to achieve these yields. Dried hops sell for between $3 and $28 a pound. It is important to keep in mind that many of the higher priced hop varieties are proprietary and can only be grown by the growers that invested in their development.

5. For those gardeners wanting to grow just enough hops for their home brewing, how many plants would you recommend?

A single mature hop bine will produce about 4 pounds of dried hop cones, which is plenty for a home brewer. However, home brewers are quite likely to want to experiment with more than one variety, so we would recommend growing between three and five plants.

6. Is it difficult to grow hops organically?

It is very possible to grow hops organically but there are some particular challenges. One example is that hops require a tremendous amount of nitrogen. For a commercially viable crop, very specific amounts of nitrogen have to be made available to the plant at certain times during the growing season. When using organic fertilizer like manure tea or fish emulsion, it is difficult to know with precision how much nitrogen will be available to the plant at a given point in time. Organic growers also face challenges in dealing with fungal disease. For example, hops are highly susceptible to down mildew. To produce a commercially viable crop it is necessary to have an established fungicide spray program to prevent downy mildew from taking hold and destroying the crop. Downy mildew is very adaptable and quickly develops resistance to any one fungicide if it is used repeatedly, so it is important to rotate fungicides regularly. There are fungicides that are approved for use on organic farms, but access to them depends on what state you live in. In order to use a pesticide legally it must be labeled for use in the state in which you live on the particular crop it will be applied to. Because there is not yet a commercial hop growing industry in very many states outside of the Northwest, manufacturers of fungicides have not invested in meeting labeling requirements in many states. As a result there are very few fungicides, approved for use on hops, available to growers in states outside of the Northwest, let alone fungicides approved for use on organic farms. This makes it very difficult to provide adequate rotation of fungicide used to control downy mildew.

Tell us what you think: Leave a comment
6 people are already talking about this.
Printer Friendly Version
Read more about Gardening Experts
<PreviousNext>
Did you find this helpful? Share it with your friends!
FacebookTweetPinEmail