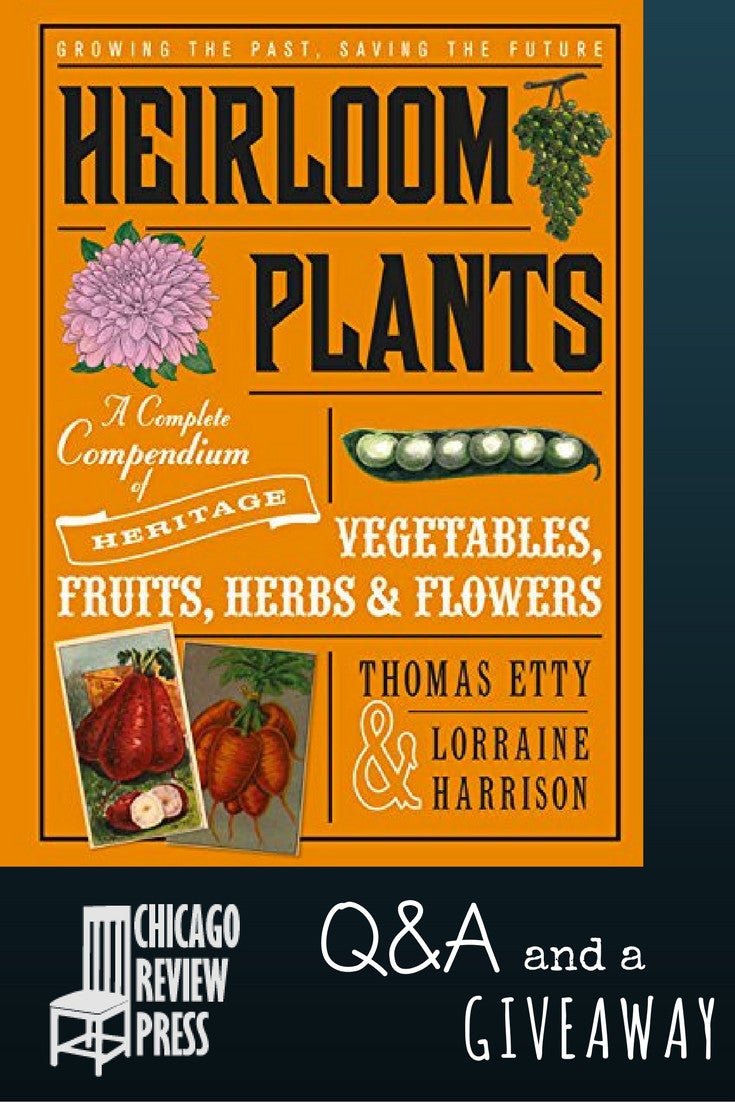 This week’s Sunday read is Heirloom Plants: A Complete Compendium of Heritage Vegetables, Fruits, Herbs & Flowers from Chicago Review Press.  Learn more about this new release from co-author Ray Warner and enter to win a copy!

1. How did heirloom seeds became a part of your life story?

I have previously worked in banking, insurance and the Civil Service, but always had more interest in gardens and gardening than in the job I was doing.  When I was inevitably made redundant, I took the opportunity to try to make a living from that interest, and spent some years as a jobbing gardener before piecing together the information and know how to launch and run my own seed company.

When I was looking for a name for my fledgling heirloom seed company some 20 years ago, (having decided that Ray Warner Heritage Seedsman was not inspiring), my Mother mentioned that her great-grandfather, Thomas Etty, had worked in a hardware shop in York, in the mid 19th century, and grasping at the fact that hardware shops usually sold seeds, I settled on the name Thomas Etty Esquire.

It is interesting, that over the years, a whole mythology has grown up around Mr Thomas (none of which we have never gainsayed). People have told us that they knew him back in the 1950’s and 60’s or that they remember their parents always bought their seeds from him.

We now say that Mr Etty was born in 1837 so he does not get out much these days, and being profoundly deaf cannot answer the phone himself (although he does reply to emails in fluent Victorian). Mr Etty’s Emporium is now run by his great-great-grandson (me) and my son (Dan) – although we constantly seek Mr Etty’s advice and opinions on all matters.

2. What is the allure of heirloom plants for you personally?

I like the history behind them, and also the fact that plant breeders in the past were more concerned about flavor and length of cropping in the varieties they bred than seems to be the case nowadays, when the emphasis seems to be more on volume returns and size. They also, somehow, managed to breed plants that could cope with different soil types and depths, so, for instance, we now have round carrots that grow in shallow soils; sadly though the round parsnip now appears to be lost to cultivation.

3. Why is it important that we grow heritage plants?

Because it guarantees that we will always have an extensive gene pool to draw from, which would not be the case if they were all replaced with modern varieties, plus, as stated above, more traditional varieties will usually crop over an extended period, which is what most home veg growers want. The same is often true of heritage flower varieties; especially true of the Victorian, or Grandiflora Sweet Peas which, despite having a smaller flower have a more intense perfume than many of the modern types.

4. Of the 500 heritage cultivars featured in your book, what are some of your favorites and why?

That’s a bit like asking me which is my favorite child!, there are many, but one or two do stand out, I like the unusual, so black carrots, and white ones for that matter, usually get a conversation going, with people asking what they taste of. The answer is always the same “they taste of carrots”, which then leads on to me explaining that carrots originally were all purple or white and that we owe the red carrot to Dutch hybridisers.

Other favorites include the Spotted or bloody cos lettuce which often has people refusing to eat them as they think that the red stripes and blotches “must mean that it is somehow diseased.”

If pressed for a favorite, I would probably have to go for the Nun’s Bellybutton bean, or the Soldier bean as in think it is known in your neck of the woods. People are intrigued by the “angel” that appears on the bean where it attaches to the pod; interestingly I posted a picture of one on twitter last week and someone got back to say it  that the image remind them of a Klingon Bird of Prey spaceship, so clearly we must think about bringing the name up to date.

5. How does this book help the gardener who’s interested in preserving heirloom cultivars?  What are some features in your book that readers will find most useful?

I hope that it enthuses gardeners to grow and thus preserve these old lines. We get seed orders from many stately homes and National Trust properties here in the UK where the gardens of the attractions are preserved for a specific period in time. From our research we are able to pinpoint introduction dates (or “in use  from dates”),  this helps to produce period correct planting lists that ensure that the planting is authentic to the period. A lot of trouble is taken to make sure that interior of these properties is as authentic as it can be, by using period plants it is possible to make sure the gardens look the same.

6. What advice and/or tips do you have for the first time heirloom plant gardener?

Always grow what you like! I am often asked at events we attend, “what should I grow in my garden” and the reply is always,“what do you like to eat”, or “what are your favorite flowers – grow them”, that is a start point, but I can then point out that within their favorites there are a whole range of sizes, shapes and colors. IF you like Tomatoes, grow some different colors to the usual red (see comments above for carrots) “They taste like Tomatoes” – If you grow Kale experiment with the many types, often, in a good year you can crop this useful plant all year round, the same with the various types of leaf beet or chard.

Heirloom flowers also have a charm of their own, often the flowers are smaller and perhaps less brightly colored than their modern counterparts, but they can provide a gentle subtleness that is often missing when using these modern hybrid varieties.

7. How did Thomas Etty help pioneer the heirloom seed movement and how is his legacy being carried on today?

Mr Etty’s current emporium grew out of a interest to discover the origin of some of the more interestingly named varieties listed in seed catalogues. At the time, I wrote to the major seed companies here in the UK and asked if they had any information about these varieties, and the responses I received were quite interesting; some provided accurate information, but one said they were all modern and came over from Holland in the 1950’s.

When I asked at the RHS Library in London for books on the origins of varieties, I was told that there were none, this started the quest, the culmination of which is “Heirloom Plants”.

Since we started to highlight these old varieties, there seems to be more interest in older varieties and competitors are also listing heirloom vegetables and flowers, needless to say Mr Etty’s catalogue has the most detail and, we think, lists the most varieties.

The research that culminated in the book is ongoing and we are always discovering “new” heirloom varieties, currently concentrating on flowering plants., we have just added over 70 new varieties to our catalogue.

Tell us what you think: Leave a comment
9 people are already talking about this.
Printer Friendly Version
Read more about Gardening Experts
<PreviousNext>
Did you find this helpful? Share it with your friends!
FacebookTweetPinEmail