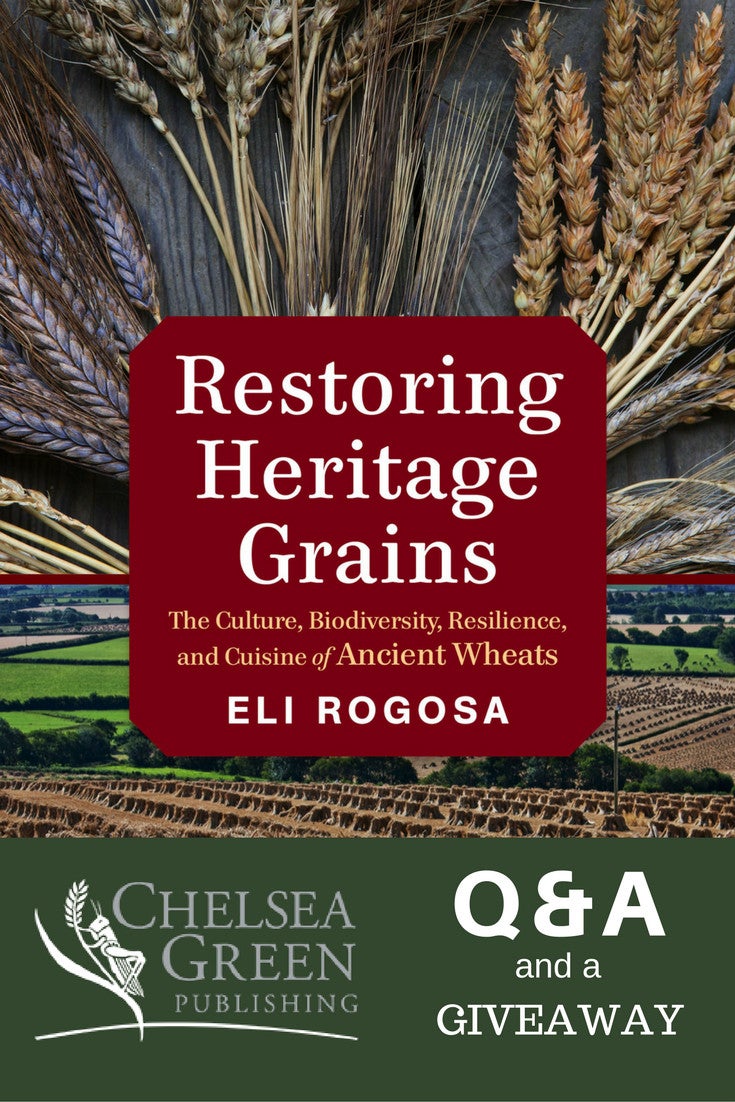 When Eli Rogosa worked with traditional farmers in the Fertile Crescent, she discovered a treasure of robust heritage wheat growing in the stifling heat and drought without chemical intervention, but realized that landrace wheats are on the verge of extinction, not only in the Fertile Crescent but Europe as well. Rogosa established the Heritage Grain Conservancy to preserve rare landrace wheats to ensure that future generations have access to the biodiversity that is disappearing around the world in the face of industrial agriculture. Her latest book “Restoring Heritage Grains” combines the history of grain growing and society, in-depth practical advice on landrace wheat husbandry, wheat folk traditions and mythology, and guidelines for the Neolithic diet with traditional recipes for rustic bread, pastry and beer.  Read on for more information about this book and enter to win a copy from Chelsea Green Publishing!

Q: How did you become interested and involved with heritage grains?

A: When I worked in the Mideast as an agriculture extension trainer for traditional Palestinian and Israeli farmers I observed that the indigenous landrace crops performed better than the modern cultivars under the local harsh weather, and wanted to learn why. Also, I was hiking in northern Israel in the Galilee and found wild wheat growing on the field edges. It was so robust and beautiful. I fell in love with landraces, the women bakers, and the traditional farmers that grew them.

Q: I will admit to being unfamiliar with the term “landrace” before reading your book.  For the benefit of our readers – what does that term mean in its relation to wheat?

A: The concept of landrace means ‘of the land’.  A landrace is not one plant but a race, a population that emerged from wild plants, that has evolved over generations, over millennia, to be well adapted to ancestral lands. Landraces are a living expression of a plant population’s evolutionary and adaptive history of species interaction within its environment and the human culture that shapes it. A landrace not only describes the food crop itself but also encompasses the polyculture farming systems of pre-industrial farmers. Traditional farmers grew mixtures, never a single ‘heirloom’ variety. Landraces embody relationships. They are part of a dynamic seed system with humans who select and exchange seed. Traditional farmers exchanged seed with neighbors who had different soils, water, and farming environments, maintaining and enhancing the populations’ biodiversity. A landrace encompasses the social system of seed-saving: the bakers, brewers, and seed-savers who select for their local landrace cuisine.  A landrace can only thrive within a community of seed savers.

Landraces bear a Noah’s Ark of wild resiliencies, diverse adaptable traits and social values that enable them and us to survive the storms and droughts of weather extremes and social challenges, just as landraces and traditional farmers have survived millennia of natural climate change in the past.

Q: Why are the robust and diverse wheats, the heritage “landrace” wheats, which nourished our ancestors for thousands of years, extinct today?

A: Corporate greed has taken control of our seed, and bred cultivars with dependence on agrochemicals and pesticides to survive. We have been conned by the industrial seed companies to buy their products, the modern seed and their agrochemicals. In the same way as chemical fertilizers were marketed as the modern replacement for compost and green manures, modern cultivars are marketed to replace locally-adapted landraces. Mass produced breads are baked with rapid-rise yeasts and kneaded with rigorous mixing to produced fluffy white breads. The bubbles in the dough need high gluten to maintain the fluff. Modern wheats are bred with high (albeit indigestible) gluten.

Q:  How do heritage wheats different from modern varieties and why is it important that we restore these heritage grains?

Today’s wheat is no longer nourishing us. It is an empty harvest bloated with nitrate chemicals, causing an epidemic of obesity and ill health. Modern breeding has been so successful in achieving its goal of covering the world with uniform ‘green revolution’ varieties that the heritage wheats that were once grown by traditional farmers worldwide are disappearing. Heritage wheats are just starting to be in production in the US, and minimally available for organic farmers. The unprecedented erosion of wheat biodiversity has resulted in fewer varieties, limiting food security, nutrition, and culinary art.

Landrace wheats tend to be higher in nutrition than modern wheats, and have a richer complex flavor that deeply satisfies. For example, einkorn is among the highest in protein and minerals of all small grains. People call my sourdough einkorn bread ‘skinny bread’ because if they eat a slice of this bread, they are satisfied for longer, and do not get food cravings. There a lower glycemic index that maintains a more steady longer-term release of energy.

Landrace wheats are planted at wider spacing than modern wheat yet yield higher due to extensive tillering (many stalks) and strong root systems that reach out to organic soil nutrients. Their deep roots reach the moisture at lower soil levels.  We recommend to plant not closer than 8 inches between each seed, or between 12 to 15 lbs per acre. When planted at wide spacing in organic soils, landrace wheats’ strong root system grounds the plant during heavy rains and enables the plant to survive under hard droughts and heat.  Landrace wheats have complex natural buffering mechanisms that evolved over millennia to survive adversity.

Q: How (and why) is modern wheat making us sick?

A: If you immerse bread dough under running water, the starchy flour will wash away and leave a sticky elastic glob of gluten. Gluten is the protein-rich molecular bond that transforms a mixture of flour and water into an elastic, responsive dough. As dough rises from the air bubbles breathed out by yeast microorganisms, gluten holds the dough together, giving bread its shape and fluffy crumb texture. Gluten is formed in the grain kernel from the nitrogen that a plant absorbs from the soil.

The alarming rise in gluten allergies can be attributed to three inter-connected factors:

Q: How can our readers help your movement to restore heritage grains?

A: ‘Eat it to save it’ –
It is easy to grow heritage wheat. Grow and save the seeds of heritage wheats in your backyard garden, landscape your lawn borders with them, or trial them on your farm. Ask your local artisan baker for heritage wheat bread. Save and share your healthiest seeds with your friends. Start a seed exchange. Buy heritage wheat in bulk and mill it fresh to bake bread. Have a baking party with your friends. Talk to people about how you want to reclaim you local food and seed system. Go to conferences. Resist the corporate food system. Celebrate and buy from local farmers. Plant a seed.

Q:  What are the ramifications if we do not succeed in restoring heritage grains?

A: Wheat scarcity, rising food prices, and unrest in vulnerable regions –
Today, genetic management has shifted to the hands of industrial breeders who have replaced landraces worldwide with patented commercial varieties bred for uniformity in agrochemical-soaked fields. Modern wheats’ narrow genetic base leaves them vulnerable to disease and lacking adaptability to the weather extremes of drought and heavy rain. Global warming looms menacingly. Industrial wheat, the most widely grown crop on the planet, is a teetering mono-crop fine-tuned for predictable weather in computer-controlled mega-farms, dwarfed for efficient harvest by goliath combines and dependent on irrigation, pesticides, and synthetic fertilizers to survive. It is bred like a pedigreed inbred racehorse for high performance in optimal conditions but weak under adversity. Just as a mono-crop of potatoes was wiped out in Ireland by a strain of blight in 1845, the uniformity of modern wheats is a disaster waiting to happen.

Tell us what you think: Leave a comment
7 people are already talking about this.
Printer Friendly Version
Read more about Gardening Experts
<PreviousNext>
Did you find this helpful? Share it with your friends!
FacebookTweetPinEmail