Q&A with Joy Larkcom, author of The Salad Garden 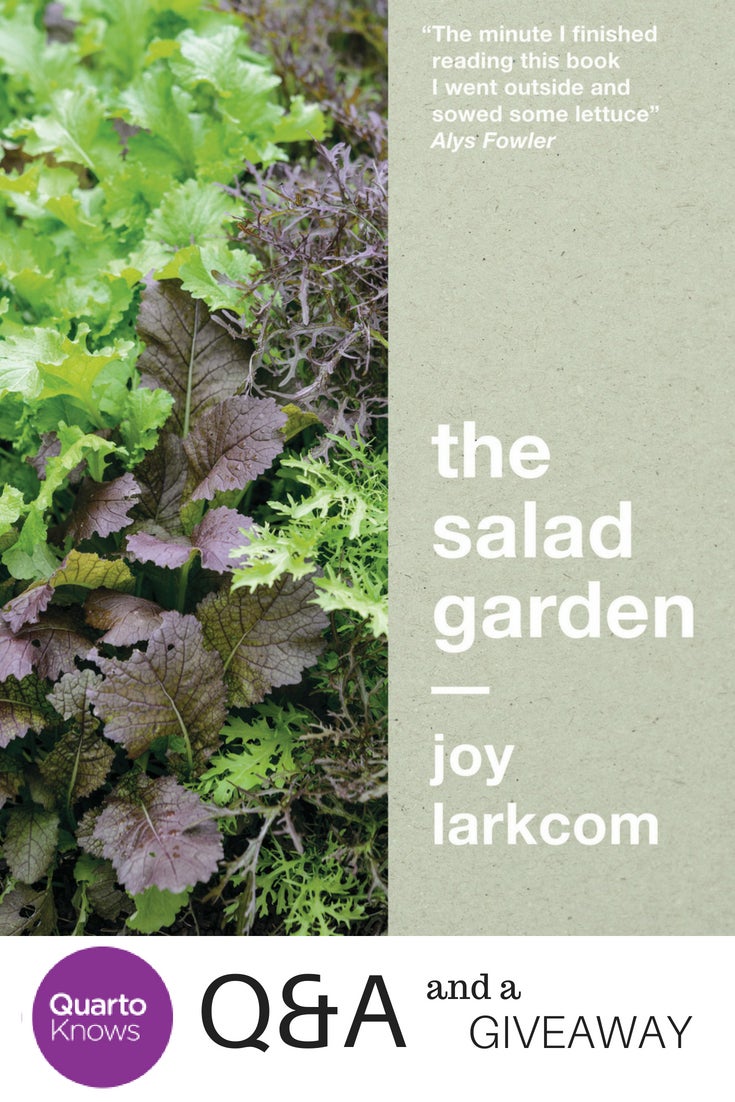 Joy Larkcom is one of Britain’s most respected vegetable garden makers and gardening writers. She has contributed to many magazines and newspapers, radio and TV programs and has lectured all over the world. Her accolades include the Garden Writer of the Year award (three times); Lifetime Achievement Award from the Garden Writers’ Guild in 2003, and the Veitch Memorial Medal for horticulture, the RHS’s highest honor, in 1993. She was chosen as one of photographer Nancy Honey’s 100 Leading Ladies – a project exhibiting some of the most influential women in Britain. Her previous work includes Oriental Vegetables, Grow Your Own Vegetables, and The Organic Salad Garden.Â  In her latest release, The Salad Garden, Joy offers a comprehensive guide to growing more than 200 salad plants.Â  Read on to learn more and enter below to win a copy from Quarto Press!

1. How did salad gardening become your passion?

Salad growing really took over my life in the late 70’s, when my late husband, Don Pollard and I returned from what we always called our Grand Vegetable Tour. This was a year’s research trip traveling in Europe in a van and caravan with our two young children, then aged 5 and 7. Our purpose was to study vegetable growing, Â and to collect the seed of heritage vegetable varieties which were in danger of dying out and being lost for ever.Â  What we found, above all, were hosts of salad plants which were still being cultivated in Europe, but were no longer grown in the British Isles – chicories, endives, salad rocket to name a few – and different, intensive methods of cultivation, most notable the use of ‘cut and come again’ to grow tasty young seedlings for use in salads.

We also learnt so much about gathering edible wild salad plants, Â about blending salad leaves together into wonderful mixtures, about the use of edible flowers and techniques like blanching to make vegetables more tender.Â  When we returned from our year’s travels we had to make a living, and started growing and marketing salads. Our main enterprise was selling mixed packs, Â which we called ‘Saladini’ , to one of the first wholefood shops in London. At the same time I started writing about these salad plants and all we had learnt about growing them, which became my first book onÂ  salads, ‘Salads the Year Round’ Â which was published in 1980. This little paperback later became the beautifully illustrated ‘Salad Garden’. Over the years it has been revised and updated,Â  in keeping with changing tastes and developments and the results of our own experiments and trials .Â  This most recent edition includes today’s interest in the tiny seedlings known as micro-greens.

2. When it comes to salad, most people’s thoughts turn to tomatoes and lettuce.Â  However, your book opens up a wealth of possibilities.Â  How many salad plants does your book feature and what are some interesting plants that can be grown for salads that can be found in your book?

Probably between 300 and 400 plants are covered in the book.Â  When we had our market garden in EnglandÂ  ( we later retired to the west of Ireland) we reckoned we had about 100 plants at any one time which we could put into our salad packs. A lot of these would be salad herbsÂ  or edible flowers – but the choice is enormous.Â  Besides the classic salad plants which are eaten raw – lettuce, tomato, cucumbers, leafy greens many vegetables can be incorporated into salads cooked and cold. Potatoes , broad and French beans are favorites. .

When it comes to recommending interesting plants, I would say it depends on what you are looking for.

If it’s sweetness, the ‘sugar peas’ or ‘snap peas’ are delicious. I’ve noticed how fast they disappear when visitors wander through the garden. Â Just tweaked off and eaten raw! There’s wonderful fresh subtlety too in peas shoots and pea tendrils.

For a bit of a kick, the milder chili peppers are superbly flavored, while the young leaves of oriental mustards and the ever popular salad rocket have a real bite”¦ as do sorrel leaves and most radishes.

Crunchiness? Try Florence fennel, stem lettuce, radishes, and force your own Witloof chicory to get crisp white chicons in the winter months, It will taste far better than any you buy in a store.

If its eye catching texture you want grow the crenellated leaves of Tuscan kale, iceplant ( Mesembryanthemum crystallinum) with its sparkling, crystal like bladders on its leaves, feathery fennel leaves

There’s a Year Round Saladini Chart in ‘Salad Garden’ which suggests salad plants with some of these characteristics, to grow so you can put together a diverse salad for much of the year”¦. depending, of course, son your climate.

3. How does this book help us to be an exceptional salad gardener?

While the book covers all the basic gardening techniques that apply to growing vegetables and flowers – building up soil fertility, raising plants, watering and weeding, it expands on techniques which play a significant role in salad growing.

The key ones here would be:

These densely sown drills and patches produce delicious young leafy crops which can be cut once, twice, sometimes three times.Â  They make optimum, use of space.. Â A ‘cut-and-come-again’ chart lists nearly 30 plants, indicating sowing times,Â  how fast they germinate, the number of cuts, how long they will stand. Â Clever use of CCA is also the gateway to creating intriguing patterns in the kitchen plot, interweaving different colors and textures to make it not only productive, but a beautiful feature in its own right.

CCA can also be used on mature plants, such as endives, the Chinese greens, Florence fennel, too prolong the salad season. If left in the ground rather than being uprooted after their first cut, they will continue growing, Â often providing salads when they are at their scarcest.

* growing in containers and hanging baskets

This is a necessity for so many would-be gardeners today. Quick maturingÂ  salad plants are tailor made for containers ( CCA seedlings above all) but so many are decorative in themselves and happily grow in containers”¦sweet and chili peppers, dwarf tomatoes for example. Â Throughout the book varieties suitable for containers are recommended.

Sprouting seeds is one of the oldest of gardening skills – a rich source of nutrients – while micro-greens or micro-leaves, which are grow to a slightly later stage, have swept the salad world by storm.Â  Both lend themselves to salad lovers limited to small spaces, and are especially prized in the off season months

In cool climates the tradition of blanching naturally bitter salad crops, such as endives, dandelion , chicories, Â celery, makes them paler, sweeter and more palatable . It increases the range of salad in the winter months

* the use of plastic covers and forms of shelter

For salad gardeners in cool and extreme climates, the shelter from plastic covered polytunnels/hoop houses, cold frames and Â low tunnels are key tools. They enable the salad season to be extended by months, Â both at the start and end of the season.Â  Equally important, they allow salad plants to remain tender, when, if grown outside without protection, exposure to the elements would make the leaves tough and coarse. And who wants tough salad leaves?

4. For those new to gardening the salad choices can be overwhelming.Â  What are your suggestions for novice gardeners?

Until you get the feel of gardening, I would ‘start small’ both in the amount of ground you are cultivating, and the choice of salad plants. Start with something you really like yourself and equally important, something the household appreciates. Nothing is more depressing for the novice gardener than to find no-one is eating what they have grown. And it happens. Every year , as your confidence and expertise grows, extend your range to try a few more things. It’s a life time’s journey. I’ve only just discovered that yacon tubers are lovely raw in salad> And I didn’t even include it in ”The Salad Garden’!

If I was setting out today “¦

I would start in spring with Â one green variety of lettuce, my favorite ‘Little Gem’ and one loose leaved red variety, a red ‘ Salad Bowl’

Throughout the growing season I would concentrate simply on sowing drills, patches or even seed trays/flats of the CCA salad mixtures which so many seed companies now offer. Â Some are just mixtures of different lettuces, some are mixtures of oriental greens, some are mixtures of a range of salad plants and herbs.Â  Sow them little and often. As soon as one lot is through the soil, sow the next.Â  This way you will not only have something fresh to pick all year round, but you will get to know some of the many salad plants which are available.

I would also grow nasturtiums, pot marigolds and the ‘Gem’ marigolds and borage to brighten the salads with their petals and quiet flavors.

I would also plant both ordinary chives and garlic chives as permanent edges for one or two of the beds. Their onion and garlic flavored leaves add such distinctive touches to a salad, as do their colorful, edible Â flowers.

I’d be tempted to try my hand at basil and coriander, two of my favorite herbs for salads. Both are easily grown in pots.Â  Coriander is much easier than it sounds; basil loves warmth and can be trickier in cold climates.

As a ‘last word’ I would recommend any novice gardener, from the very start, to make notes of what you have sown and planted and the results.Â  This will become the most valuable piece of information on which to base your future plans. Â It will be based on your unique growing conditions, and the unique demands of your household. Â And however much advice you get from books and other sources, nothing can match your own observations and experiences.Â  Even now, after growing salads for over half a century, I turn to the previous year’s records constantly for guidance on what to do.

Tell us what you think: Leave a comment
9 people are already talking about this.
Printer Friendly Version
Read more about Gardening Experts
<PreviousNext>
Did you find this helpful? Share it with your friends!
FacebookTweetPinEmail