Q&A with Zahid Sardar, Author of “In & Out of Paris: Gardens of Secret Delights” 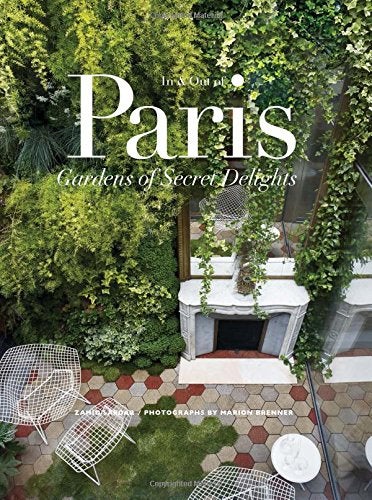 Zahid Sardar is the author and contributor to eight design books including New Garden Design, West Coast Modern and In & Out of Paris: Gardens of Secret Delights. The exhibition he curated, Hands Off: New Dutch Design at the Confluence of Technology and Craft opened at the Museum of Craft and Design in San Francisco and traveled to Dutch Design Week in Eindhoven, The Netherlands, during 2015. He was the design editor of the San Francisco Chronicle for 22 years, writes for Dwell, Interiors and San Francisco magazines among many other national and international publications and is the Editor-in-Chief of Marin At Home magazine that launches in January 2016.

Read on for more information about Zahid’s latest book, “In & Out of Paris: Gardens of Secret Delights” and find out how to win a copy from Gibbs-Smith Publisher!

1.Â Â Â  Of all the gardens you visited in and out of Paris, which was your favorite and why?

Oddly, the garden by American architect Michael Herrman which we photographed first and which coincidentally also provided us with a stunning cover image, is my favorite because it enmeshes old and new garden techniques, and alludes to a surreal garden Le Corbusier designed during the early 20th century for the bon vivant, Charles Beistegui. Herrman’s contemporary version of that garden also echoes design aspects he explored while working with contemporary architect Jean Nouvel on prominent projects that incorporated living green walls by botanist-designer Patrick Blanc. Â Blanc’s own home is also featured in In & Out of Paris.Â  Â Â

2.Â Â Â  What sets Parisian gardens apart from all the rest?Â  What is their allure?

Parisian gardens have to rely on hardscape structures that can withstand harsh winters and their often beautiful configurations contrast with Mediterranean gardens “” that inspired the first Parisian gardens “” which often remain evergreen and verdant even during the coldest months and have less need for hardscapes.

3.Â Â Â  Sculpture has been a part of Parisian gardens for centuries.Â  What are some of the best uses of sculpture you encountered in a Parisian garden?

The use of allegorical and monumental sculptures in Parisian gardens has Greek, Roman and even Egyptian precedents and many gardens in Paris have original works from antiquity within their walls. However, for me, the follies in Meudon by mid-century artist and architect André Bloc that are shown in the book, are the most arresting, sculptural forms I encountered. Because they are actually expressionistic brick buildings that are composed of African mask-like forms, they can be enjoyed from a distance, entered and climbed.Â

4.Â Â Â  How can we bring the essence of Paris into our garden at home?

That is a long and difficult list to make, but in short I would say that there were many rules of perspective that the landscape designer André Le Notre deployed at Versailles and other famous royal gardens that anyone can also use at home even in small gardens. There are several gardens by landscape architects Christian Fournet and Hugues Peuvergne in the book that are good examples.

5.Â Â Â  As you compiled information for this book did you notice any common threads in each of the gardens you visited?

That is perhaps one of the goals and successes of the book: It shows that Parisian gardens can be dramatically different from each other, explore new ground and present fresh perspectives on garden design even when they echo Classical lessons.

UPDATE 1/3/2016: Congratulations to Daniel Morrell, the winner of the In & Out of Paris book giveaway!

Tell us what you think: Leave a comment
24 people are already talking about this.
Printer Friendly Version
Read more about Gardening Experts
<PreviousNext>
Did you find this helpful? Share it with your friends!
FacebookTweetPinEmail