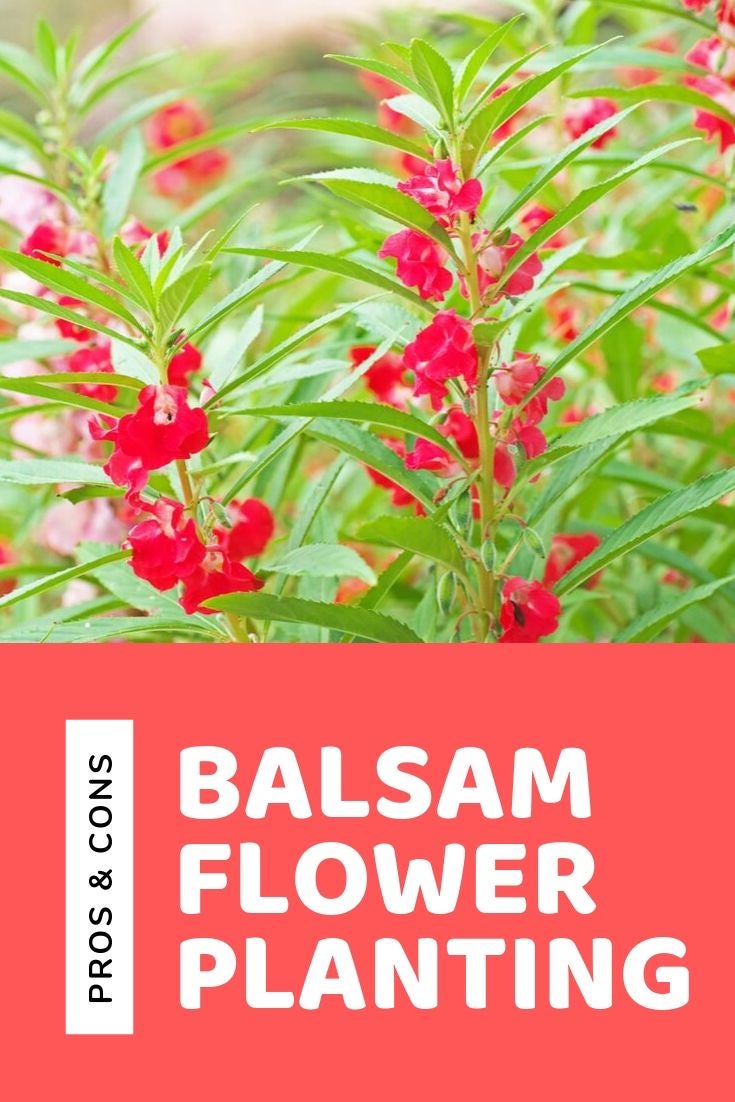 Also known as touch-me-not, rose balsam, garden balsam or jumping betty, balsam flower (Impatiens balsamina) is beautiful and easy to grow – so easy, in fact, that this self-sowing plant can become a weedy nuisance in certain areas. There are many reasons to grow balsam flowers in the garden, and if you’ve got space for this rambunctious plant to spread, you won’t be disappointed – unless the following balsam plant negatives change your mind. Remember, there are always two sides to consider.

(Mary’s viewpoint) Balsam flower is an annual plant that hales from Southeast Asia. Compact, double forms are the most common and available in a stunning array of colors that white and shades of red, salmon, lilac, orange, purple, rose or pink, either solid colored or variegated. This variety in color and form is probably the most popular reason to grow these old-fashioned beauties in the garden, but here are some more:

They attract pollinators and keep coming back. Because balsam flowers re-seed themselves prolifically, you’ll have masses of bright, long-lasting blooms to attract butterflies again and again. Balsam flowers also attract sphinx moths (also known as hawk moths or hummingbird moths), which hover and sip nectar from the sweet blooms.

They can be used for herbal remedies. Herbalists use crushed balsam flowers, often in poultice form, to relieve a number of ailments, including burns and scalds, warts, torn nails, snakebites and various inflammations of the skin.

They’re tough plants. Balsam flower pros include the plant’s ability to thrive in shady areas and moist woodland gardens. Once established, balsam flowers require very little care and they’ll bloom even during your worst summer heat waves. Just amend the soil with a little well-rotted manure or compost before planting, then keep the soil lightly moist but never soggy. Balsam flowers benefit from a light application of dry or water-soluble fertilizer every couple of weeks throughout the growing season – but even without fertilizer, these plants will generally thrive just fine.

(Nikki’s viewpoint) First off, I won’t try denying the beauty and hardiness of these impatiens relatives. In fact, it is for this reason that I added them to my own garden years ago. That and the fact that the flowers are great for attracting pollinators to the area. So why then would I want to ask others to think twice before planting balsam flowers?

They can take over, quickly! When it comes to balsam plant negatives, there is really only one, but it’s an important one. These flowers are prolific self-seeders! Like its cousin Himalayan balsam, this plant reproduces by seed, and lots of them every year. And it is from their seed in which you’ll find their well-earned nickname of touch-me-not, as with just the slightest touch, the seed pods burst open, flailing the seeds everywhere, including areas you don’t want them.

I found this out firsthand the hard way after adding them around my veggie garden to entice more pollinators. They did their job well, and the bees and butterflies came. My vegetables grew and produced abundantly without fail. The garden looked pretty too, with the numerous colorful blooms. But come end of season, when the flowers faded and the fuzzy seed pods took their place, I pulled the annuals and tossed them aside…in the compost pile near the edge of the woods. And to my wonder, I soon found tons of seedlings popping up in the backyard veggie bed, in the compost, throughout the woods and even areas of the front lawn. EVERYWHERE!

While it is recommended that cutting and hand pulling are the best methods of control, and ones in which I frequently employ, years later I continue to battle these menacing beauties. As with the horde of flies that seem to attend the funerals of each one you swat and kill, the more seedlings you pluck them, more seem to pop up to take their place. This year, in fact, they took over that vegetable plot, shading out many of my once thriving plants.

They are susceptible to powdery mildew. In addition to its potential to become weedy in landscape, balsam plants are also prone to developing powdery mildew, which can affect nearby plantings.

There are many reasons to grow balsam flowers in the garden, but it would be irresponsible not to forewarn others of their spreading nature. If you’re looking for something less aggressive, then this plant isn’t for you. Of course, if you don’t mind the seedlings popping up in other areas of the landscape, or if you have plenty of room for the plants to grow and reseed each year, by all means enjoy! That being said, check with your local cooperative extension service beforehand since the plants may be considered invasive in some areas. If the experts give you the go-ahead, grab some seeds and get busy.