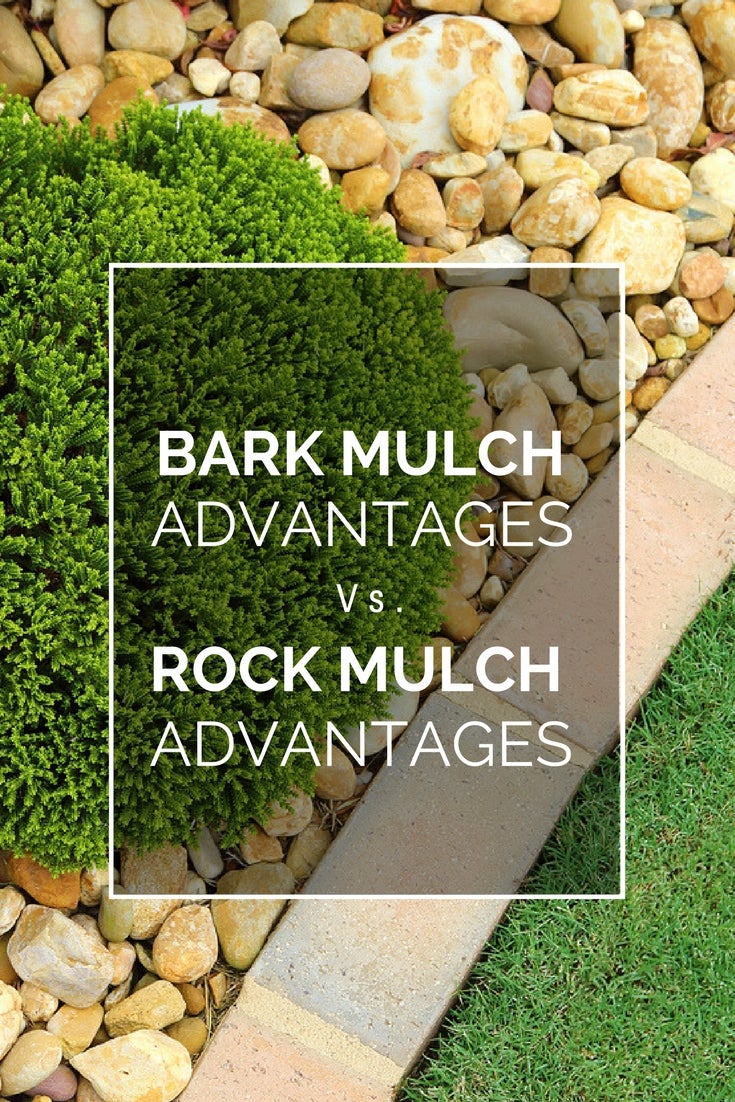 If you are trying to decide whether to use rock or chopped bark as mulch in your garden, you’ll find plenty of good arguments for both sides. And a few disadvantages. Rock mulch advantages may carry the day, but bark mulch pros are quite impressive too. In this article, we will cover both sides of this landscaping conundrum to thoroughly explain the benefits of each type of mulch. At Gardening Know How, it is our goal to provide our readers with all the information we can, such as rock vs. bark mulch, to make decisions as easy as possible. Keep reading to learn the benefits of rock and bark mulch to help you make the right decision for your yard.

Teo’s viewpoint: Rock is not always the first thing that comes to a gardener’s mind when he or she thinks about mulch. But there are many reasons to landscape with stones. And stone mulch has some advantages over traditional mulch.

Variety. One of the biggest of the rock mulch advantages is the wide range you have to choose among. Most traditional bark mulch looks pretty much the same. But the variety of types of rock mulch is dazzling. You can find different types of rock and gravel used for mulch, like lava rock, granite, quartz rock, river rock and pea gravel. These varieties come in a vast range of shapes, sizes, textures, and colors too. That means that you can pick a type of rock mulch that goes well in a certain area. You could use a different type in another for a different effect.

One-time cost. Additional benefits of rock mulch include price. Yes, rock mulch can be more expensive than traditional mulch. But one of the reasons to landscape with stones is that it’s a one-time purchase. One of the big benefits of rock mulch is that it does not decay or decompose. That means that a gardener doesn’t have to keep replacing this landscape mulch. When you buy bark mulch today, you have to plan to buy more. Maybe not tomorrow but soon and regularly. This is partly due to the fact that it decomposes over time and needs replacement, and shredded bark can also blow away in the wind.

Low maintenance with little issues. Because rock mulch does not retain moisture, you probably won’t have any fungi growth either. One of the rock mulch pros is how little maintenance it requires once in place.

Darcy’s viewpoint: As a landscape designer, I am oftentimes faced with the decision of choosing rock mulch vs. bark mulch. Some homeowners have a clear picture of how they want their landscape to look and a definite preference between rock and bark mulches. Other homeowners leave this choice up to me. While presenting designs to my clients, I usually explain to them why rock or bark mulch is a better option for their specific site than the other, as both rock and bark mulches have certain site specific pros and cons.

It’s natural and breaks down. In the woods and other natural spaces, trees and shrubs shed leaves, needles, sticks and bits of bark. This organic matter builds up on the ground, becoming a natural mulch, helping to retain soil moisture, protecting plants and roots, and slowly breaks down over time, adding vital nutrients and organic matter to the forest floor. In the landscape, traditional bark mulch mimics this natural process, whereas rock mulches do not.

Retains moisture and minimizes heat. There are many bark mulch pros. Besides looking more natural in landscapes than rock mulch, some benefits of traditional mulch are retaining soil moisture and reducing evaporation on the soil surface and transpiration of plants. Rock mulches retain and reflect heat, especially light colored stones. They heat up the soil and areas around plants. As soil temperatures rise, soil moisture is lost to evaporation, causing plants to become stressed and increasing their watering needs. As the plants heat up and stress, they lose more water through transpiration. Increased soil temperatures can also be harmful or deadly to plant roots and beneficial microorganisms within the soil. A study in Michigan determined that a 3-inch (7.6 cm.) layer of bark mulch reduced midday soil temperatures up to 18 degrees.

Suppresses weeds and nourishes soil. Other important reasons for mulching organically are weed control and the added nutrients and microbes of bark mulches. Because of its finer texture, a thick layer of bark mulch can suppress weeds better than rock mulches. Garden debris eventually builds up in beds with fabric and rock mulches, and weed seeds quickly germinate and take hold in the warm little crevices between rocks.

Bark mulches break down and decompose over time. While this does mean the added cost of having to replenish bark mulch every few years, it can save money on watering, fertilizing and soil amendments in bark mulched beds. As bark breaks down, it adds nutrients and organic matter to the beds. This not only feeds plants and improves soil texture and quality, but it also creates an excellent habitat for beneficial soil microorganisms and worms.

Less expensive overall and easy to work with. Bark mulch advantages also include cheaper upfront costs and less back breaking work. Though bark mulch does have to be topped up every few years, it is usually much less expensive than rock mulches. Rock mulches are also extremely heavy and hard to work with. Available in easy to haul bags or in bulk, bark mulches are lightweight and easy to apply. Once rock is placed in a garden bed, it is very difficult to add, replace or divide plants, whereas it is very easy to dig into bark mulches to complete these tasks.

When deciding between rock and bark mulches, it is important to consider the site. An area which receives a lot of sun will heat up much more quickly with rock mulch than it will with bark mulch. This can be extremely stressful for certain plants or prime conditions for plants that prefer arid conditions. Personal preference will also play an important role in your decision. Bark mulches provide a more natural look to beds, but rock mulches can create a formal, clean look in the landscape.

Tell us what you think: Leave a comment
6 people are already talking about this.
Printer Friendly Version
Read more about Gardening Pros and Cons
<PreviousNext>
Did you find this helpful? Share it with your friends!
FacebookTweetPinEmail