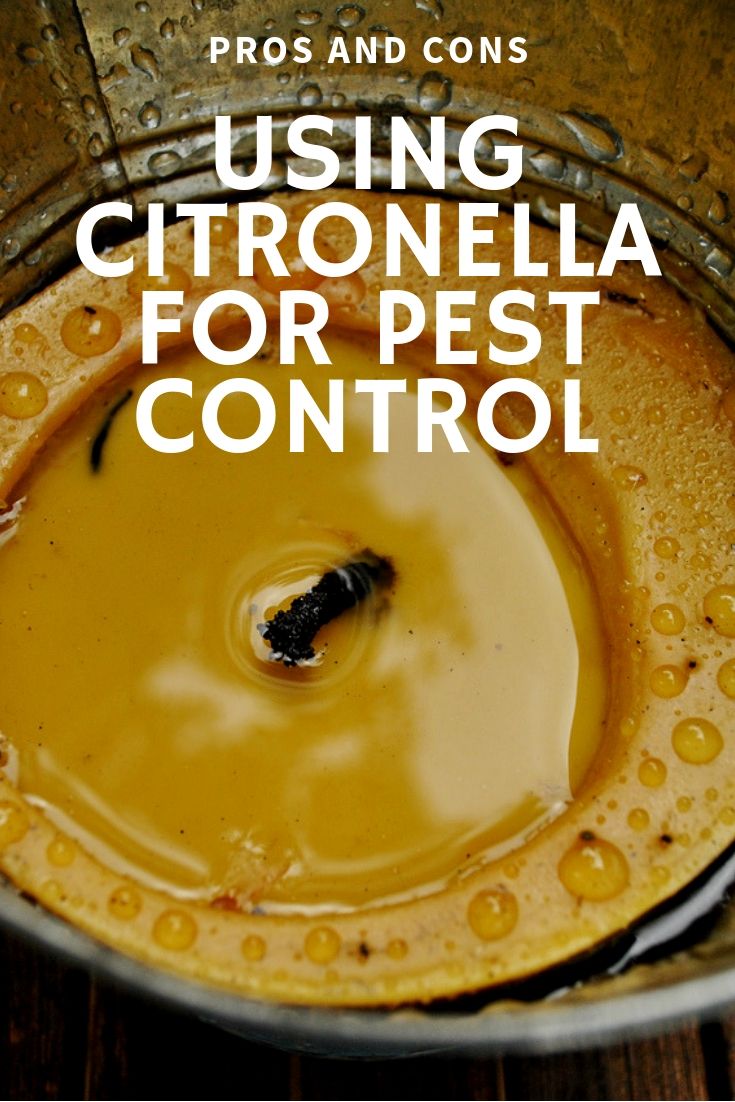 Warm summer temperatures have everyone out in droves, including the mosquitoes. We’ve all heard about West Nile virus, Zika and Malaria, so summer is a good time to grab not only the sunscreen but the citronella candles too. Citronella is a common name for Cymbopogon nardus, a type of perennial grass with lemon-scented leaves. Essential oils distilled from the grass is often used as a repellent against mosquitoes, fleas and biting flies and is said to mask scents that attract the pests. The question is, does it work? And at what cost? Let’s review the pros and cons of citronella for pest control.

(Amy’s viewpoint) Yes, repellents that contain DEET are more effective, but I tend to be leery of names like diethylnetatoluamide, if only because I can’t pronounce them. Pronunciation aside, I find that there are other benefits of citronella. Before folks used citronella or DEET, they were relegated to using smoky fires or daubing themselves with mud to beat flying pests. While these practices may work, they aren’t very practical. So, of course, people wanted to find a better way to repel insects, especially the ones that cause painful, even deadly, bites. Enter citronella, the best insect repellent thus far.

Using citronella for pest control was actually an accident, but it beat smelling like a campfire with mud plopping off your nose, and I really can’t see any reason not to use citronella. Here’s my reasoning.

It’s natural and been around a long time. Oil of citronella is the active ingredient in products such as citronella candles. It is derived from two types of perennial grasses that are cultivated and harvested for their essential oils. It is a natural product that has not been chemically altered. For hundreds of years, it has been used medicinally, and today, is used in a variety of foods and drinks. Its insect repellence was accidentally discovered in 1901 when it was used as a fragrance in salon products.

Conversely DEET is a synthetic compound that results from a reaction of toluic acid with thionyl chloride followed by a reaction with diethyl amine that was first synthesized in 1955. I don’t have a doctorate in chemistry, so I prefer to use products that come from nature, like grass, which I understand. Anyway, citronella has 54 years of use on DEET, a proven track record.

Citronella is safe and nontoxic. Another citronella pro is it’s nontoxic, even to the insects it’s repelling. It acts by masking scents, such as carbon dioxide and lactic acid, that are attractive to pests. Few people have any sort of allergic reaction to the oil, and even if ingested, citronella won’t affect a person negatively. It just passes through the system where it breaks down and is passed out in the urine.

The same cannot be said of DEET. Canada has restricted the amount of DEET that a product can contain, citing safety concerns. The EPA, however, classifies citronella as a biopesticide with a nontoxic mode of action.

Cons – Reasons Not to Use Citronella

(Mary’s viewpoint) Don’t pin your hopes on citronella to repel pests, especially if you’re traveling to an area where mosquitoes are known to carry dangerous diseases. If you’re seeking a natural mosquito repellent, oil of lemon eucalyptus is more effective and has been approved by the Food and Drug Administration. Here are just a few disadvantages of citronella pest control:

Allergic reactions are not unheard of. Citronella is thought to be safe, although some people may experience a mild allergic reaction to the eyes or skin. Citronella shouldn’t be used on children under six months of age unless directed by a physician. If you use citronella on young children, be careful not to apply the substance to their hands because they may rub it into their eyes or place their hands in their mouths.

Information regarding safety and use is sketchy. Although it hasn’t been proven, some people think citronella shouldn’t be applied to the skin at all because it may increase the heart rate in certain people. It may also cause a mild cough or throat irritation if ingested.

According to the United States EPA (Environmental Protection Agency), there is little to no toxicity in citronella oil, and it poses no risk to humans or animals. There is also no risk to bees and other pollinators. Health Canada, however, has expressed concern about the disadvantages of citronella, especially the safety of applying large amounts of citronella products used on the skin.

The National Pesticide Information Center in the United States advises use of common sense when using citronella. For example, don’t allow young children to apply citronella by themselves.

Lack of scientific research. There aren’t a lot of studies to support the idea that citronella actually repels mosquitoes. At best, products with a citronella base may keep pests at bay, and may reduce bites by about half, but only for a couple of hours at most. The oils evaporate quickly. Candles, which have a very weak concentration of citronella, are actually of very little use. As for plants, studies indicate they don’t work at all on their own.

How Do the Benefits of Citronella Fare?

In the end, it’s safe to say that most people would prefer using a nontoxic, natural product on their body and that of their family. In fact, you don’t even have to apply citronella to the skin. It is found in candles, sprays and wristbands. And although the repellency is short term, there are other ways to mitigate the number of pests wanting to feast on you, such as limiting time outside at dusk, removing any standing water where mosquito larvae hatch, and wearing light colored clothing. A combination of these and a citronella candle should be more than enough to keep you bug free and enjoying the summer months.