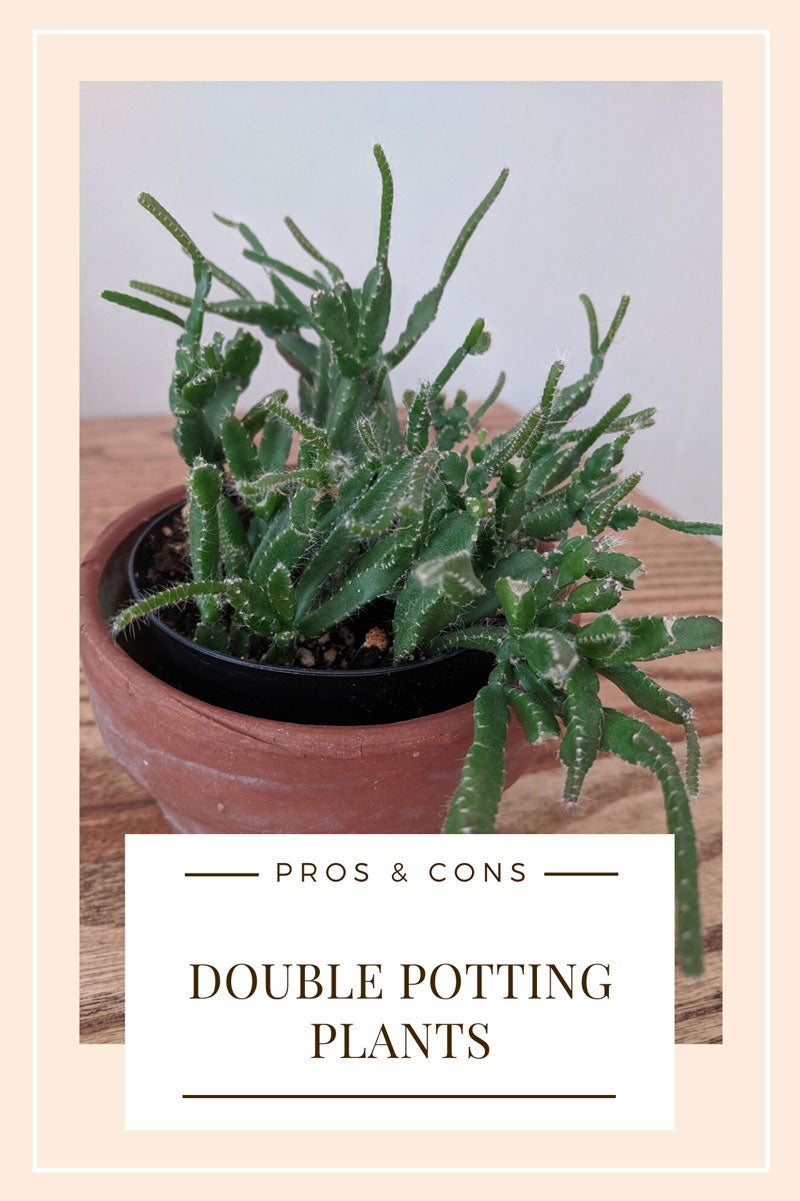 Double potting is a term that can apply to a couple different gardening methods, but the basic gist is always the same. It’s the practice of fitting one potted plant inside another, slightly larger pot. No matter how you do it, the benefits of double potting are numerous and not as obvious as you might think. But as with all good things, double potting problems may exist too. Keep reading to learn more about double potting advantages and disadvantages.

(Liz’s viewpoint) Perhaps the most common form of double potting involves the use of a cachepot. “Cachepot” is French for “hidden pot,” and the secret of its use is in its name. It’s a larger, decorative container that serves to hold a slightly smaller, probably less aesthetically pleasing, container that the plant is actually growing in. There are several advantages of double potting in this way.

First of all, the time people are most likely to repot a plant is when they first bring it home from the store, when they want to get it out of that unsightly plastic container. The thing is, being purchased involves a change in temperature, light, location, and humidity – all traumatizing events in a plant’s life that can affect its health. It’s used to growing in that unsightly plastic container, and being repotted right away could be enough to do it in for good. That’s why double potting is so good. Simply nestle your new plant in the container of your choice, and save the repotting for a time further down the road. This, to me, is probably one of the greatest benefits of double potting.

Of course, you may never choose to move your plant permanently. Another of the double potting pros is that while the container stays the same, the plants that inhabit it can be swapped out with no fuss. This works extra well for annual flowers and seasonally blooming plants. Place a big decorative container in your landscape or by your front door, and you can swap out the plants growing all year long, so you’ll always have blossoms without any of the hassle.

This idea of shuffling multiple potted plants into the same container brings us to another kind of double potting that has its own host of advantages – in-ground double potting. By sinking a container into a hole in the ground, you can swap out the plant growing in that part of your garden whenever you please, without ever having to dig.

In-ground double potting advantages don’t just stop at easy change-ups, though. It can also make for a healthier, more low maintenance plant. Container plants grown aboveground need to be watered more frequently, and are far more susceptible to wind damage and fluctuation in temperature. Double potting gives a plant all the benefits of growing in the ground (better water retention, stable temperature, safety from wind) without forcing you to commit to planting it in your garden.

If the plant stops blooming, or you need to bring it indoors for the winter, you can simply lift it out of its spot in the ground and move it. You could dazzle your neighbors with a garden full of cacti in Minnesota, if you wanted. Just make double sure to bring them in before the nights get cold!

(Nikki’s viewpoint) It’s not that I’m totally against double potting plants. In fact, I use this same practice with many of my own. There are, however, a few disadvantages of double potting and it wouldn’t be wise not to at least consider these before using cachepots in the home or out in the garden. to placing pots inside other ones

First, those decorative cachepots don’t have any drainage holes. While it’s all fine and good to place your potted plants (with drainage) inside these containers, you need to keep in mind that standing water from irrigating your plants can quickly become an issue. Life happens and when you’re in a hurry (or just feeling a little lazy), it’s not uncommon to pour some water on your plants, only to be reminded later with annoying fungus gnats or smelly stagnant water that’s been sitting for weeks or months.

Oh, and then there’s the real good chance of losing said plants to root rot if the pot they’re planted in has been sitting in that water too. I have learned this from personal experience (yes, I’m guilty of being lazy at times). That’s why it’s highly recommended to remove the plants from the cachepots when watering them, even if you’re pressed for time – Note to self: heed this recommendation.

So, what about those in-ground double pots? Well, these are a bit easier and less of an issue since they’re usually not as fancy (cause they’re in the ground and not seen), so many of these will actually have drainage holes of their own, or you can add them. This, of course, solves the with double potting problems with irrigation.

Other than the watering issue, I find many of Liz’s benefits to double potting plants to be reason enough to give it a try. Just be sure to keep those “cons” of double potting in the back of your mind.