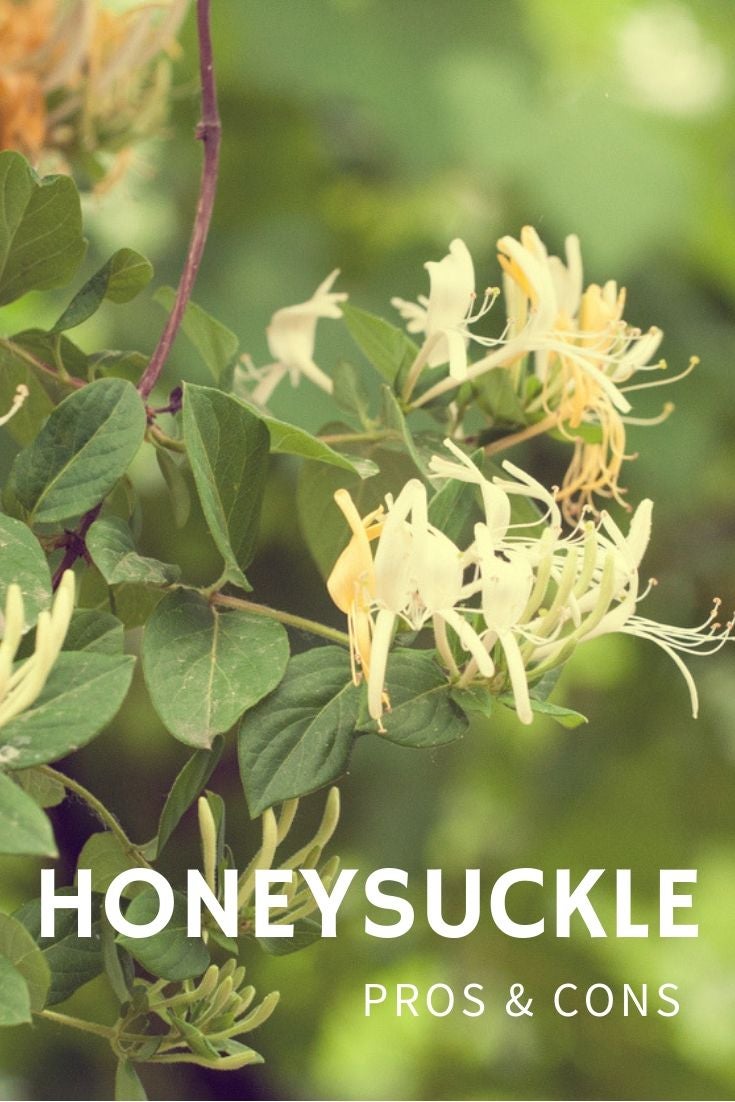 Honeysuckles get a bad rap, and for the most part, they deserve it. With a little knowledge and care, they can be a great benefit to the garden. Keep reading to learn more about responsible honeysuckle growing as well as honeysuckle planting drawbacks.

(Liz’s viewpoint) While they have beautiful and fragrant flowers, several popular species are highly invasive outside their native Asia, and they’re notorious for choking out local plants. There are several shrub varieties too, and while they don’t spread as vigorously as vines and might seem like a good idea, grow very densely and manage to choke out native plants. These should also be avoided. But not all honeysuckles are like this, and there are, in fact, several good honeysuckle plants.

There are native and non-aggressive honeysuckle plants. Not all honeysuckles are invasive, and not all are non-native. Trumpet honeysuckle (Lonicera sempervirens) is a North American native with red flowers that are extremely attractive to hummingbirds. If you’re looking for a reliable native plant that won’t cause trouble, this is the one, and it comes in a wide variety of cultivars. Some other good, responsible choices are Brown’s honeysuckle (Lonicera x brownii), winter honeysuckle (Lonicera fragrantissima), and Woodbine (Lonerica x americana).

They’re tough. One of the reasons the Asian varieties are such a nuisance is that they’re very hardy and adaptable, especially in the American South where temperatures don’t fall too low. Luckily, this toughness translates to the good varieties as well. If you’re looking for a no-nonsense, reliable plant, honeysuckle is a good bet.

They attract pollinators. This is one area where the North American native trumpet honeysuckle really shines. Because of their red color and tubular shape, the vine’s flowers are ideal for hummingbirds, and they really do attract them. Put a vine near a picture window or patio to reap the benefits. If you plant it, they will come!

They smell heavenly. Even more than their invasive qualities, honeysuckles are best known for their sweet smell and flavor. What kid hasn’t plucked a flower or two to taste the drop of nectar inside? Unfortunately, trumpet honeysuckle doesn’t have much of a scent, but some other non-invasive varieties do have that amazing fragrance. These include European honeysuckle (Lonicera periclymenum) and winter honeysuckle.

Of course, nothing quite matches the heady scent of Japanese honeysuckle, especially for the many of us who have it deeply tied up in our heads with memories of spring. While you should never plant a Japanese honeysuckle, there’s nothing to stop you from sniffing the ones that are already growing. Even bad plants have a good quality or two.

It can overwhelm nearby plants. Invasive honeysuckle vines, which are non-native, can out-compete native plants for nutrients, air, sunlight and moisture. The vines can ramble over the ground and climb up ornamentals, small trees and shrubs, smothering them, cutting off their water supply or stopping free flow of sap in the process. One vine can reach lengths of 80 feet (24 m.)

It spreads and grows just about anywhere. Japanese honeysuckle, which was introduced to the United States in 1906, has been a particularly problematic invader since 1919. Many invasive honeysuckle plants, including Japanese honeysuckle, were planted along the nation’s highways to stabilize banks and control erosion. The plan worked, but unfortunately, invasive honeysuckle is an opportunist that has spread into woods, glades, prairies, savannahs and floodplains, climbing over everything within its reach. Like most non-native species, it has few natural enemies to keep it in check.

It’s difficult to control. Invasive honeysuckle is extremely fast-growing and very difficult to get rid of. The vines grow by both roots and rhizomes, and if that weren’t enough, they also root at nodes along the vines. Animals and birds disseminate the seeds far and wide.

Only Go with Good Honeysuckle Plants

Honeysuckles have a delicious scent that attracts humans and pollinators alike, and they can be a huge boon to your garden”¦provided you grow the right varieties. If you’re thinking about planting honeysuckle, plant a non-invasive, native honeysuckle vine and steer clear of Japanese honeysuckle (Lonicera japonica) and other invasive species. Don’t assume your local garden center or nursery will know the difference. Check with your local extension office before planting to make sure the species you’re considering is non-invasive.

Tell us what you think: Leave a comment
5 people are already talking about this.
Printer Friendly Version
Read more about Gardening Pros and Cons
<PreviousNext>
Did you find this helpful? Share it with your friends!
FacebookTweetPinEmail