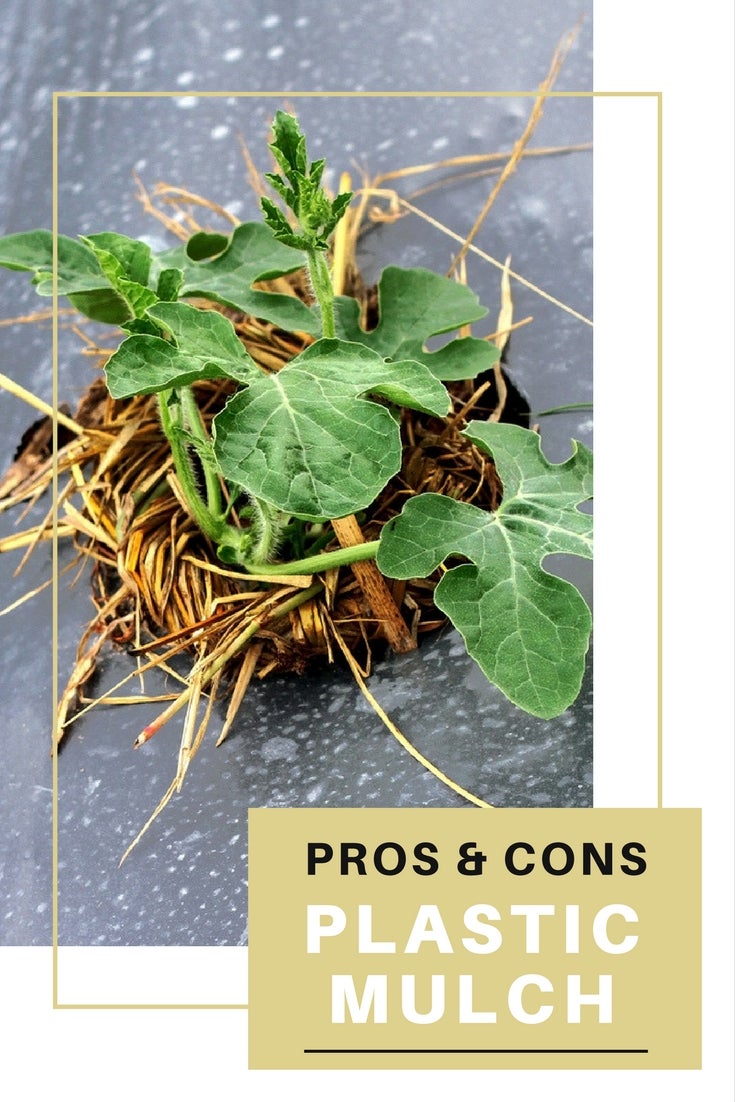 Using plastic for mulch isn’t a new idea. Commercial farmers have used it for decades. But it is finding its way into home gardens, where it finds friends and foes. The benefits of plastic mulch include increased and earlier crop yields. But do these outweigh the disadvantages? Some feel that the advantages of inorganic mulch outweigh the drawbacks for many crops in certain circumstances. Where do you come out in weighing plastic mulch pros and cons? If you aren’t sure, you’ll find the top arguments on both sides right here.

Teo’s viewpoint: No matter what you think of the organic vs. inorganic argument, the benefits of plastic cannot be denied. Using plastic mulch over soil keeps people from walking in the area, preventing compacted soil. It also warms the soil, keeps down evaporation and virtually eliminates weeds.

Warming the soil. All mulch serves to regulate the temperature of the soil. One of the advantages of inorganic mulch, and benefits of plastic mulch, is that it warms the soil as much as 5 degrees F. What effect does this increased warmth have on vegetables? It means you can plant them earlier than you could without the mulch. In fact, if you grow warm-season vegetable crops with black plastic mulch, you’ll usually get higher yields. You’ll also be able to harvest up to three weeks early.

Reducing evaporation. One of the reasons you use any mulch is to help the soil hold moisture. So yet another of the plastic mulch pros would be that it cuts down on evaporation by some 70 percent. This is one of the best reasons for plastic mulch use. Reduced evaporation will cut your water bills, reduce your water consumption and prevent the leaching of nutrients. But you’ll need to install drip irrigation systems under the plastic, since it won’t let rain seep through.

Eliminating pesky weeds. Weeds are not friends of vegetable gardeners. They compete with the young vegetables for water and nutrients, and they can also shoulder or shadow out tender crops.

One of the best plastic mulch pros is the fine job it does at taking out weeds. That means you won’t be out there on your knees weeding and you’ll use less herbicides. Your vegetables will be healthier. Since some insects eat weeds and others use them for laying eggs, you’ll have less pests to worry about too.

Amy’s viewpoint: I definitely see the benefits of mulch in the garden; I’m just not as big of a fan about the recent popularity of plastic mulches. Plastic mulches have their cheerleaders, I just don’t happen to be one of them. Yes, they increase soil temperature so earlier crops are possible, they retain moisture and retard weed growth, but I see many problems with plastic mulch.

Plastic mulch comes in two basic types: black polyethylene film and clear polyethylene. Black plastic is used to retard weed growth, retain moisture, and heat up the soil. Clear plastic does not suppress weed growth, but it is also used to raise the soil temperature. Using polyethylene film as vegetable mulch actually has its roots back in the 1950’s. Dr. Emery M. Emmert of the University of Kentucky was one of the first to recognize the benefits of using both low-density polyethylene (LDPE) and high-density polyethylene (HDPE) films as mulch. He also was interested in and wrote about using plastic for greenhouses and was eventually dubbed the “plastic surgeon.” All jokes aside, there are a number of problems with plastic mulch.

Plastic is costly and doesn’t break down. First of all, plastic mulch is quite a bit more expensive than other mulch products. It does last longer, but that is because it doesn’t naturally degrade as organic mulches do. Organic mulches may have to be replaced each year, but as they break down they are enriching the soil and feeding all the beneficial bacteria. Since plastic mulch doesn’t break down naturally, it must be removed from commercial fields annually; a costly practice.

The process of proper placement of plastic is in itself a significant plastic mulch issue. It requires specialized equipment and additional labor as does the removal of the mulch from the field after harvest. Plastic mulch is used in conjunction with drip irrigation, not in and of itself a bad thing, but it does increase the cost of production since the drip system must be removed when the plastic mulch is during post-harvest.

Plastic is more difficult to dispose of. Another downside of plastic mulch is disposal. Not only is it time consuming to remove plastic mulch from a field, but great care must be taken to avoid leaving sections of plastic in the field. Not only are these remains unsightly, but they do not decompose and should not be tilled into the soil. Disposal of plastic mulch definitely raises environmental concerns since the plastic does not degrade. Instead, it becomes a part of the ever increasing landfill system. And many landfills require payment for disposal, yet another added cost.

Some of the problems listed above will pertain to the home grower but because everything is on a smaller scale, here are some plastic mulch cons for the home grower to consider:

Plastic mulch can get too hot. While black plastic mulch is ideal for heat-loving veggies like tomatoes, peppers and melons, it isn’t suitable for those living in warm climates; the plants will likely get scorched. Plastic mulch is also not appropriate for cool season crops such as lettuces, peas and root veggies because the soil warms too much.

Sometimes too much moisture is a bad thing. Yes, plastic mulches can reduce soil evaporation, but plants in plastic mulch also don’t easily get irrigation from rainfall or overhead sprinklers. Instead, the home owner will have to go to the extra time and expense of installing soaker hoses or drip irrigation around each plant. Additionally, since moisture doesn’t evaporate, it is easy to overwater and drown plants. Ultra-damp conditions can foster fungal diseases too.

More difficult for plants to obtain nutrients. Fertilizing plants under plastic mulch can be a nightmare. The holes around the plants just aren’t large enough to side-dress without burning the plants. While plastic mulch retards weeds, when you cut a hole in it to plant your veggies, weeds can and will enter into that soil window. This means they may grow in close proximity to the crop, competing for nutrients and water.

Now I’m not some rabid environmentalist, but I am a concerned human being. I can’t support an inorganic, expensive, product that is fostering the use of landfills, landfills that never seem to go away, ever – especially given that estimates for the complete breakdown of plastic ranges from 450 years to 1,000. Of course, that’s only a guess because plastics have only been around for maybe 100 years. Hey, but I must be in the minority. Approximately 2,500 square miles (6,500 km.) of agricultural lands use polyethylene mulch. What’s next? Mulching with tires? Oh wait, that’s already being done. It must be much better for the earth”¦tires only take between 50 and 80 years to degrade.

Are Plastic Mulch Issues Enough to Dissuade You?

Obviously, there are strong opinions when it comes to using plastic mulch in the garden. It certainly has its share of benefits, but then again many of your organic mulch products can serve these same advantages. And plastic mulch definitely has its opponents, with a number of downsides that are worth consideration. Ultimately, however, it’s an individual choice but one that should be made easier with two sides of the story.