Pros And Cons Of Growing Wisteria Vines In Gardens 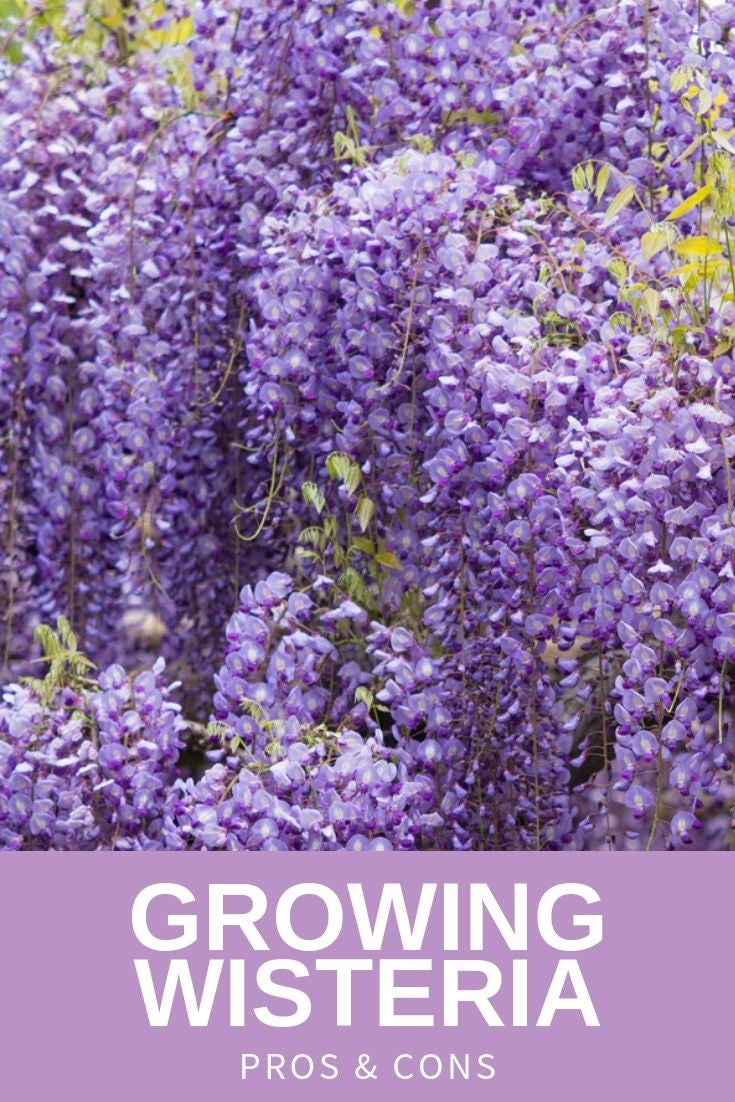 Wisteria is one of the most elegant looking plants, with rapid growth and ease of care. Those delicate, drooping clusters of flowers on twining vines are a sight to behold in spring. However, this plant has a sinister side of which its worshipers may not be aware. There are numerous reasons not to grow wisteria, especially if you are in certain regions. We’ll list some disadvantages to planting wisteria and let you decide for yourself if you want this beautiful invader in your garden.

(Mary’s viewpoint) The many benefits of wisteria are most prominent in spring with a spectacular display of pendulous, fragrant blooms. Planting wisteria in gardens is a popular pursuit, especially in the warm climates of the Southern United States.

It has great ornamental appeal. Wisteria is a hardy vine with dark, glossy leaves and clusters of hanging blooms that attract butterflies, bees and other pollinators in mid- to late spring. The pea-like flowers may be bluish-lavender, purple, pink, red-violet, mauve or white, depending on the species. Watch for interesting, hanging seed pods that follow the blooms.

Wisteria is a vigorous grower. This vigorous grower climbs up any sturdy structure, gaining lengths of 30 feet (9 m.) and sometimes much more. That said, this isn’t a vine for a flimsy fence or trellis and it usually isn’t a good idea to plant it against a building. Even native wisteria, which is less invasive than Japanese wisteria, tends to be aggressive and can destroy paint or crawl under siding.

It’s an easy vine to grow. More wisteria planting pros to consider include the fact that it is a cinch to grow and adaptable to nearly any soil types. Additionally, wisteria is easy to propagate from cuttings. Once established, wisteria is a long-lived plant that will be provide beauty to the garden for many years.

The plant helps your soil. Like all members of the legume family, wisteria is a nitrogen-fixing plant, thus improving soil quality. The prunings make great mulch, but be sure the branches are dead, or you may end up with new vines wherever you spread the mulch.

(Bonnie’s viewpoint) Wisteria is undeniably an attractive plant with lovely flowers. Yet, it is a prolific self-seeder. There are many non-native varieties that spread and hybridize with our native version, and mature stems become thick and twine around anything, often causing damage.

They can become a nuisance. The Asian varieties need to be fully mature before flowering, often taking up to 15 years. These alien plants seem to love North America and are considered nuisance plants in many states. Additionally, Wisteria can grow up to 30 feet (9 m.) in length, making it a huge plant to manage.

They can take over native plants. There are both Chinese and Japanese varieties. These non-native species are heavily used in the U.S. and elsewhere as ornamental vines. When these plants escape cultivation and grow in the wild, they can break limbs and even girdle tree trunks. The heavily leaved vines smother native flora and form dense thickets. Not only do native species get displaced, but the entire ecological balance is knocked off kilter. The American species is preferred as an ornamental plant, as it is a bit more tame than its Asian counterparts.

They are difficult to manage. Should you think twice about an already existing wisteria vine, keep in mind that the plant is notoriously hard to remove. Not only will any seed left behind readily germinate, but any leftover vines that have rooted at internodes will produce new plants. Plus, those old stems will need to be cut with a saw and often quite a bit of damage is left behind from the heavy press of the vines. Wisteria vines will take over your garden, fence, garage and house without annual pruning. In areas with heavy nitrogen content in soils, they put on a lot of weight in just one year and you will be forced to do a lot of maintenance just to keep the plant in check.

Of all the reasons not to grow wisteria, a conscientious gardener will find the recommended chemicals hair raising as well. If you must use an herbicide, retreatment is almost always required. Glyphosate and Triclopyr are the recommended formulas. Each has the potential to drift during spraying and have several listed health hazards on the label.

It’s toxic. One of the scarier cons of growing wisteria is its toxicity. The seed pods it produces are quite ornamental and fuzzy, but the seeds inside are poisonous. Children and pets are at the most risk and a trip to the vet or emergency room will occur if ingestion happens.

Should You Be Planting Wisteria in Gardens?

There are many benefits of wisteria, but there are also significant drawbacks. So, if you’re considering adding the plant to your landscape, please keep in mind the disadvantages to planting wisteria before you take that leap. The size, toxicity, strength of vines, management concerns and potential to invade make the wisteria vine a probable “no” in the garden.

Plant the native variety to minimize, but not eliminate, problems with invasiveness, as even the American species is high maintenance and poses a poison risk. Locate the plant carefully and prune regularly to keep growth in check. With proper care, wisteria will grace your landscape for generations. That said, it may be far better to use natives like wild clematis, ground nut, dutchman’s’ pipe and other vines which seem to have better manners but spectacular blooms and foliage.

Tell us what you think: Leave a comment
1 person is already talking about this.
Printer Friendly Version
Read more about Gardening Pros and Cons
<PreviousNext>
Did you find this helpful? Share it with your friends!
FacebookTweetPinEmail