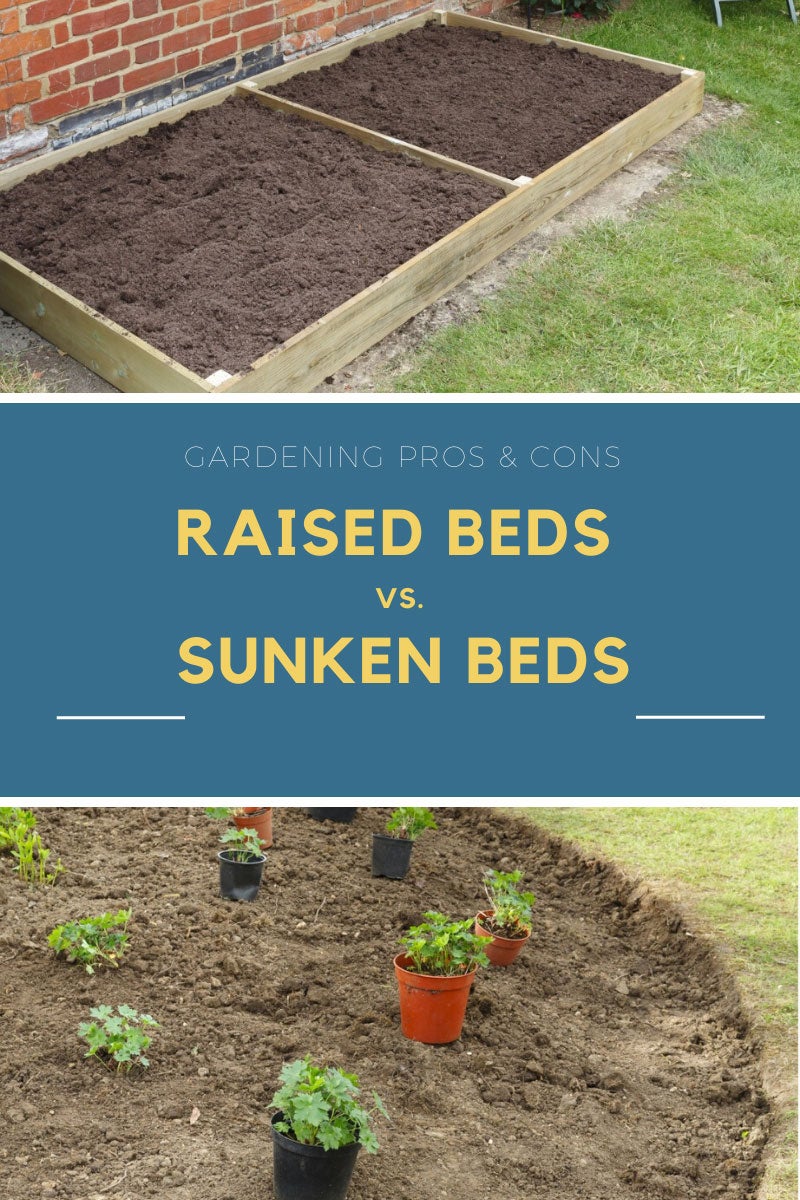 Deciding between raised beds vs. sunken beds really depends on your soil condition and region – and perhaps your personal preference too. First, you need to answer the questions, “what is sunken bed and what is a raised bed” since knowing the differences between the two will also play a role in determining which is better for your circumstances. Each has decided advantages and can help improve soil health along with some other growing conditions.

I’ve had raised beds on different properties before and love that the soil warms up early and I can sit on the edge and weed with leisure. The problem is that they dry out quickly. Lately, we have been experimenting with trenching and sunken beds.

Because our region is desert dry, the method holds and directs water, allowing us to irrigate less frequently and efficiently moves moisture to plant roots. However, each method has different benefits tied to specific regions and aren’t the sole solution to gardening problems.

What is a Raised Bed?

When trying to decide whether to use raised beds vs. sunken beds, it helps to consider your zone and soil type. Raised beds are useful in regions with a temperate climate and plentiful rainfall. It is easy to add soil amendments to a raised bed to increase porosity and add nutrients. Plus, they can be built out of anything, such as old bricks or even just mounds of dirt.

One of the main differences between raised and sunken beds is that raised beds warm up more quickly in spring. They also keep plant roots warmer, leaving less chance of freezing. However, a raised bed benefits from a thick layer of mulch to keep moisture in the soil, since it will dry out faster than in-ground soil.

What is a Sunken Bed?

Sunken beds serve several purposes and are very useful where little rain occurs, good for desert-like climates or drought stricken areas. They are simply depressions in which you install plants. You can get really fancy and trench from plant to plant, forcing water to each set of roots.

Sunken gardens in sandy soil can be used to add compost and other elements to the site. Building walls around the sunken garden with organic material, captures moisture while simultaneously adding a slow release of nutrients. The hills also capture extra moisture and will add shade at certain times of the day to keep the depression from drying out.

Is a Raised or Sunken Garden Bed Better?

With all the benefits and differences between raised and sunken beds, it still may be hard to decide which is right for you. Gardeners in the rain heavy parts of the Pacific Northwest, for example, will do well with raised beds. However, southern gardeners in arid zones or where heat is high almost year around, should try sunken beds.

Any region could use either method, but sunken gardens could create a boggy mess if soil is clay, while raised beds will need daily watering if soil is sandy. So consider your annual rainfall, temperatures, and soil type before building either.

Tell us what you think: Leave a comment
1 person is already talking about this.
Printer Friendly Version
Read more about Gardening Pros and Cons
<PreviousNext>
Did you find this helpful? Share it with your friends!
FacebookTweetPinEmail