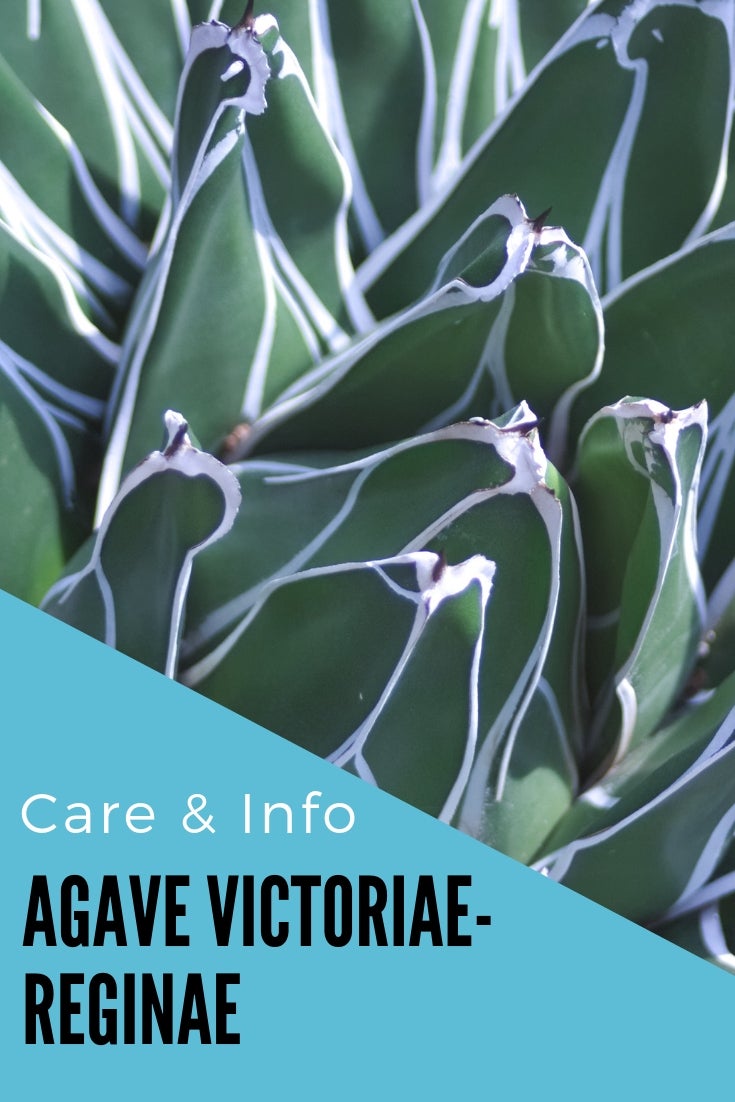 If you’re still looking for that one centerpiece for your garden, balcony or even a sunny living room, stop right here. Agave victoriae-reginae, better known as the Queen Victoria agave, is probably one of the most spectacular succulent species out there. Tough and easy to grow, it makes the perfect addition to any spot that still lacks an eyecatcher plant!

Keep reading for everything you need to know about growing the Queen Victoria agave.

This caresheet is a guest post by Mari from Houseplant Central, an informative website centering around houseplant care. This indoor gardening addict has been growing houseplants for years now and hopes to inspire you to greenify your own home too!

This hardy agave species is naturally found in North Eastern Mexico, where it inhabits (semi-)desert conditions. This is not a very hospitable habitat: the plant is known to grow on very steep cliffs, holding onto poor soil. As a result, it has evolved to be very hardy and withstand almost anything nature can throw at it.

If you’ve managed to obtain a Queen Victoria agave to grow in your own garden or home, you’ll find that adhering to general succulent/agave care guidelines works just fine for this species. It’s not demanding and will forgive the occasional beginner mistake.

This slow-growing agave will thrive in well-draining, airy soil that contains a significant amount of grit. When grown outdoors it should be protected from the blasting afternoon sun to prevent burning. Indoors, where the light is weaker, place the plant in the sunniest spot you can provide.

Like most succulents, the Queen Victoria agave appreciates plenty of water during the summer growing season. Provide water as soon as the soil goes dry, which can be multiple times a week in very dry climates. During wintertime this species goes dormant, which means waterings should be reduced drastically to prevent rot. Once or month (or even less when temperatures drop low) should work best.

Provide your Queen Victoria agave with the care it needs and you’ll slowly see it flourish into the typical geometric growth pattern that has made it so popular. With a maximum size of around 50 cm/20″ this is not the largest agave out there, but its spectacular leaves more than make up for that.

The Queen Victoria agave is a great choice for those that would like to grow succulents outdoors for most or even all of the year. Although the species prefers temperatures above freezing (0 Â°C) year-round, it can deal with light frost as long as its soil is kept dry.

In climates that get a lot of rain and/or frost during wintertime, you might want to move your Queen Victoria agave indoors during the harshest months.

If you’re looking to multiply your Queen Victoria agave, the easiest way to do so is to look for the offsets this plant naturally produces. Simply separate one of these pups from the main plant using a sharp knife, leave it to dry for a few days and then plant it in well-draining soil.

Like other agaves, the Queen Victoria agave will bloom once, usually after 10 to 15 years. This bloom signals the end of the plant’s life, as it’s monocarpic, but don’t despair. Agave blooms are a wonderful sight to see and you can harvest the seed pods to start the cycle all over again.

Tell us what you think: Leave a comment
8 people are already talking about this.
Printer Friendly Version
Read more about Guest Gardening Bloggers
<PreviousNext>
Did you find this helpful? Share it with your friends!
FacebookTweetPinEmail