Guy Gardening: What happens when males call the landscape shots? 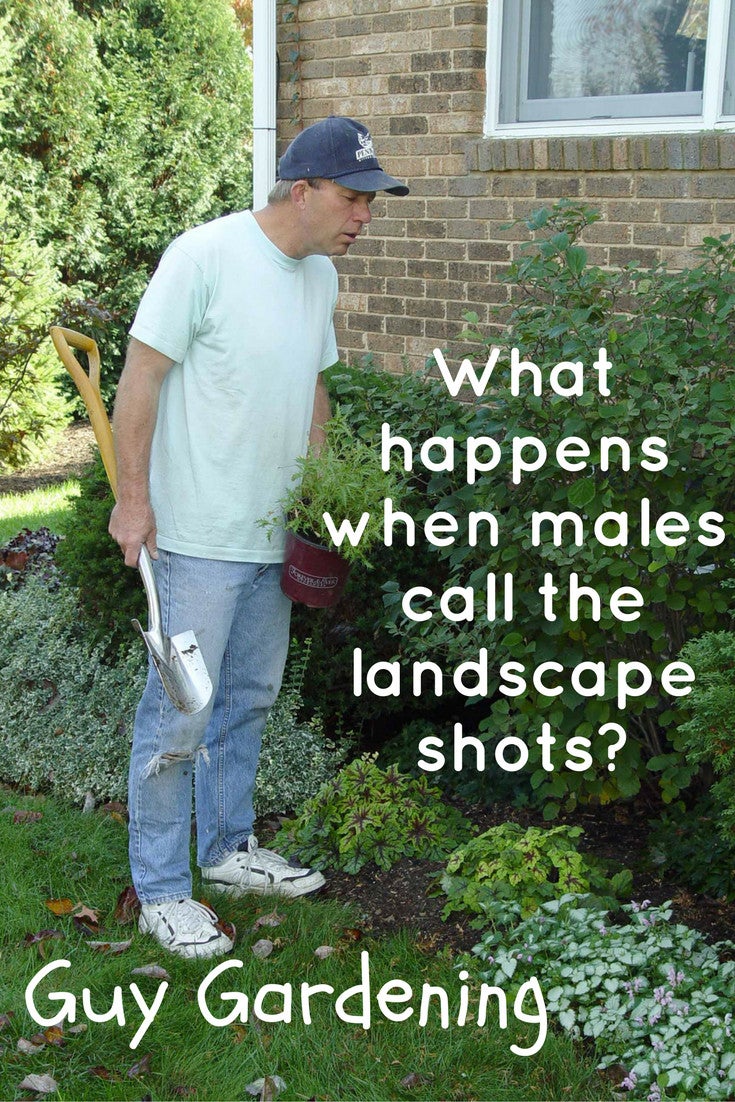 This week’s gardening guest blogger is George Weigel, a long-time (and male) garden columnist for The Patriot-News/Pennlive in Harrisburg, Pa., as well as a garden designer, speaker, Pennsylvania Certified Horticulturist, and, as his fast-balding brother puts it, a “certified garden wacko.” He’s also author of the “Pennsylvania Getting Started Garden Guide“ (Cool Springs Press, 2014) and co-author of “Month-by-Month Gardening in Pennsylvania“ (Cool Springs Press, 2015). Both books are available on George’s info-rich blog/website at http://georgeweigel.net).

A lot of guys are just in unfamiliar territory around plants.

Let’s face it, guys. By genetics, up-bringing or maybe osmosis, women have a much better clue about plants than men.

I’m generalizing, of course, because some guys are highly impressive plants-people. But I’ve talked to enough female garden-center staffers to realize that as a whole, our half of the species has a long way to go in the landscape.

These staffers will tell you that it’s almost pathetic when your basic football-watching, beer-drinking, golf-playing guy somehow ends up on assignment to the garden center.

This is not familiar territory.

Some guys go for the fakeout maneuver in which they act like they know what they’re doing, only to leave with a motley cart full of sun-lovers and shade-preferrers in assorted kindergarten Crayola colors.

Others admit they’re overmatched and seek out immediate help.

Either way, they can’t hide that deer-in-the-headlights look.

“You can see it in their face when they come in,” one long-time staff told me. “They look overwhelmed. You can tell they want to do something, but they don’t know what.”

These poor souls tend to be reluctant or “default gardeners” – maybe an inexperienced rookie tackling his first yard, a homeowner who’s decided (or been told) it’s time to finally do something about his laughing-stock “landscape,” or a single guy who one day realizes that other people seem to have plants in front of their house but none have materialized in front of his.

Reluctant guys and reluctant gals seem to approach those situations differently, according to garden-center folks.

“Women tend to ask a lot more questions, like ‘Does this come in a lighter shade of pink?'” one manager told me. “Guys start off telling you what they’re looking for, which is usually something low maintenance and that gives them color. After that, they trust us to give them whatever’s going to work.”

Another manager was more blunt: “Guys just want you to tell them what to do.”

Speaking as a long-time guy, this is fairly typical guy behavior.

Guys, in general, like to get to the point, to not waste a lot of time on cutesy details, to basically git ‘er done.

“Men like to keep this simple,” one of my garden-center sources says. “They’re thinking, ‘This is the problem, what’s the solution? We don’t need to get into a lot of nuances.'”

A typical guy doesn’t know or care much about either of those.

Females tend to be much more discerning. In fact, their whole outlook on a landscaping project is often much different than a man’s.

“Girls to tend to see the beauty,” a manager told me. “Guys tend to see the work. Women will come in with pictures from a magazine and say, ‘I want something like this.’ With guys, it’s more, ‘My wife or girlfriend has been harassing me into doing something because the yard looks like crap.'”

Once you start showing them a few things, though, guys are typically decisive about what they like and don’t like.

For starters, colors that are bright and vibrant. That means bright red, neon yellow, glowing orange, rich purple. No pale pinks, light blue or lavender. Those are wimpy colors.

Don’t even think about more discriminating shades such as taupe, mauve or magenta. What even ARE those?

And white? In the guy mind, that doesn’t even qualify as a color.

Similarly, guys want leaves that are big and bold – the bigger and bolder, the better.

If you can come up with plants that are big, bold and bright, you’ve hit the guy jackpot.

Guys also tend to like ornamental grasses, water gardens and exotic-looking plants, but nothing feathery, frilly or dainty – and especially nothing that their mother or grandmother would’ve grown.

That means no geraniums. For one thing, you have to deadhead those, and that means work. But those aren’t seen as very “macho” either. They’re plants that Aunt Sally probably had.

When men show up at the garden center, they’re by and large more at home in the nursery section with the trees and shrubs – or better yet, in the lawn-care section.

“It’s funny,” one manager told me. “I could spend hours in the grass-seed aisle with a guy, but take him outside with the flowers, and he’s done in 5 minutes.”

We’re apparently so predictable that experienced female garden-center staffers can just skip asking questions when they see that deer-in-the-headlights look.

“I had one guy come in looking for some hanging baskets,” one such staffer told me. “So I showed him this blue and red basket of SupertuniasÂ® that were bright enough to stop traffic. He says, ‘You know, lady, you never laid eyes on me, but you know exactly what I like.”

For more of George’s Current Ramblings and Readlings, visit http://georgeweigel.net.