How To Fail At Gardening 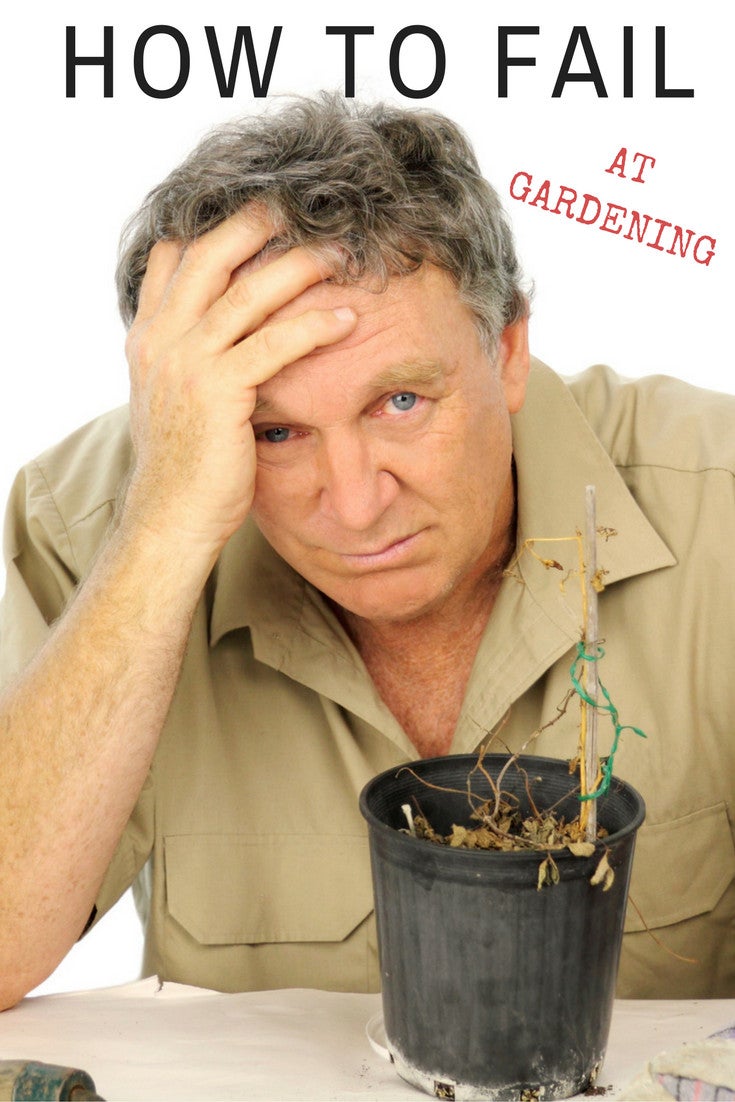 This week’s gardening guest blogger is Stefanie Gilmour, who tends a postage stamp-sized garden within a good-sized Zone 6a city. She is accompanied by her Other Half and two four-footed managers. She enjoys volunteering time tending to the city’s green spaces and canopy. Her education with all things “garden” is ongoing.Â  For more about Stefanie and her garden adventures, visit her blog, http://www.seejanedig.com.

How to Fail at Gardening

When we first moved to the Lot, the landscaping left much to be desired. Other than several shrubs planted too close to the house and garage, we had a blank canvas (a.k.a. a lawn). While hop-scotching around the city from apartment to apartment, I hadn’t felt the urge to garden. However, as soon as we had our little patch of green to call our very own, it was game over. I had the itch to grow vegetation, and I had it bad.

At first, visiting a garden center would often result in a carload of plants and a serious dip in my bank account balance. I was a whirling dervish in the nurseries. There was no attention given to “growing zones,” “mature size,” or “light requirements.” The plant was beautiful and it was coming home with me. Into the cart it went.

It didn’t take long for my reckless behavior to catch up with me on the Lot. Plants began to struggle and die. Beds became overcrowded and diseased. You mean I have to water? Wait, I have to weed? Hold on, the plants don’t wait for a break in my schedule so I can sculpt them into a breathtaking garden?!

After some years of blissful bumbling about on the Lot, I made the decision to devote time to learning about gardening. There is a certain freedom to “winging it,” but I was becoming frustrated by the results. I eventually took a Master Gardener Volunteer course through the local Extension Office. It was instant love as I dove down the rabbit hole of gardening WITH SCIENCE.

I mailed soil in to be tested, I began to memorize Latin names, I learned to prune, to plant, and to identify pests and disease. Existing plants were shuffled in the expanding beds. New plants were carefully selected and strategically placed. Rain barrels, a compost bin, and two raised vegetable beds were added. I received a vermicompost bin with red wigglers for my birthday and was elated!

The garden is no longer a lot full of pretty plants but a layered and constantly evolving ecosystem.Â Oh, and it happens to be a lovely place I can putz around in to relax. Does everyone’s garden have to be like mine? Heck no. Is the Lot perfect? No way. Do I still mess things up? Oh my, yes.

It’s Okay to Screw Up

It’s perfectly acceptable not to have a magazine-spread-perfect garden. (Those people have staff anyway.) It’s not a problem that you don’t know the Latin name for every last plant in your growing zone. It’s pretty common to at first not know the difference between top soil and potting soil.

It’s okay to not get it right all the time.

Don’t let mistakes in the garden frustrate you. Keep going. I feel a gardener should never know all the answers and have a flawless garden, but instead always be learning and growing.