How To Grow A Moss Path 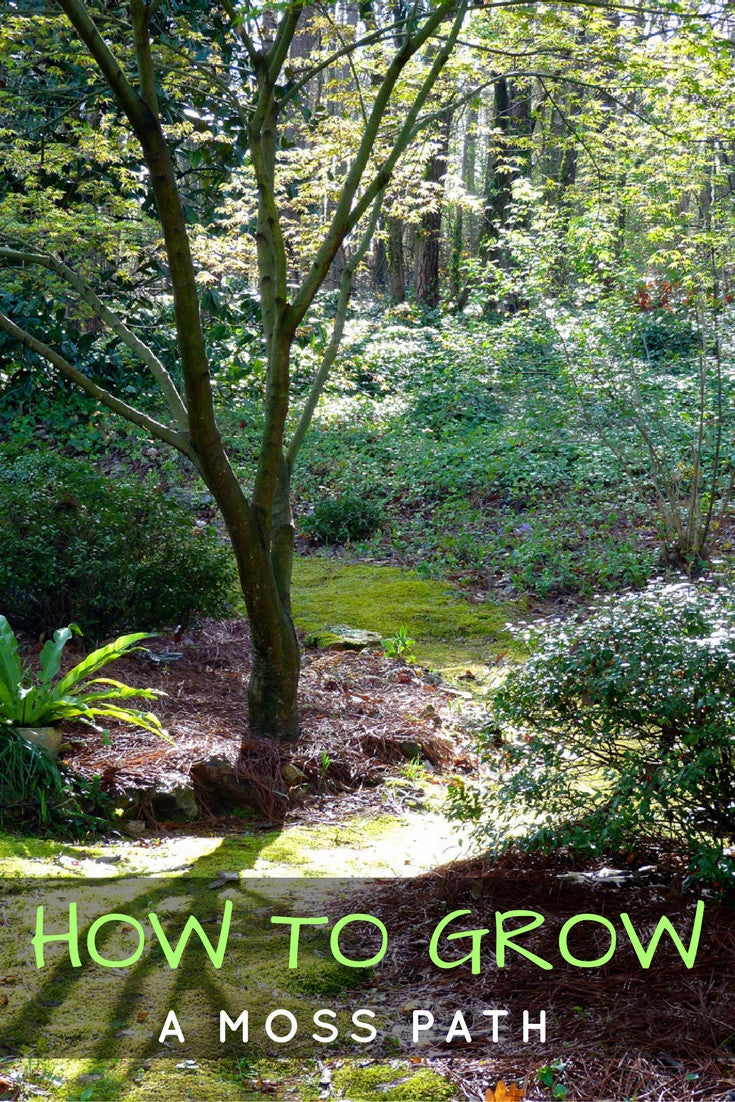 This week’s guest blogger is Deb Elliot, a plant enthusiast who speaks and writes about gardening. Deb gardens on three and one half acres of rolling, partially wooded land in Helena, Alabama.  She has published a successful garden blog, Deb’s Garden, since 2009.

Nothing contributes to the peaceful ambiance of a garden as much as a moss path meandering through it. Moss makes a wonderful, low maintenance path. The foot automatically slows when it steps on the velvety surface of moss. Walking on a moss path transports one to a hushed and older realm, far from the stress and pace of modern life.

The easiest way to find out if moss will grow in your own garden is to look for it. If you have some moss already, be assured moss can grow for you. There are about 1200 species of moss over the world, and moss will grow if the conditions are right.

Generally, moss needs damp air and some degree of shade, though there are a few mosses that will grow even in the desert. Moss often does best on acid soil, with a pH of 5-6, but not because it needs acidic soil. Many plants won’t grow in such soil; therefore, competition for the space is lessened.

This is important: For moss to thrive, the surface needs to be bare.
If you want to grow a moss path, keep the earth free of leaves and other debris. Pull weeds on a regular basis, and as moss fills in, this chore will lessen considerably. Do allow some violets and other wildflowers to grow in the moss path, to add to the romantic quality of it.

Moss has roots that anchor it to the surface, but these roots don’t absorb water or minerals. Moss absorbs moisture directly from the air and uses sunlight to produce food through photosynthesis. If moss is buried under leaves, it will not grow successfully. However, because moss doesn’t get nutrients from the soil, it can thrive where other plants fail, on poor, compacted soil and even solid surfaces such as stone or brick. Moss will also grow on trees, but fortunately it is non-parasitic, since it does not steal nourishment from its host. Moss cannot store moisture and will dehydrate during prolonged dry periods. Nevertheless, many mosses spring back to life quickly once they are rehydrated.

Moss does not produce seeds or flowers. Spores are borne on long filaments in spring, but propagation by this method is difficult. The best way to get your moss path going is by adding plugs or sheets of moss wherever you want it to spread. Moss either grows in clumps or spreads horizontally, and the spreading type is best for paths. Local moss will be most suitable to your site. Just rough up the surface of the bare ground, put the moss on it, then firmly press or step on it to help it attach. Water it in, and your moss is ready to spread. You may also shred chunks of moss and then sprinkle over the ground and water well.

If you have the right conditions, allow some moss to grow in your garden. A path or even a moss lawn may be just what you need to lower your blood pressure or to restore your frazzled spirit. Don’t have so much space? Then try a moss garden on a smaller scale. No room at all? Moss, along with a petite fern, miniature hosta or a wildflower or two, can make a delightful dish garden to sit in a window or on a patio.

Tell us what you think: Leave a comment
2 people are already talking about this.
Printer Friendly Version
Read more about Guest Gardening Bloggers
<PreviousNext>
Did you find this helpful? Share it with your friends!
FacebookTweetPinEmail