How to Grow Yarrow in Containers 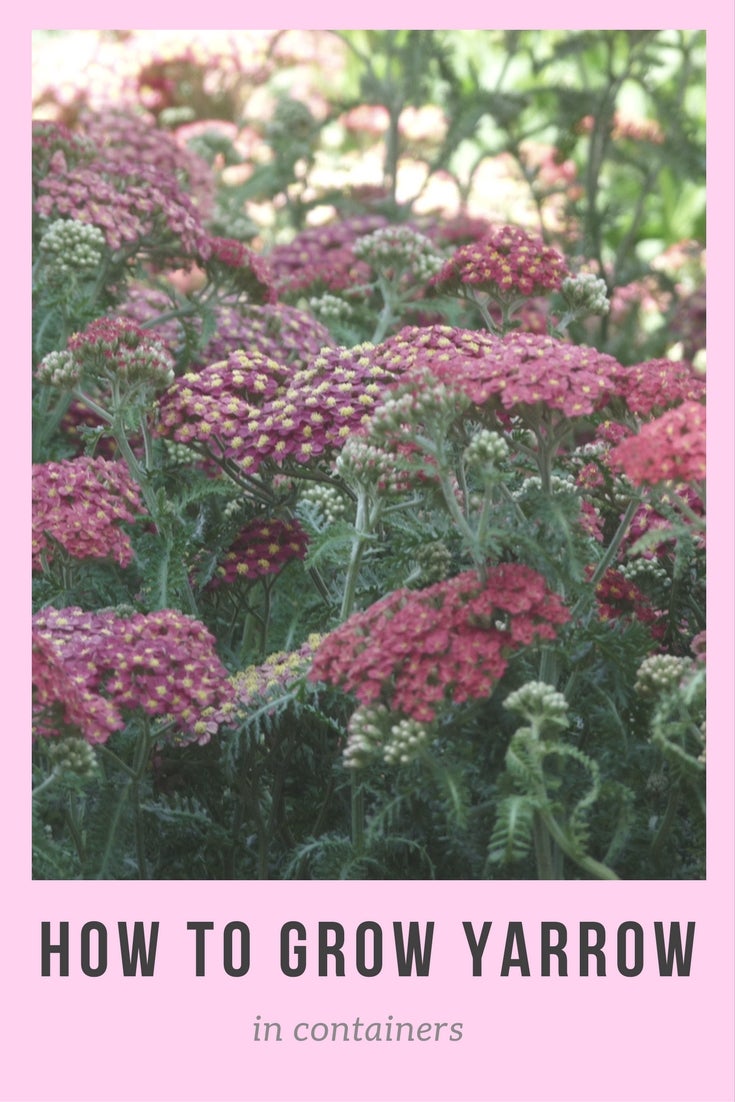 After growing up on a farm, Dan started growing food in containers when he moved to London. He writes about container gardening on his blog Urban Turnip.

Yarrow (Achillea millefolium), a member of the daisy family, is perfect for growing in containers. Whist best-known as an ornamental, it’s also completely edible, acts as a great pest deterrent, and even has a variety of medicinal properties.

Yet the list doesn’t stop there! Considering the fact that yarrow is both a perennial and extremely hardy, it’s amazing that this herb isn’t more popular.

So what’s the best way to grow yarrow in containers? Let’s have a look at a few different methods.

There are two ways to start growing yarrow. The first is to buy an established plant, which can be done online. It will usually be delivered in a small container for potting on. The second way is to start from seed.

Yarrow grows quickly, so seed is usually the better (and cheaper) option. Unusually, the seeds need light to germinate so keep them in a warm, bright spot. They can take up to three weeks to germinate.

Yarrow is very unfussy and grows in a range of different conditions in the wild. It doesn’t have any specific soil requirements, so any standard potting mix will do. If you want to blend your own mix, simply combine ? compost, ? coir and ? perlite. Forking some slow-release fertilizer into the surface of the potting soil at the beginning of spring will lead to vigorous growth through summer.

Yarrow prefers a sunny spot but, if you’re short on space, will manage quite happily in dappled shade. West and east-facing locations are perfect. It’s also a good companion plant, repelling pests whilst attracting predatory insects like wasps and ladybirds, so put your pot in amongst other edibles (or ornamentals) if possible.

Remember that yarrow is herbaceous, meaning that the foliage above the soil line will die back over winter. Through the growing season, it will reach a maximum height of between 20 to 40 inches. As with most edible container plants, use the biggest pot you can manage. Any container that’s 4 litres and above will be OK.

All parts of the yarrow plant are edible and it’s best to harvest just after flowering. The way you harvest will vary depending on whether you are planning on growing from seed every year or want to keep it as a perennial.

In either case, snip off all of the flowerheads, which make a yummy tea, when they appear. Some people will just harvest the flowers, leaving the stems and leaves intact. It’s possible to have multiple harvests in one season this way because the plant will keep producing blooms until it enters dormancy over winter.

If you want to eat the stems and leaves too then there are a few routes you can take. If you’re growing from seed every year, it’s best to harvest in one go after the appearance of flowers, cutting the main stems near the ground. Alternatively, if you want good growth next year, only snip off ? of stems, leaving the rest until they die back in autumn (flowers can all be harvested when they appear). By cutting off only a third, you’ll allow the plant to replenish its roots with nutrients that will be used for next year’s growth.

Leaves and stems are best used in salads and also make wonderful additions to soups. Flowers can be dried and used in tea.

Yarrow can be used to help with hay fever, the common cold and stomach upsets. When it’s dried, it also gives off a wonderful aroma. Try hanging a stem or cluster of flowers upside down in a room.

Tell us what you think: Leave a comment
4 people are already talking about this.
Printer Friendly Version
Read more about Guest Gardening Bloggers
<PreviousNext>
Did you find this helpful? Share it with your friends!
FacebookTweetPinEmail