Soil: We need to stop treating it like dirt! 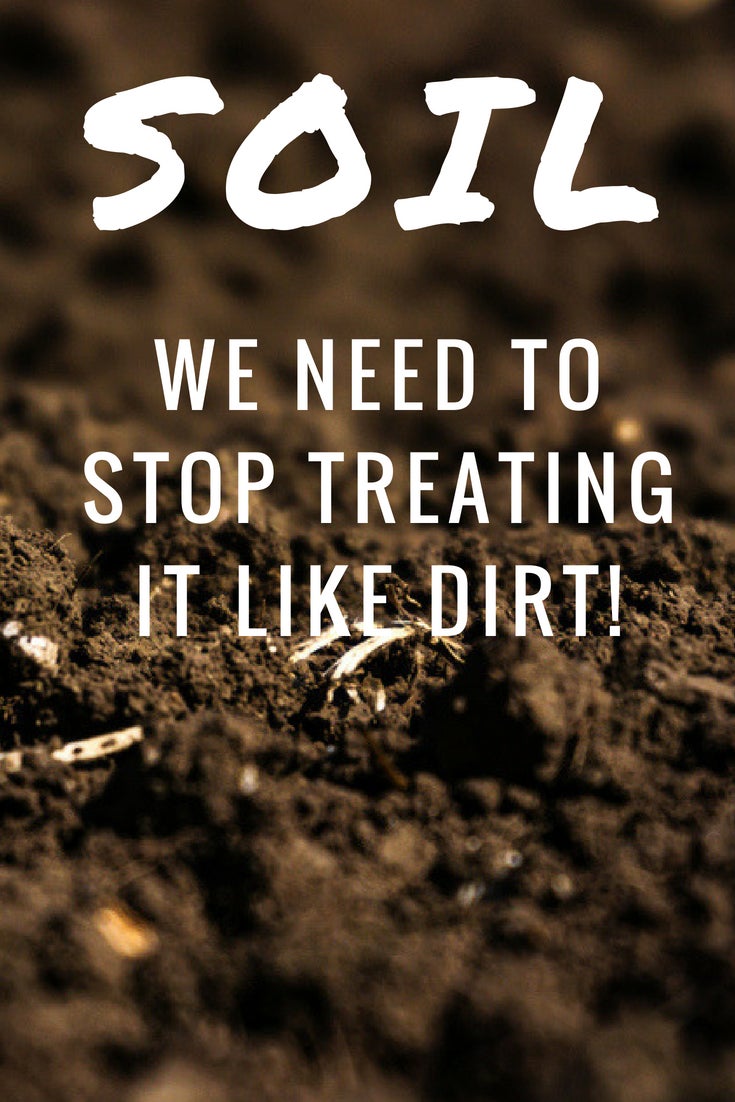 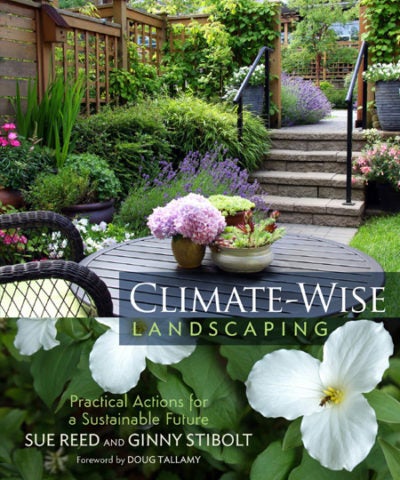 From the Foreword by Dr. Doug Tallamy: “Read this book carefully. Everything you need to know to help heal our relationship with planet earth and empower you to make a much-needed difference is within these pages.”

Ginny Stibolt, a life-long gardener, earned an MS degree in botany at the University of Maryland, but gardening is different in Florida. She’s been writing about her adventures in Florida gardening since 2004. She’s written hundreds of articles and four peer-reviewed Florida gardening books–all published by University Press of Florida. In addition, she co-wrote “Climate-Wise Landscaping: Practical Actions for a Sustainable Future“ (2018) with Sue Reed, a landscape architect in Massachusetts. “Soil” is a whole section in this new book with many more practical actions for soil healthy. For more information on Ginny and links to many of her articles, see: www.greengardeningmatters.com.

Why is soil important for gardeners?

Soil: the ecosystem beneath our feet

Soil found in native habitats is a complex ecosystem of bacteria, fungi, nematodes, earthworms, ants, salamanders, toads, insect larvae, moles, and more, all living in a substrate of minerals and humus. The minerals are a mixture of rocks, sand, silt, and/or clay. The humus or organic matter consists of fully or partially digested plant and animal parts. As humus is broken down into simple compounds, it provides a living for the decomposers, and eventually yields nutrients for plants.

One gram (about 1/5 teaspoon) of healthy, non-poisoned soil could contain one hundred million bacteria, one million actinomycetes, and one hundred thousand fungi; if strung together, their filaments or hyphae would measure about 16 feet (5 meters) in length. This same gram of soil could also contain hundreds of nematodes living on the damp surfaces of the soil particles and maybe a few insect eggs or larvae and some earthworm cocoons. The exact proportions of each of these organisms will depend on soil conditions such as moisture, aeration, amount of humus, and the local plant community growing in the soil.

Whenever a seed germinates in healthy soil, the microbial community is activated as a result of the seed’s secreting its chemical signals into the soil. Genetic information is exchanged; the various microbial players assume their positions on the tissues of the plant. This area around the plants’ roots is called the rhizosphere.

Sometimes the microbes are bacteria such as the Rhizobia that form root nodules on legumes, which help them fix nitrogen and allowing legumes to grow well in poor soil. But more often it is a fungi that form symbiotic relationships with the roots and those relationships are called mycorrhizae.

Mycorrhizae work because the fungi colonize the root system of a host plant, providing increased water and nutrient absorption capabilities while the plant provides the fungus with carbohydrates formed from photosynthesis. Mycorrhizae sometimes offer the host plant increased protection against certain pathogens.

Approximately 90% of all vascular land plants live in some association with mycorrhizal fungi. Fungi don’t have digestive systems so they break down their food externally in order to absorb elements such phosphorus and nitrogen from the soil. Plants often have difficulty obtaining and absorbing nitrogen and phosphorus, so the mycorrhizal relationship provides access to these essential compounds and elements for the plants. In return, the plant supplies the fungus with carbohydrates for use as energy.

We can see macrobes, such as earthworms, centipedes, insect larvae (grubs), beetles, ants, salamanders, toads, and more, so we probably give them more attention than the microbes. The macrobes are also carbon-based organisms that consume plant matter (both dead and alive) or other organisms. The presence of all these critters means that the soil is being aerated as they rearrange the soil for nests and for movement. In their wake, microbes make a living from their waste. Naturally aerated soil provides the perfect medium for plant roots. 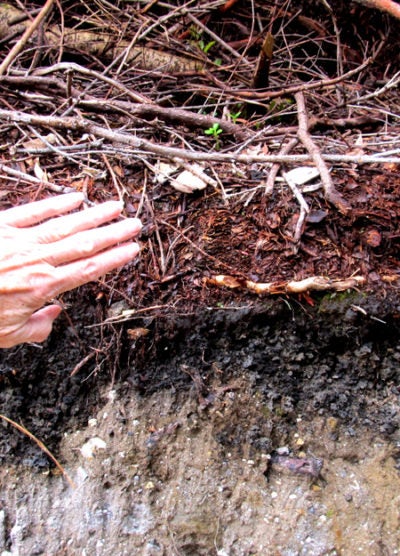 “Tropical rainforests have notoriously thin soil compared to their huge above-the-ground diversity. This is due, in part to the very high rainfall that rinses the soil nutrients away and also because the high temperatures that stimulate the soil organisms so they work at a much higher rate than in more temperate forests. But global warming may cause more widespread high activity of soil organisms and more above normal rainfall.”

Soil is the second largest CO2-absorbing medium in the world””the oceans are first. Soil sequesters four times more CO2 than all the world’s plants including forests.

Higher temperatures increase the metabolism of the whole soil ecosystem. For instance, tropical rain forest topsoils are known to be thinner than temperate forests and will quickly lose their fertility after deforestation–this is due to both the high temperatures and the huge amount of rain that rinses the nutrients away. This may be in our future even outside the tropics as the climate changes.

We have been treating our valuable soils like dirt!

Even though soil is such an important asset for our survival, for the most part, through the ages, humans have been treating our valuable soils like dirt in many ways. In ancient times slash and burn was the only way we knew to survive. Today with toxic lawn care procedures, massive deforestation, and unsustainable agricultural practices, we haven’t made that much progress. This might have been forgiven in previous times when humans were in a more primitive society and didn’t know any better. In today’s world we can see the toxic results of all this mistreatment and if we are to move forward, *things* need to change.

The good news is that soil can be rehabilitated and while there are many large-scale, long-term efforts being made by commercial agriculture and forest managers, there are also many doable actions for small property managers.

What gardeners do is important because there are millions of us

Because there are millions of gardeners, homeowners, communities, schools, churches, and municipalities that can make better decisions about how the soil is treated, we can play extremely important role in addressing climate change. Many of these climate-wise action items to improve the soil are easy to implement and in addition to taking better care of the soil in the abstract sense, you may even save money and improve your family’s health. 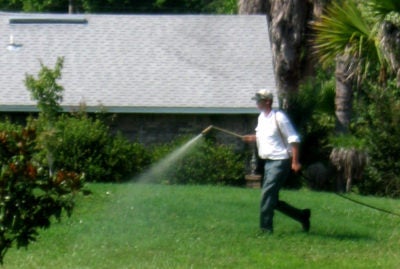 “Many people don’t give a second thought to what their lawn service is applying to their landscapes to force an unnatural monoculture. It’s likely that those chemicals are damaging to the soil in many ways. Maybe it’s time to rethink the not-so-great American lawn.”

Just think what happens when a typical lawn service applies a general fungicide to most of your landscape. The intricate dance of fungi and plant roots, which is so important to plants, is slowed down or halted. The plants with roots under the lawn may not die, but their growth and vigor will certainly decline. In addition, the lawn service will apply insecticides that will poison the mole crickets or other pests that feed on turfgrass roots, but it will also kill the other insects and other macrobes, which means that the toads and other insect eaters won’t have the prey they need to survive. The soil aerators will be stopped and the plants will have a harder time growing.

Plants need three main nutrients: nitrogen (N), phosphorous(P), and potassium(K), and myriad micronutrients, which a healthy soil will provide. But if the soil has been depleted, fertilizers can supply those needs. The plants don’t distinguished between synthetic and organic sources, but the soil reacts quite differently to each.

The presence of simple nitrogen supplied by synthetic fertilizer over-stimulates soil organisms. After this fertilizer is used up or rinsed away, the higher than natural soil organism populations then consume the reserves of soil humus and other organic matter which depletes the soil. In other words, synthetic nitrogen degrades soil. On the other hand, organic fertilizers, such as compost and fish or seaweed emulsions, provide nutrients that are attached to complex structures, which add to the soil’s humus. As a result they don’t rinse away as easily as synthetic nutrients, and don’t over-stimulate soil organisms.

When you treat your soil right, it provides 2 major climate-wise benefits

1) When the soil is not poisoned or over-stimulated by synthetic fertilizer, the volume of humus will increase and so will the population of carbon-based life forms. This healthy soil will sequester much higher volume of carbon.

2) Also when soil is healthy, plants will do better and thus be able to pull more carbon from the atmosphere.

Our only planet needs all the help it can get, so stop treating your soil like dirt!