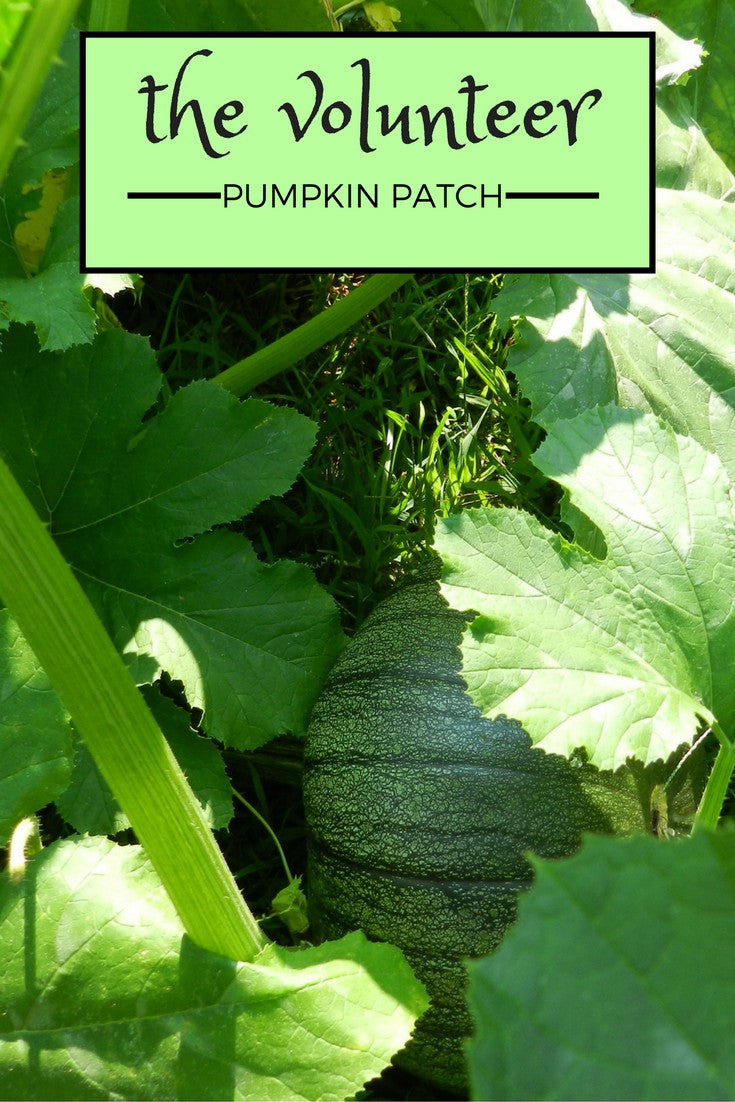 This week’s gardening guest blogger is Tina Ramsey.  Tina is a retired air traffic controller from the Army but her lifelong passion has always been gardening. She has gardened in multiple states and countries but has put roots down on her 60+ acre farm in northern Tennessee where she works ‘in the garden’ every single day. She is also an award winning landscape designer and has been blogging for eight years on her blog found at: tinaramsey.blogspot.com.

You just have to love vegetables that plant and grow themselves and pumpkins are one of those vegetables. Let me explain. Two years ago in November while on a back road I found a pile of discarded pumpkins, corn, and mums. Being the savvy person I am I thought to myself, free organic material, decorations, and perennials! So they all came home with me. The pumpkins immediately went into the above raised bed. The corn was used as an outside decoration, and the mums were planted. Well, the pumpkins rotted away as planned, the corn was used then trashed, and the mums did not survive the winter (planted too late in the season to get established). That’s the end of the story right? Nope, not so fast says the pumpkins.

In the spring of 2014 I noticed pumpkin plants growing from this garden right where I had deposited the old pumpkins. I left the vines alone and they grew and grew and grew. Pretty soon there were a few pumpkins, a few squash and lots of foliage. I did not weed the garden, nor did I water it or do anything to it at all except to pick the gourds around about the July time frame of last year. While July was a bit early to be able to store the pumpkins over for Halloween, it really was delightful picking the free pumpkins–July or not!

I then cleaned up the garden and put it to bed for the winter. This spring I weeded the garden really well, and then mulched it with cardboard and straw. It was not until about July that I saw pumpkin vines again growing from this bed. Of course I left them alone and let nature do her thing. Keep in mind I did not throw any old pumpkins in this bed last year. I think the seeds came from the pumpkins from two years ago. To me that is pretty astonishing that the pumpkin vines just kept coming. I wonder what I’ll get next year?

Pretty soon the vines tumbled out onto the lawn and pumpkins began growing! There are a total of five pumpkins and we have begun cutting them off the vines for decorations just in time for fall. This particular pumpkin began growing in and on top of the Japanese irises I had purposely planted in this bed. Several of the vines have swallowed up some roses and other perennials. The vines and leaves are monsters! But they are monsters in a good way. I have not once watered this pumpkin patch or done anything special for it, yet the pumpkins thrive, and, the pumpkin vines help to keep weeds down due to them shading the ground.

That’s my kind of vegetable…

Feel free to visit my blog where you can learn about all things…in the garden. Found at: tinaramsey.blogspot.com