What’s the Buzz? Adventures in Beekeeping! 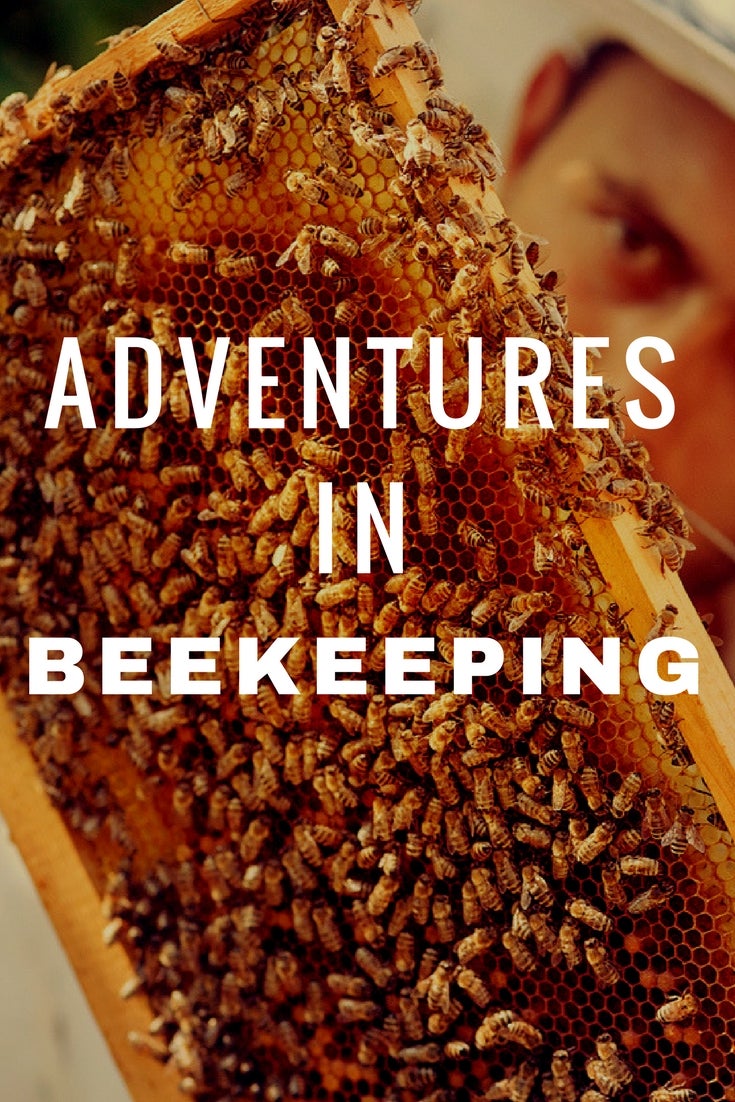 Tina Huckabee (Bee Mama) and her husband, Steven Weintraub (Bee Daddy) share beekeeping duties in Austin, Texas.Â  They adore their honeybees, as well as the other wild critters who live in and visit their garden, full-to-bursting with native-to-Texas plants.Â  It’s been a blast observing and learning about the honeybees, as well as native bees, birds, and other assorted wildlife.Â  Â Tina writes about their honeybee adventures and other garden things atÂ  My Gardener Says”¦.

I became interested in beekeeping after an intrepid group of honeybees invaded my just-abandoned Eastern Screech Owl house in May 2012. My husband and I read and mulled about, then enrolled in a beekeeping class, planning for a good empty-nest project for when our son sprouted his own set of wings and buzzed away from our hive. After bumbles with building hives, in April 2014 we hived our first two “packages” of honeybees (a package includes a clipped, mated and marked queen, plus 10,000 workers””yes, you read that correctly””10,000!). 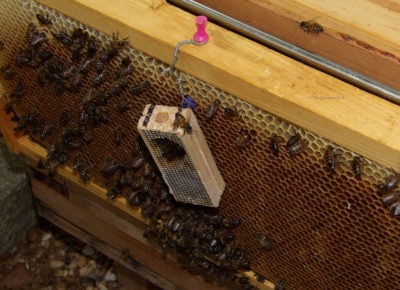 A queen and her attendants are installed in a new Langstroth hive. They will eat through a candy fondant at the bottom of the “queen cage” and make their way into the hive to the applause of the workers.

I’m an avid gardener, focused on native plants and wildlife gardening, and beekeeping certainly aligns with those gardening interests, but it’s been a fascinating endeavor on its own. Also, there is the sweet bonus of remarkably tasty honey! 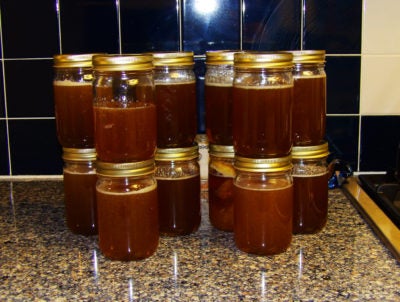 Our first hives, Warre hives we named Scar and Mufasa, are designed to emulate honeybees activites in a natural setting, like a tree hole. Warre hives utilize small, stacked boxes of the same height and width. The comb is naturally drawn downward by the busy bees, meaning that the bees don’t have a foundation on which to build their comb. The comb hangs freely from the bars, which is gorgeous, but has proven difficult to handle when we perform necessary hive checks. Industrious bees are excellent wax builders and the wax becomes frustratingly attached to everything within the hive, rendering hive checks messy with broken comb and dripping honey. Additionally, beekeeping paraphernalia, the vital tools needed to muck around in hives, is made for Langstroth hives, not Warre hives. We lost our Warre hive, Mufasa, in December 2015, to the dreaded varroa mite, but Scar flourishes, producing almost two gallons of honey during 2017. 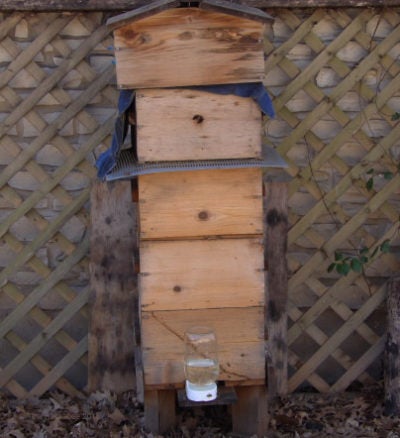 Scar, our remaining Warre hive, snuggled in for winter. The Boardman feeder contains sugar water, serving as a supplement to thwart winter starvation.

The challenges of Warre hives (for example, missing Mufasa’s varroa mites because of difficulties of delving into the hive, allowing for the varroa mite explosion which killed Mufasa), prompted our switch to Langstroth hives, which is the industry standard. In spring of 2016, we hived two Langstroths””Buzz and Woody. 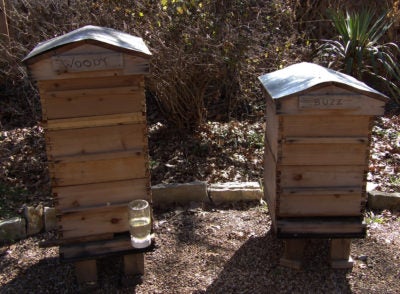 Woody and Buzz patiently await spring. Buzz died in the summer, but will receive a new package of honeybees in April. Woody is fed supplemental sugar water during winter’s dormancy.

It’s been smooth hiving with these well-designed, easy-to-use hives. Instead of a bar with fantastic, but fragile comb, the bees do their comb, honey, and larvae-raising on frames, which are much easier for us to handle. 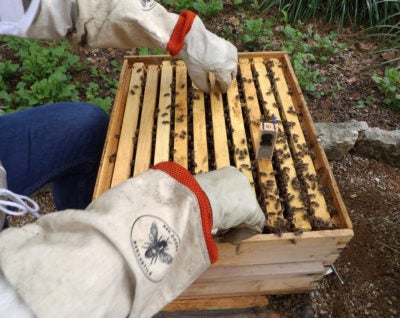 Bee Daddy checking Buzz, just before re-queening. You can see the not-yet-installed queen cage on top of a frame.

Langstroths have deep brood boxes, where the eggs, larvae, and queen reside, but also are designed for shallower boxes, holding only honey. Obviously, if the beekeeper avoids disturbing the “living quarters” of the hive, the bees are less cranky. 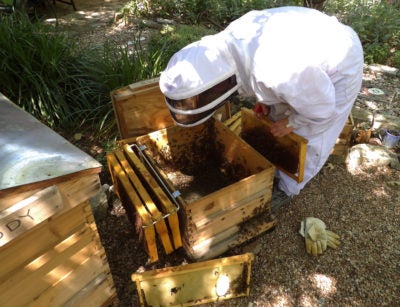 Bee Mama””yours truly””peering into Buzz. During a hive check, removed frames are held on a hanger outside the box. 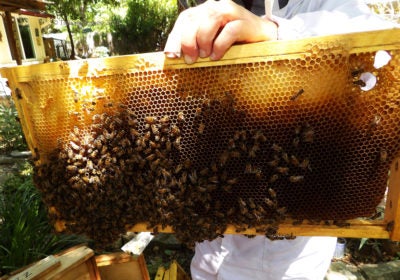 Look at that comely comb and the beautiful bees who made it.

I’ve discussed Warre and Langstroth hives, but there are other hive types and beekeepers must decide what’s right for their space, time commitment, and philosophy. I’m not sure the bees care where they do their bee deeds””they’re great at their work, whether in a tree hole, abandoned car, or human-made hives. 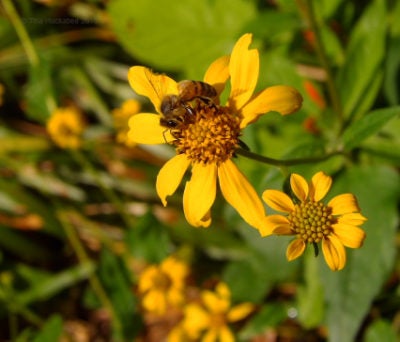 Beekeeping is two-parts science and one-part art. Bee biology is complicated and requires time and study to learn and digest. The terminology is odd, the initial investment of equipment, expensive. However, once bees are established, the work isn’t onerous, but keen observation and vigilance are necessary. We perform monthly hive checks and gather honey once or twice per year. We’ve only taken honey from our Warre hives and it’s a low-tech venture: we crush the comb (regretfully, because it’s perfect and stunningly beautiful) and let the honey drip into jars. It usually takes an afternoon or evening to complete.
The greatest threat to our bees are invasive insects like varroa, wax moth, and hive beetles””all of which our hives have endured. Mufasa died from the ravages of varroa, and last summer, Buzz died. Buzz’s sad saga is long, but this is where the “art” of beekeeping emerges. Buzz’s queen was weak; we conferred with experts, followed our own intuition and observations, but Buzz never gained strength, even after re-queening. This weakness led to the wax moth invasion, causing hive death. With more experience and understanding, we might well have saved Buzz. 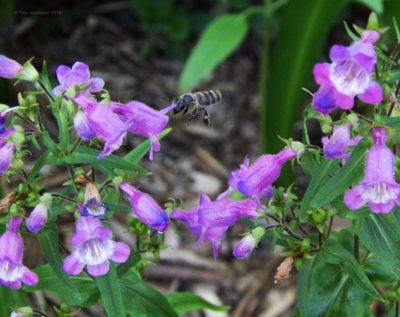 Beekeeping employs a steep learning curve, but the rewards are many. Living alongside and observing these fascinating insects is a gift. For for those who love gardens and the pollinators who bring life to gardens, beekeeping offers opportunities–and honey– in spades.