When Hail Comes To The Rose Beds/Gardens 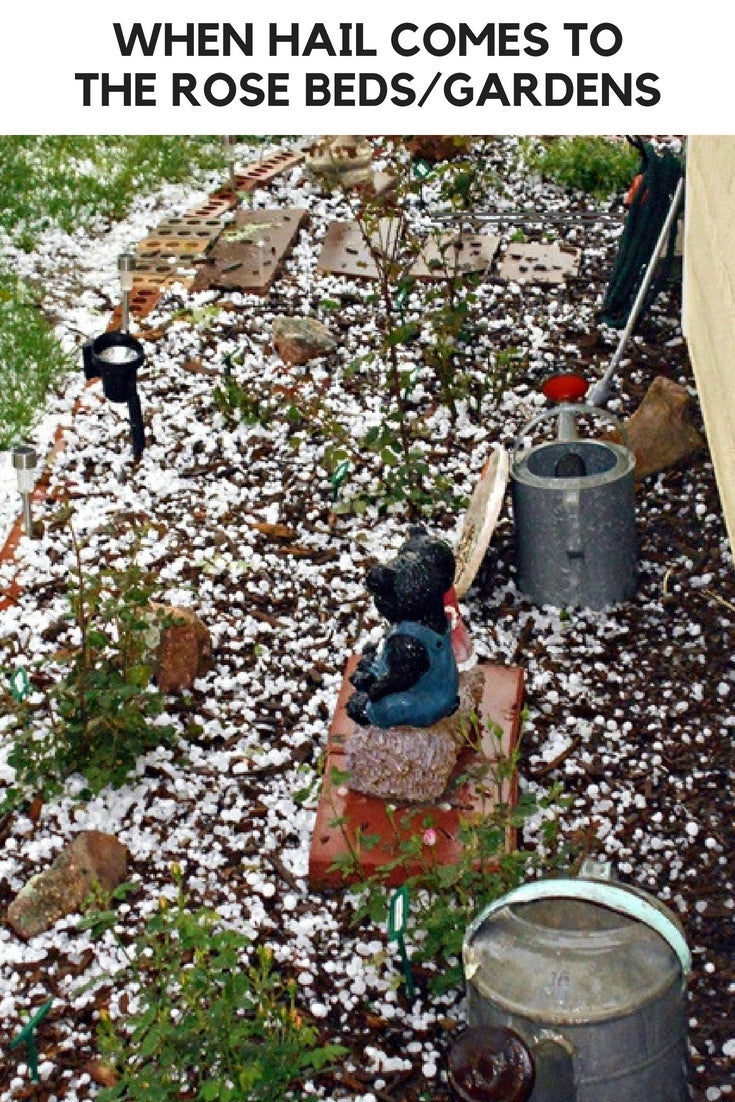 Stan Griep is an award winning rose and floral photographer.  He has 40+ years of experience growing and photographing roses in the Rocky Mountain Area.  You can enjoy photos of beautiful roses on his blog, The Colorado Rosarian.

When Mother Nature sends a Hail Storm to our rose beds and gardens, the feeling of total devastation can come to bear upon us. It is much the same as that sneaky late frost that destroys all that it touches in our gardens. Even though the sight of the devastation can be nearly overwhelming, there is still hope. Here in my home State of Colorado we seem to get hail storms quite often. Some are small pea sized hail storms that rip the rosebushes leaves or leave holes in them. Others may range from quarter sized to golf ball sized and even softball sized hail stones!

One of our first reactions after the storm has passed is to Do Something Immediately!!  Or perhaps to throw our hands up in despair, utter some choice words and give up. Both of these reactions are certainly understandable, yet both may not be the best reactions for the roses or other plants in our gardens. Those roses and plants need us to stop and think things through for a minute or two. For the roses it is usually best to wait for at least 24 hours before doing anything, unless the storm has perhaps knocked a tree down or broken a big limb out of a tree that is laying upon a bush or several bushes, in such a case it is best to remove those items from their crushing position ASAP. This waiting period is a time when the rose bushes are trying to deal with the total shock of what has just happened to them. Some of our actions can actually be adding more to their shock and stress. Some folks will immediately begin pruning them up and then give them a big dose of fertilizer at the same time. Pruning does bring some shock and stress to them no matter when we do it but is more tolerable as part of our normal deadheading, Spring or Fall pruning schedules. I recommend waiting at least 24 hours before going out and doing anything in the rose beds or gardens. Give them all a chance to put forth their normal defenses to the attack they have just been subjected to. The same Mother Nature that brought the storm to bear upon them also gave them some defense mechanisms to start towards recovery. I am speaking to rose bushes of all kinds here only as some other garden plants, depending on the severity of attack and size of hail stones, will be down for the count and need total replacement. Many rosebushes are tougher than we may think though and will recover and show us their beautiful blooms again the very same season. Hold off on the fertilizer too for a while as a high nitrogen fertilizer given at such times can have a disastrous effect upon the rosebushes root systems.

I had one very nice rosebush that was run over by a landscaper with a skid loader. He did a major number on that rosebush and over half of it was smashed down and the canes broken off. What was left looked more like a new miniature rose planting! Yet with the care regimen I gave her, the rosebush came back and bloomed nicely.

After 24 hours, go out and inspect each rosebush to see what all the damages are. Prune out all broken or badly bent over canes. Rake all loose leaves and other debris from around the rosebushes. Water all of the rosebushes with some water that has both a product called Super Thrive and a couple tablespoons of Epsom Salts in it (typical two-gallon watering can). Give each of them at least a gallon of the mix. Use a fresh batch of this mix the next two times they need watering. The Super Thrive is not a fertilizer it is more of a vitamin tonic for them that goes a very long way to helping them deal with shock and stress.  The Epsom Salts encourage basal breaks, the formation of new canes, which is a very good thing at this time.

The amount of Epsom Salts at this time is not much as it is just a little nudge in the right direction for the roses. This same mix is good for most plants in this recovery period. After a couple waterings with the mentioned mix, I change things up a bit by adding a root stimulator product to the mix along with the Super Thrive and drop the Epsom Salts. I water the rosebushes with the super thrive and root stimulator mix the next 5 to 6 times they need watering. The root stimulator helps get the root system geared up to provide all the top part of the bushes need to quicken their recovery. After a couple weeks, sprinkle 1/3 cup of Epsom Salts around the base of each rosebush, work it lightly into the soils and water it in with the super thrive and root stimulator mix water. At the three to four weeks mark, it should be just fine to give the rosebushes a feeding with some water-soluble fertilizer that has a well-balanced N-P-K. I typically like to use a fertilizer that may be higher in the P and or K portions as the boost those give is better at this time. Remember that the N is for Up of the upper portion of the plant, the P is for Down or the root system of the plant and K is for All Around as it benefits the entire plant or bush as a whole.

The above noted method and treatment has worked well for me and others in my area for many years now, I sincerely hope that it will be a help to all Gardeners in such tough times in your gardens and rose beds.