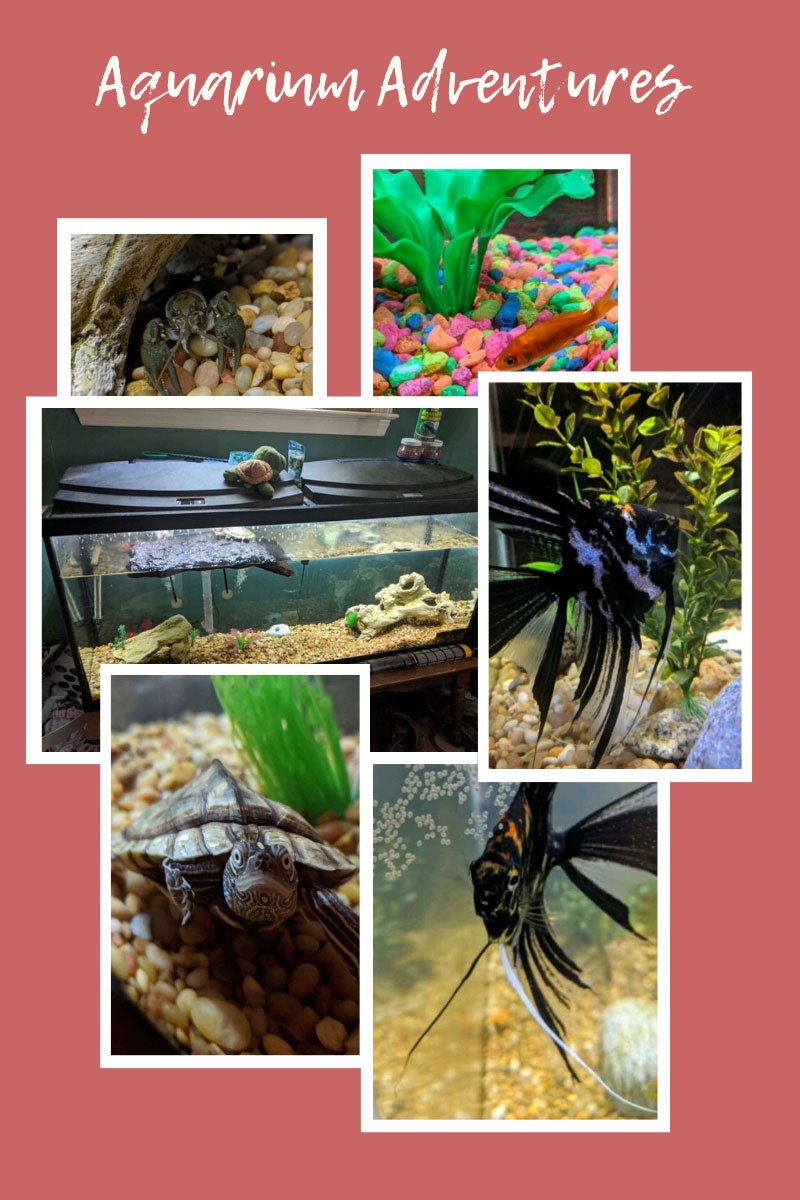 I began my fish keeping journey about six years ago, and in that time have I’ve learned a lot. Read on for some of my best aquarium adventures, and lessons learned in the process.

My very first tank was set up with pink and purple plants and gravel, funny little “road” signs, and six fish named after characters from The Little Mermaid. It was on my kitchen table and before I left for work one morning, I opened up my curtains. I thought they would enjoy the nice sunshine-y day. Well, lesson one learned. I came home and all my fish were fried. While sunlight can be good for some fish, this was not the case with this particular group.

Not long after, I had an “algae eater.” Even though they’re sold at local pet stores as algae eaters, this is actually not true. Her name was Marina del Rey and she was a Chinese algae eater. As she got older, she started sucking the scales off her other tank mates, eventually killing them. With research I learned these fish actually like a meaty diet as they age and should be given frozen bloodworms, brine shrimp, and the like. We finally had the tank set up just for her with little nooks, crannies, and caves she enjoyed. I had her for many years.

Years later, my stepdaughters each won pretty calico goldfish at the local fair. Another lesson soon followed. Not long after placing them in the tank, Marina del Rey died. I later found out that because so much ammonia is put into the water from goldfish, it can be harmful to other fish. I had never had goldfish before and didn’t know this. I did, however, keep them alive for many years. When one passed away, the other wasn’t far behind (due to grief perhaps). If you didn’t know this about goldfish, it is recommended they be kept in pairs for companionship.

Back to sunlight and your fish tank. Being placed directly in sunlight can cause a tank’s water to heat up too much for some fish. For others, sunlight is said to be good for coloration. Thermometers and heaters are best to maintain temperature your particular fish needs. Sunlight can also cause the growth of algae to intensify. This can be a negative or a positive. In a tank with fish or other species who feed on algae, it’s beneficial. In others, though, algae can quickly take over. My son has a betta who sits by my desk next to a window (I like to think he enjoys watching outside). While it doesn’t get direct sunlight, I have to clean the tank more frequently than any of the others.

It’s also important to be mindful of your décor and keep an eye on your fish for safety. We have had fish grow and then become stuck in a tunnel they once fit in. Fins get twisted or tangled in plastic plants too. Sometimes, fish escape their tanks. I had a set of bettas who were not housed together but their tanks were side by side. They were somehow jumping into one another’s tank to fight. We never caught them in the act but would always find them together in one tank. Arrangements had to be made to ensure they didn’t end up harming each other. Also, look out for cuts and scrapes or damaged fins on your fish, as bacterial infections can be harmful.

It’s definitely an experience and one that can be rewarding (and stressful). I’ve had fish who grew pretty big, some I’ve gotten attached to, and those that lived many years. Some would be happy to see me come home from work, others enjoyed my company by their tanks, and there were fish that got excited for food. One little betta would practically jump out of the water to eat out of my hand. I’ve also had some that, for whatever reason, didn’t live that long. I’ve never had much luck keeping guppies alive.

We currently have a trio of angelfish. Two of them have paired up and not only did they kill every other tank mate they had, they started bullying the ‘odd man out.’ I set him up in a separate mini-tank so that if he died, it would at least be peacefully. He’s banged up and missing some fins, but he seems to be thriving now in his own space. The pair have gone on to lay several batches of eggs; they just laid a new one last night, and successfully hatched two so far.

Since keeping fish as pets, I have begun keeping other aquatic critters too. There have been several water snails. I enjoy the golden mystery snails and my favorite was named Gary. He grew to be the biggest snail I’ve ever kept; it was a sad day when he passed. We’ve also had several black mystery snails. They help maintain algae and cleanup in the tank. Right now, we have a baby snail, Miniscule, that lives with our betta. I also had some of the African dwarf frogs who were really fun. We used one tank to grow Ted the tadpole. He turned into one of those super tiny little frogs, so small you barely see them.

I started keeping water turtles five years ago. Currently, I just have Spike, a Mississippi map turtle, but have also had yellow-bellied sliders, a hybrid yellow belly and red-eared slider, and a small painted turtle. We keep ghost shrimps in the turtle tank to help with cleanup and a few minnows as snacks. When Spike was first moved to his own tank, we had a golden algae eater in there as well. It was the neatest thing to watch as these two became good friends. Sadly, little gold passed away several years later. I felt bad for him being without his pal, but now he has a new buddy.

Several months ago, Marie Laveau, the crayfish, was added to the tank. I wasn’t sure how things would go at first, but Spike seems to have taken a liking to her. They’ve even been caught teaming up and working together to catch minnows in the tank, then sharing the meal. Marie Laveau also helps keep the tank tidy. It was just discovered while providing a honeydew and cantaloupe snack for Spike that our crawdad friend also really, really enjoys melon. It was entertaining watching her gather up the fruit, race around the tank with it in her pinchers, and hiding it in her little burrow.

For a beginner aquarium tank, I strongly recommend doing your research beforehand. I just jumped in not really prepared for what I was getting into. While I did learn a lot that way, several fish paid the price for it, and there were some very trying times. There is also more work involved with keeping aquarium critters than just dumping them in a container of water and letting them go.