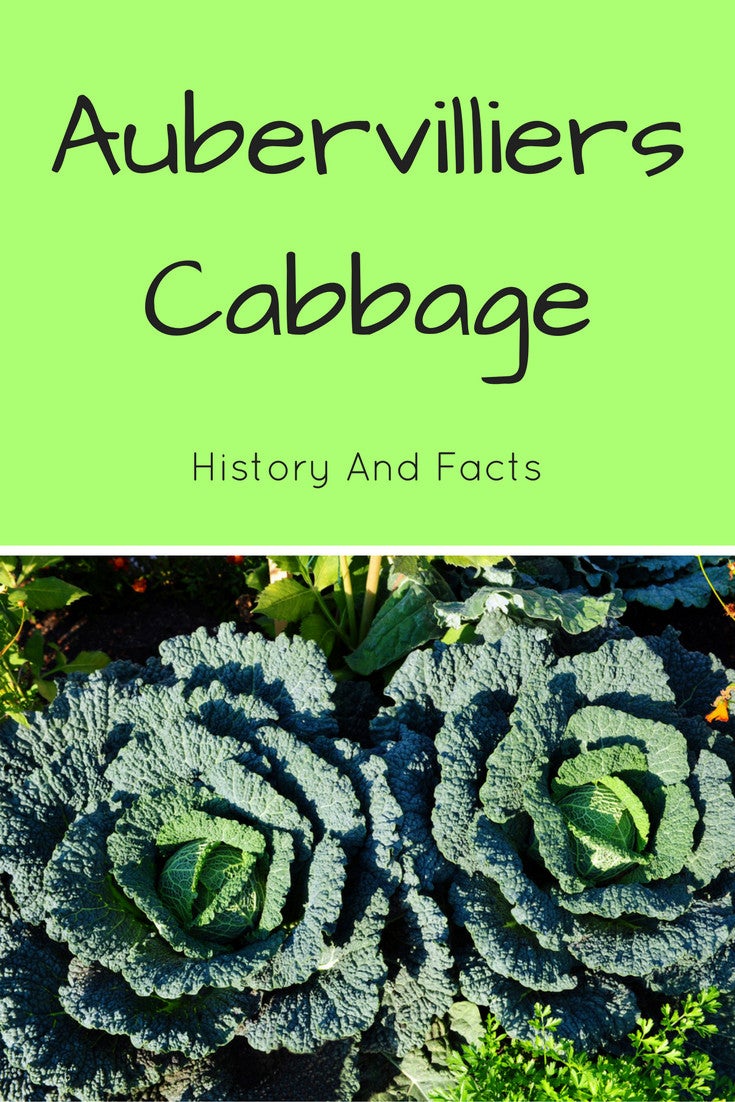 I remember sneaking about my grandmother’s garden as a little girl, awed and amazed by the variety of fruits and vegetables she and my grandpa were growing. Most of the produce were varieties not found in the supermarket and had origins from great grandma’s garden or were brought over from Germany and part of the family seed bank. Heirloom cabbage plants were prominent features in that robust and magical garden. I’m not sure the Aubervilliers cabbage plant was one of them, but it would have fit right into the range of precious fruits and vegetables that had been grown and revered for generations in that fertile ground.

Aubervilliers is a town in Paris, France with an important industrial and religious history. It was also the seat of fertile lands bordered by canals, which were so rich and verdant they produced much of the near countryside’s food. In fact, Aubervilliers is famous for its cabbage fields and the Aubervilliers cabbage history originates on this French soil. Cabbage snobs might call this produce a Savoy, but to the rest of us, it’s just delicious and sweet with just the right amount of bite and crunch.

No one is exactly sure when cabbage was first domesticated. It is thought to have been cultivated as early as 1,000 BC and become a go-to food by the Middle Ages. Savoy cabbage, to which Aubervilliers cabbage plant is classed, was not grown until the 16th century and not widely recognized until nearly the 19th century. During this time, many of the more commonly grown forms of cabbage were hybridized.

Natural hybridization occurs frequently in most of our favorite vegetables, leading to fun and exciting forms and flavors. The rich, loamy soil of this part of the Ile de France is fed by the Seine River tributaries that etch across the landscape. River deposits have created a perfect farming region which, historically, is the center of much of the French cuisine offerings.

If you are fortunate enough to acquire Aubervillier seeds, start a seed saving program to secure that particular form. Seed saving lets you share with friends and family and continue the tradition of a time honored garden favorite.

Preserving heirloom cabbage plants and other historic produce is an important heritage responsibility. Protecting the seed banks of our ancestor’s food crops ensures continued diversity in future farming and allows us to glimpse the past and enjoy the unique fruits and vegetables of a time long gone.

In fact, the vegetable provided food for the Paris region well into the cold season. Aubervilliers produces a 3-pound head of cabbage in just over 70 days, making it a fast late crop having a variety of culinary applications, such as cabbage soup and cabbage galette.

Brassica oleracea capitata sabauda is the scientific salutation for the Aubervilliers’ heirloom cabbage. While this sounds like a mouthful, it is an important designation for heirloom seed savers and biological geneticists. Aubervilliers is a brassica and keeping seed for future crops requires you to have numerous plants to keep a genetic balance. This is due to the cabbage’s pollination scheme which transfers pollen from plant to plant.

You need a minimum of ten plants to protect the genetic purity of the cabbage. Sow seeds outside in prepared beds 12 to 14 weeks before your first frost. Thin the plants when they are 3 inches tall to one cabbage per 20 inches. Use the thinned plants in salad and stir fry.

You can harvest young cabbages early or wait until heads are firm when squeezed, generally well into fall. Save the stalks of the plants in damp sand in a cooler until spring. Replant them and allow the cabbage to flower and set seed. This will ensure a consistent supply of this old-fashioned cabbage with appealing flavor and texture.